Emerging economies include those regions which are experiencing rapid industrialization. As such emerging markets comprises of the economies with greater prospects of rapid economic growth as compared to other developing economies. There are different policies which have resulted into such rapid growth of emerging markets and inflation targeting is one such approach.

Don't use plagiarized sources. Get your custom essay on
“ Inflation Targeting ”
Get custom paper
NEW! smart matching with writer

This is mostly achieved through adjusting the prevailing interest rates in the economy so that a desired balance in economic variables can be achieved. The whole idea behind such approach is based on the inverse relationship between the interest rates and the inflation.

By adopting an inflation targeting approach by emerging economies they basically create an inertial inflation within the economy where prices are set in accordance with the changes in the price index which is in fact changed through targeting inflation by keeping it under certain pre-meditated range.

It has been argued that inflation targeting allow anchored inflation expectations in future therefore the investors can better equip themselves by tailoring strategies in such a way that the impact of inflation is minimal on their overall investment portfolio. Further, since under this approach, inflation expectations remain stable therefore such stability lengthens the yield curve of fixed income securities.

If inflationary effects under the inflation targeting approach are greater or beyond the expectations, the monetary authorities in the country have to adjust monetary as well as fiscal policies in order to off-set the inflationary pressures on the exchange rates. Due to this, the exchange rate pass through phenomenon effectively reverse the impacts of inflation targeting, if it is not within the acceptable ranges and because of the pass through effects on the import prices due to changes in the foreign exchange value.

Historically, the impacts of pass through on the emerging economies is relatively larger than the developed countries therefore the devaluation of currency is mostly pass through to the import prices etc. It is therefore also important to consider the role of the real exchange rates in the economy while assessing the impact of pass through phenomenon under inflation targeting approaches. (Edwards, 2006)

Further, inflation may not remain under the desired level if it is increased due to the factors which are external to the economy such as increase in prices of oil or food at international level etc. however, similarly, on the other hand, with the adaptation of inflation targeting, the pass through phenomenon generally reduces which therefore allow the countries to achieve the desired level of inflation without sacrificing other important economic variables such as foreign exchange as well as interest rates. The example of Chile is often cited as one of the brightest examples of the relative success which inflation targeting can offer to the economies of emerging markets. 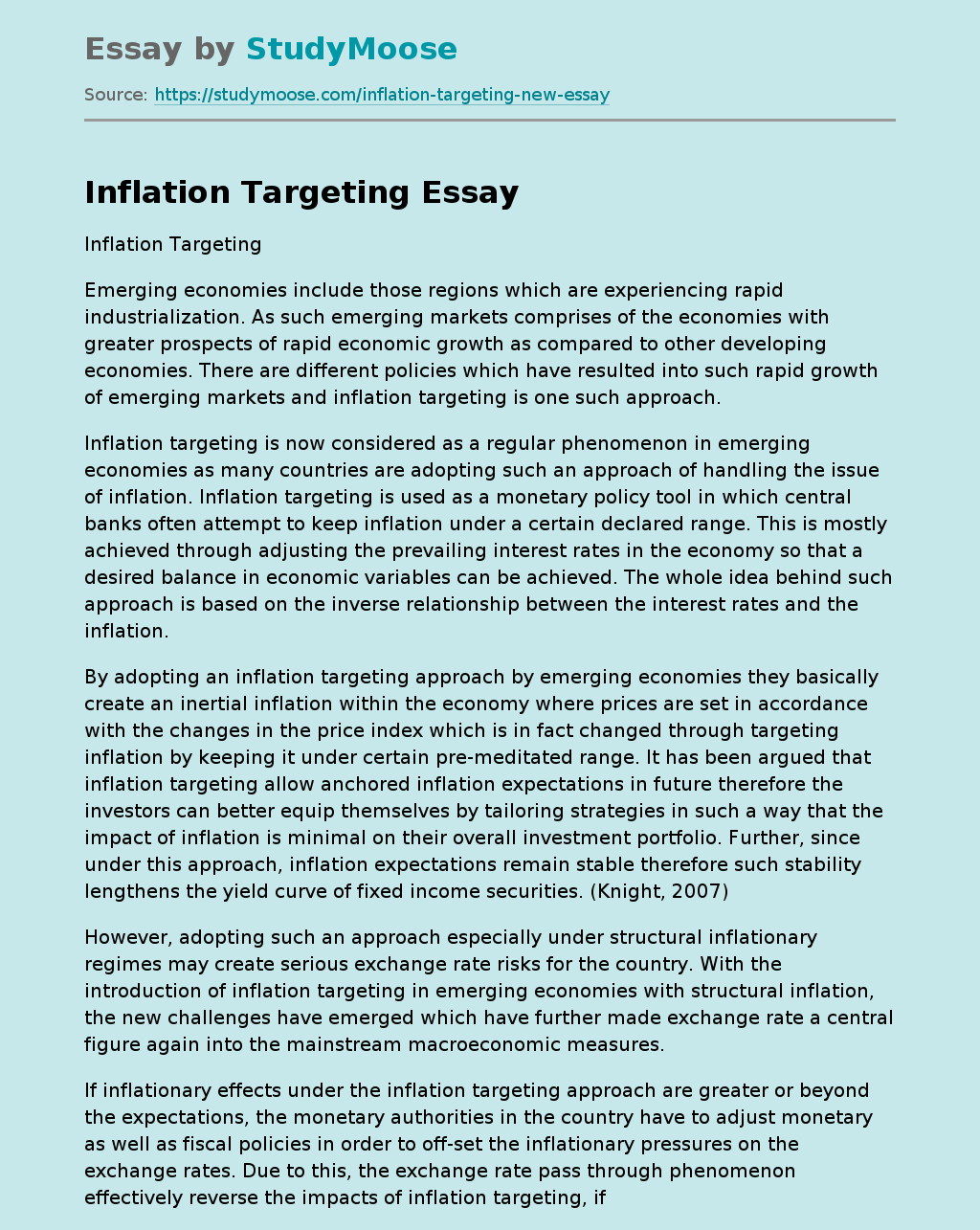