In the Land of the Free About Relationship

Literature or the arts of written works play an important role in contributing to the body of knowledge about the world. The works of various authors is not made to merely entertain the people but it has a greater role of enlightening them. Their works tend to capture the important events and the situation of the society with regards to the particular time frame that their written works captured. Literature is also a form of expression wherein authors could show their deepest emotions and even make a commentary of the problems in the society.

Don't use plagiarized sources. Get your custom essay on
“ In the Land of the Free About Relationship ”
Get custom paper
NEW! smart matching with writer

In this sense, literary works have an essential contribution in letting the general public understand their historical past, their present situation, and the things they can expect in the future. More than that, literature helps an individual to understand the vital lessons in life through the words that an author wrote that poignantly move an individual to a greater realization of life. A very brilliant author by the name of Sui Sin Far created one of the most notable literary works in history.

This is exemplified in one of her selections entitled “In the Land of the Free. ”

Summary of “In the Land of the Free” This short story started with the reunion of a Chinese couple, Hom Hing and Lae Choo. The couple has to part ways because of the desire of Lae Choo to give birth in China while Hom Hing has to stay in the United States because of their small grocery store in San Francisco.

During the time of his wife and son’s arrival, Hom Hing has to wait longer as compared with the others as the United States Customs detained him. When he already saw his wife and son on the steamboat and they were about to leave, the customs informed them that they could not take their son with them.

The customs told them that they have to take the child, as there is no proof that the boy is really the couple’s son. Lae Choo met this news with great distress, as she does not want to be away from her son. However, they cannot do anything. Hom Hing just console and pacify his wife with the knowledge that their son will only be away for one day (Far et. al. , 1995). The next day comes but Lae Choo’s hopes of seeing her son turned into a huge disappoint when Hom Hing went home empty handed. The one-day of being apart from their son turned into numerous months.

Lae Choo was already in a great state of depression and Hom Hing was very much worried about the condition of his wife. Then, one day, a lawyer by the name of James Clancy, offered his services to the Chinese couple in exchange for a large amount of money. Lae Choo has to give him all of her jewelries as payment to lawyer just for him to get her son back. Later on, Lae Choo was able to go to his son in a place that was run by social workers. However, the moment Lae Choo saw her son and she was inviting him to her arms, the child no longer recognized her and he uttered this painful words toward his mother “Go’way, go’ way!

” (Far et. al. , 1995). Analysis “In the land of the Free” it discusses important political and social issues during that time which still persist up to this present time. First, it points out the human costs of bureaucratic and discriminatory laws (Ling, n. d. ). This is clearly observable in the laws that were applied by the United States Customs to the family of Hom Hing wherein due to the rules that they applied the couple’s son is taken away from them. This exemplifies the there are laws that disregard the sensitivity of the people by which it is applied to.

The slow bureaucratic system also further heightens the ill effects of this law because the couple has to wait for many months before they get to see their child again. Second, the story also highlights the discrimination that exists during that time. This is proven during the incident wherein Hom Hing was detained longer as compared to the other people waiting to fetch their relatives because of his racial identity. In relation to this, discrimination is also visible when the United States Customs simply and immediately decided on taking the couple’s so without any due process of the law.

Moreover, the helplessness and the inability of the Hom Hing family to do the necessary steps to petition for the government to get their son back is also a sign of unequal treatment for the Chinese people. The couple even has to pay a large sum of money to a White lawyer in order to get their son back. In this sense, it is quite noticeable that white Americans have more power and authority in the government and in the country as compared to the Chinese immigrants. Social Context

Even though the Chinese were never enslaved by the Americans like the African-Americans they still experience racial discrimination because they were regarded by the majority of Americans as an alien race with weird customs and habits. The oriental culture that they have made it difficult for them to assimilate in a nation that wanted to preserve the white dominion. Moreover, the Chinese immigrants were also seen as a threat for American laborers because they consented to work for lower wages, which make them targets of racial violence (Ling, n. d. ).

The written works of Edith Eaton paved the way for the greater realization of this ill situation that the Chinese immigrants have to go through. In the story of “In the Land of the Free” she was able to show the irony of the Chinese people living in America. This is due to the fact that America, which is considered as the land of the free, is merely facade because there are people like the Chinese minority who do not experience freedom or equality but actually have to suffer the exact opposite of these values that the Americans give so much importance to.

The efforts and works of Edith Eaton shows how an individual wants to use the power of the pen in order to inflict change. She wants more people to become aware of the real problems in the Americans society especially with regards to the situation of racial minority. As a result, Edith Eaton succeeded in becoming the first Asian-American woman writer that left an important mark in the American literature as well as that of the world.

In the Land of the Free About Relationship. (2016, Sep 25). Retrieved from https://studymoose.com/in-the-land-of-the-free-about-relationship-essay 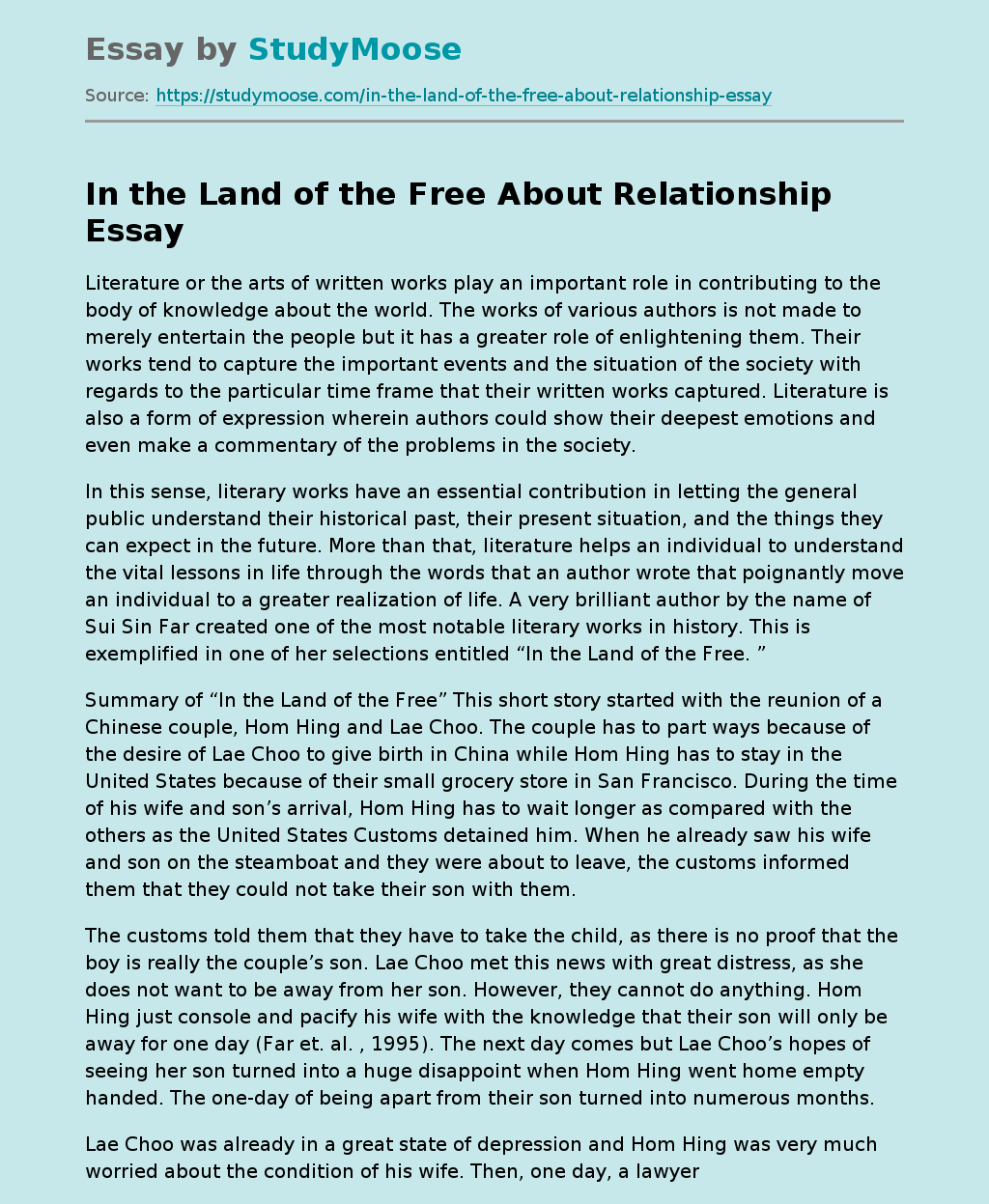