Importance of The Nile River

We have the world filled with people, towns, cities, and tons more stuff, but what really covers two-thirds of the Earthś surface is water. When the world adds more populations in our world than our water sources increases. In our world, we have so many rivers and oceans, but the one river that is fresh and produces water the most is the Nile River.

Information About the Nile River

The Nile River is in Africa. The name Nile comes from the Greek word “Neilos”, which means valley.

Don't use plagiarized sources. Get your custom essay on
“ Importance of The Nile River ”
Get custom paper
NEW! smart matching with writer

The Nile starts in Burundi and flows northward through Northeastern Africa. It flows through Egypt and dumps into the Mediterranean Sea. The Nile River is 6,670 km (4,160 miles) in length and is the longest river in the world. The Nile River had a huge impact on Egyptian history because of wildlife, plants and the flooding. The wildlife had an impact on Egyptian history because of the, Nile crocodile, its diet and the Nile Perch. The Nile crocodile is a reptile that can reach a length of over 10 feet and weigh up to 1,500 pounds.

Crocodiles swim with their tales, although their back feet are webbed, they barely use them under water. The Nile crocodile mostly hunts gazelle, buffalo, wild dogs and wildebeest. It uses its strong teeth to pull the animal under water until it drowns, then waits for it to rot and eats it. The crocodile were hunted by the Egyptians for the skin. The Nile Perch can grow up to be 6 feet long. It can weigh up to 440 pounds.

The plants had an impact on the Egyptians also because there was plenty to eat and grow. They grew crops like vines, pomegranates, melons, figs, vegetables and wheat or barley. The floods supplied the water and rich soil needed to help grow the crop. The Ancient Egyptians also grew flax which is then made into linen. Reeds also called Papyrus grew near the Nile providing supplies to weave. Papyrus means “That which belongs to the house. ” The English word paper is from the word papyrus. Other plants around the Nile include: ebony, banana, rubber, bamboo and coffee shrub.

Found in the Nile River are lotus, paper reed, fig, date palm and mulberries. Plants had a big impact and I think they will for a long time. Flooding of the Nile River was a great help to the Egyptians. The rains in Africa and the Ethiopian highlands along with the melting snow caused the Nile River to flood. With the flood, the Egyptians could water their crops and retrieve rich fertile soil. The Egyptians used a tool called a Nilometer to record how high the Nile was during that year. If the flood was too high, it would destroy the crops. If the flood was too low, there was famine.

The Ancient Egyptians called the River Ar or Aur (which means black) because of the fertile soil left behind after the flood. Because of the flooding, the bank of the Nile is called the Blackland. That is why the Nile River had an impact on the Egyptians. The Nile River had a huge impact on Egyptian history because of the wildlife, plants and flooding. Kids learn a lot about Egypt and it is important they know about Egypt and its history. We would not have this history if it wasn’t for the Egyptians and the Nile. It was very important and still is and will be for a very long time.

Why is the Nile River Important?

As the Nile River kept flowing down its trail, it would leave thick, rich mud which was good for the Egyptian population. The nice rich mud, was excellent soil and that reason was because the soil was good to plant seeds in. The Egyptians would plant seeds to grow good crops. They would only plant seeds and receive the mud when it has been left behind from the river. When the Egyptians had their nice mud, they would have fields filled with crops all along the Nile River. The top crops they would plant along their fields are wheat, flax, and papyrus. Why is the Nile River important to Egypt? Since the Nile River has so many says to it, through a myth, the Nile was holding up people’s lives which made it important to every person’s life. The gods were mostly involved in the life of the Nile River and that is because of all of the river´s annual floods. ¨ The Nile was held up to the Ancient people as the source of all life in Egypt and an integral part of the life of the gods.¨

Why is the Nile River in Jeopardy (Egypt)?

The Nile River is in jeopardy because of a dam. In 1843, a dam was decided to get build across the Nile. The dam was 12 miles down to the city of Cairo. The dam was talked about for a while, but it was actually completed in 1861. After the dam was extended and improved, it may be marked as the beginning of the modern irrigation in the Nile valley. In the year 1901, the Zifta Barrage was added to the system. Only a year later, 1902, the Asyut Barrage was more than 200 miles upstream from Cairo. Then there was a first dam at Aswan that was built between 1899 and 1902. After years and years, the dam has been enlarged. In 1929 and 1934, the water level rose, but the dam’s capacity increased. The Aswan Dam was located to 600 miles upstream from Cairo and 4 miles upstream towards the actual Aswan dam that was created. What really the dam job was to do was to control the Nile water so the crops could get provided with water. All of this hard work started in 1959 and then was completed in 1970.

Why is the Dam Causing so Many Problems?

People in Egypt are fearing about the dam because it can cause so many problems. The people there and around the world are having fears about the water supply because it could cut into it. If it doesn’t cut into the water supply, then it can cause destroying parts of the farmland and lose water shortages. This all can hit up to 93 million people. If this impact happens, it could also affect the downstream, which crops are planted. No one really knows what the impact is really going to cause, but the Nile nations say that is is unfair and that they should ignore the needs of their own large populations.

All in all, towns, cities, lands, rivers are something that is covered in the whole world, but we all know that rivers are something important in our world and that without this water the world wouldn’t´ have crops. People in the Egyptian world prove that caring for people and crops shows how much the world comes together because of the Nile River. In all of our saying is that the Nile River is a big impact on our community and world.

Importance of The Nile River. (2021, Jun 08). Retrieved from https://studymoose.com/importance-of-the-nile-river-essay 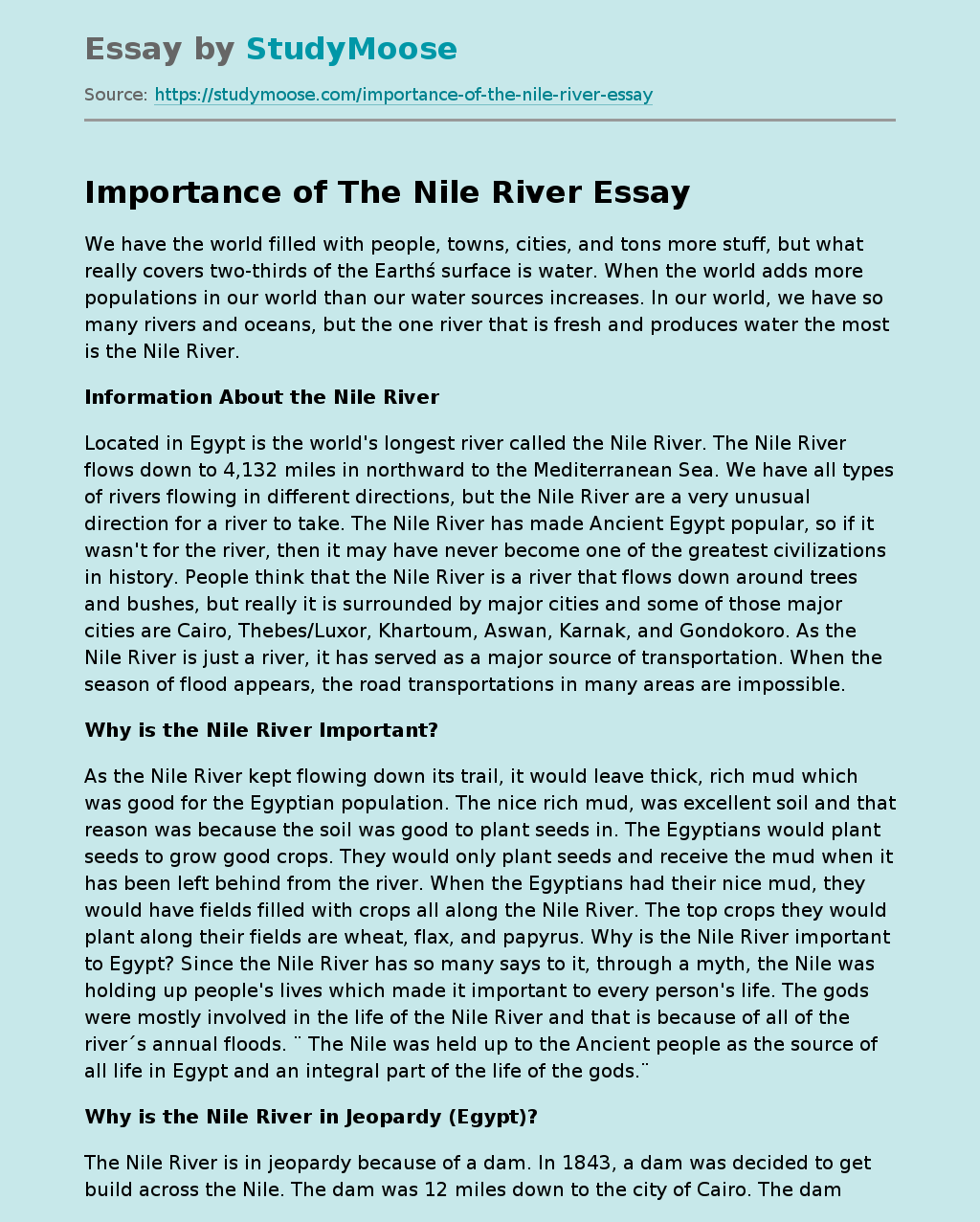