Importance of Being Earnest - Oscar Wilde

1. The absolute necessity of Earnest/John/Jack Worthing to account for one parent, of either sex, before he can marry Gwendolyn

2. As well as Gwendolyn’s requirement that his name be EARNEST.

3. Algy showing up at the country estate, and wooing Cecily.

The Importance of Being Earnest
TURNING POINT:
The arrival of Lady Bracknell at the country manor estate of Jack/John Worthing.
The Importance of Being Earnest
FALLING ACTION:
Everything between the arrival of Lady Bracknell at Jack/ John’s country estate and his discovery of who he really is.)
The Importance of Being Earnest
CLIMAX:
When he finds his father’s correct name in the military records of his day.
The Importance of Being Earnest
DENOUEMENT:
The pairing off of the three couples in the last few lines of the play.
“I never travel without my diary. One should always have something sensational to read on the train.”
Gwendolyn Fairfax
“To lose one parent, Mr. Worthing, may be regarded as a misfortune; to lose both looks like carelessness.”
Lady Bracknell
“This suspense is terrible. I hope it will last.”
Gwendolyn Fairfax
“Well, one must be serious about something, if one wants to have any amusement in life. I happen to be serious about Bunburying. What on earth you are serious about I haven’t got the remotest idea. About everything, I should fancy. You have such an absolutely trivial nature.”
Algernon Moncrieff
“True. In matters of grave importance, style, not sincerity, is the vital thing.”
Gwendolyn Fairfax
“If I am occasionally a little overdressed, I make up for it by being always immensely over-educated.”
Algernon Moncrieff
Cesar Hill
Share

Importance of Being Earnest - Oscar Wilde. (2017, Dec 08). Retrieved from https://studymoose.com/importance-of-being-earnest-oscar-wilde-essay 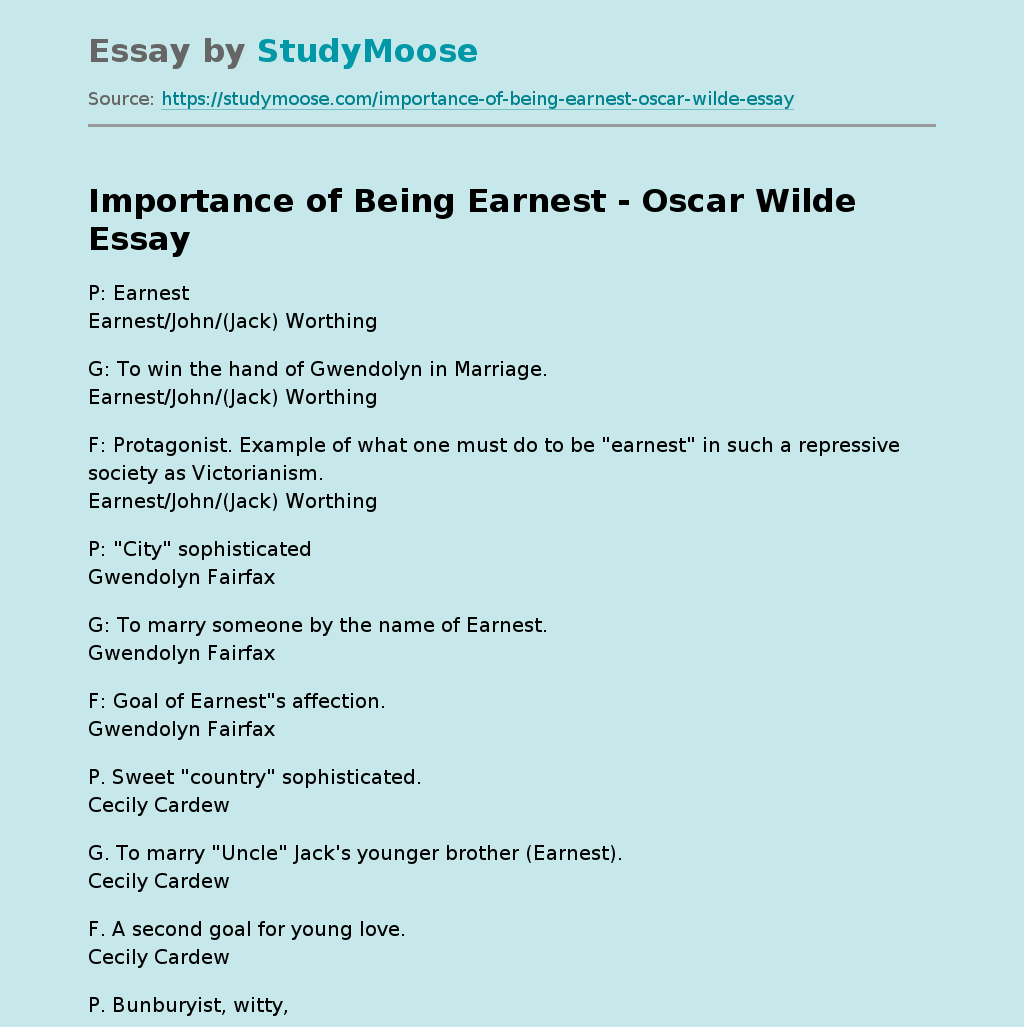