The impact of Elvis Presley upon the US society was huge. Everybody was talking about him, whether they were saying good or bad things. Elvis sold huge amounts of records, this is shown in source F, which shows that within a year of him signing a contract with a record producer, he had 4 singles in the top 5 singles of the year. This shows his meteoric rise to fame and his huge fan base, but most of all shows his amazing impact on America over that 1 year.

Don't use plagiarized sources. Get your custom essay on
“ The impact of Elvis Presley on the US society was more the result of TV coverage of his performances than of his music ”
Get custom paper
NEW! smart matching with writer

His concerts were always sold out and everywhere he went there were screaming, crying girls surrounding him, also, whenever he appeared on a TV show ratings soared, as source C says ‘(When Elvis appeared) The Milton Berle show topped Phil Silvers Sergeant Bilko in the ratings for the first time all season’. This shows that people wanted to see him and how popular he was.

But although Elvis had a lot of fans, there were a lot of people who didn’t like him or didn’t approve of him.

For example America was a very racist, anti-black country, but Elvis Presley’s style of music was of black origin, many older, more traditional Americans, did not approve of him, his music, or even the way he moved on stage, which was seen as highly sexual and distasteful, members of the Ku Klux Klan wanted to see him dead. In source Eii a quote is given from a member of the Ku Klux Klan ‘We’ve set up a twenty-man committee to do away with this cannibalistic, negro-loving rock and roller’ this shows the extent of their hatred towards him and his huge impact on the older people of America.

Now, almost 50 years later, people are still listening to Presley’s music, people still make journeys to his home Graceland, to look at his estate, new, popular artists are re-releasing his songs, for example JXL who remixed a ‘little less conversation’, this shows Elvis’s ability to live on, even after he died, and the huge impact he must have had upon the people of America at that time in order to still be spoken about, written about and his music listened to, almost 50 years on.

Elvis Presley’s impact on the US was partly due to his music. Elvis Presley’s music was unique, when he first began to release singles nobody had hear anything quite like what he was doing, so they put it under genres that it did not fit, for example, source A calls Presley an ‘amazing country warbler’.

Elvis may have been from the country, but he did not sing country music, and his uniqueness made him stick out and made his music more noticeable and recognisable, this made him very popular and this made a huge impact on America, as if he hadn’t been quite so unique, he would not have been as hugely popular and wouldn’t of made such a big impact. Another thing that shows Presley’s impact on America was his record sales, which were huge; he was very popular, especially among teenagers, this shows his impact was due to his music’s popularity.

Elvis Presley had a unique voice, according to many he was ‘a white man with a black mans voice’ this made a huge impact on the highly racist US, causing a stir among older, more traditional people who were still very racist and who did not think he should be allowed to perform. Elvis Presley’s impact on the US was also partly to do with his TV appearances, whenever Presley appeared on TV ratings soared, and everybody wanted him on their show, mainly teenagers, who adored Presley tuned into to see him perform. Without TV Presley would not of been recognised, or so well known.

A lot of his impact was due to the controversy he caused when appearing on TV, he moved very sexually and many older people disagreed with this, as source B shows people found him ‘vulgar’ and there was a very ‘heated reaction’ to his performance, although this was bad publicity Presley was still in the press and other media, he was being talked about and therefore everybody had heard about him. Teenagers were now beginning to rebel, and liked anything their parents didn’t, as their parents distaste for Presley grew, so did their love for him, this was all due to the TV, as if they hadn’t seen him they would have no problem with him.

A little later on in his career Presley was called up for national service. Throughout his time in the army he was continuously followed by cameras and was always on the TV. Now, older people began to see what a respectable Young man he was and their opinions changed, they now liked him. As he was always on the TV, he as always in the spotlight, and although he was not making music, people were still continuously talking about him. This suggests his impact was mostly due to TV. Many other things added to the impact of Elvis Presley.

One is the wealth of Post-war America. After the war finished, America became very rich and its teenagers, for the very first time, had a disposable income. They could spend their money on anything they liked, including records. Teenagers were the majority of Presley’s fans, and they all bought his music, continuously putting him at the number 1 spot on the American billboard charts. Presley was doing very well due to these record-buying teenagers, upping his impact on the US. Elvis also made films, which helped in his impact on the US.

His face was everywhere, on posters, on the screen, on TV, this kept him in the spotlight and increased his impact on the US. Overall I believe Television is the main cause of Presley’s magnificent impact on the US society, because, although he wouldn’t of appeared on TV unless he had released singles, Television was what made people recognise him. For some television was the only way the would ever see Elvis Presley perform. Elvis was constantly on the TV, so he was always in the spotlight making his impact huge.

The impact of Elvis Presley on the US society was more the result of TV coverage of his performances than of his music. (2020, Jun 02). Retrieved from https://studymoose.com/impact-elvis-presley-us-society-result-tv-coverage-performances-music-new-essay 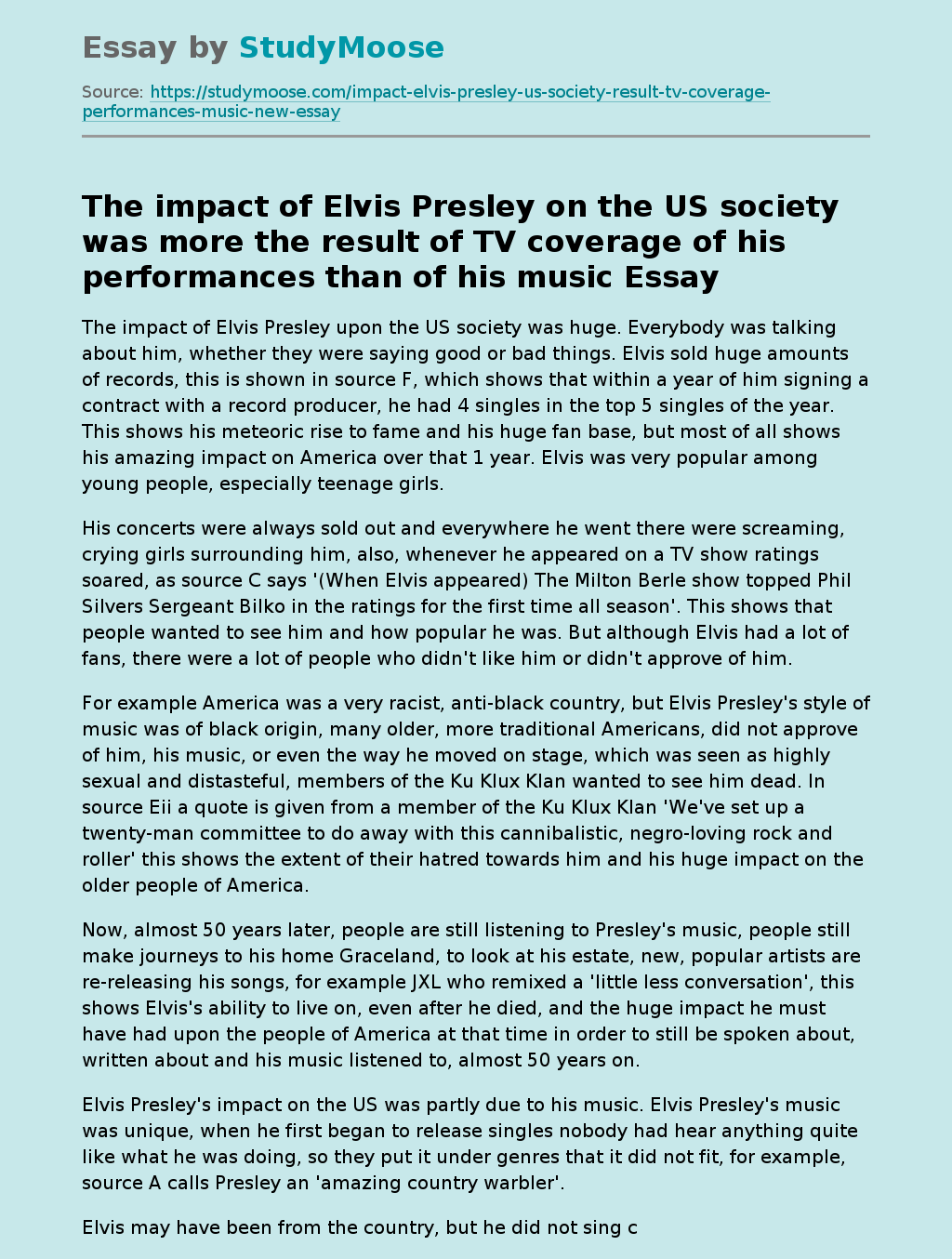