Image of Woman in As I Lay Dying

Throughout the ages, women have been affected negatively by our patriarchal society. Women tend to be cast off as subordinates compared to their male companions and have been expected to uphold a society that hasn’t upheld them. Women have been given a role and deviation from this has often lead to scrutiny, or in more severe cases physical abuse. However, limiting ourselves to these rules can take a damaging toll on our psyche, which in turn can cause resentment towards our female duties.

Don't use plagiarized sources. Get your custom essay on
“ Image of Woman in As I Lay Dying ”
Get custom paper
NEW! smart matching with writer

In William Faulkner’s As I Lay Dying, one of the main characters, Addie Bundren is a perfect example of a woman battered by her role in society and her desire for independence.

Though Addie dies early on in the story, her opinions resonate deeply throughout the book, and her story shows her internal struggle with her role as a mother. Addie’s disassociation from her family reflects resentment towards her role, and her relationship with her illegitimate child displays her pride in her moment of independence.

Addie Bundren is a good representation of an unwilling woman thrown into motherhood, love, and religion and throughout the story, Addie’s thought processes relay her inner conflict.

Addie’s role in motherhood is one of sadness and anger. Addie has a capitulated tone throughout her passage, like when she says, “I gave Anse the children. I did not ask for them. I didn’t even ask him for what he could’ve given me: not-Anse. That was my duty to Him'(174).

Addie correlates motherhood with fulfilling a duty, going on to explain that motherhood “was invented by someone who had to have a word for it because the ones that had children didn’t care whether there was a word for it or not”(172). Addie has a pessimistic view on her duties as a woman and throughout her life, she keeps her opinions private, knowing they could get her in trouble. Addie conflicts with her ideas on motherhood and how this hinders her independence and her loss of independence causes her to resent Anse and her family.

Rather than conforming to her lifestyle, she internally rebels and suffers mentally, causing both her and her children to suffer. Each one seems devoid of love and care and in Addie‘s final moments, they all seem preoccupied with personal issues rather than the wellness of their mother, Dewey Dell with her pregnancy, Cash with the building of the coffin, Vardaman went fishing, and Darl and Jewel weren’t even home. Addie’s skewed perspective on motherhood directly affects her children and emerges from her yearn for independence. Her desire for her individuality was smothered and this takes a toll on her mental health.

Addie’s attitude towards well-known terms used worldwide is a negative one. Addie mentions that when she was younger, her father would say, “the reason for leaving was to get ready to stay dead for a long time”(169). Which gives the readers an insight to Addie’s early influence on her thought processes. Addie’s father seems to have raised her to have a pessimistic point of view and this shows throughout the story. Addie’s views on love are negatively shown when she states, “I knew that that word [love] was like the others: just to shape to fill a lack”(172).

She seems unimpressed with the thought of love and does not “love” Anse, and her approach to love is one of disgust. She represents a mindset that understands the absurdity of words, especially ones with sentimental connotations. This opinion would have been a rather uncommon one in the 1930s, especially in a woman, whom are expected to be emotional and tender. The story is compiled of various points of view that seem to misinterpret and contradict one another and this could be a way for Addie to further exemplify her resentment towards language and it’s pointlessness. Addie believes words are meant to fill void in people’s mentalities and words like “love” encourage women into deserting their independence.

Addie’s ideas on religion are thwarted by “sin” and her self actualization. When Addie has an affair with Reverend Whitfield, Addie recounts Whitfield as “dressed in sin”(174) which ultimately leads her to distrust in religion, because a man of such religious stature could commit adultery. Addie’s self-actualization also plays a part when she thinks of her illegitimate child, Jewel. She believes Jewel to be her “salvation”(168) and that “He will save me from the water and from the fire”(168). She does not put her trust in God, which in this time and area, was highly frowned upon. Addie’s pride and urge for independence further deviates her from the norm but she doesn’t care and to her, Jewel represents her resistance to her forced mundanity. Addie lost faith in religion and has put her faith in her son, Jewel, a symbol of her defiance and her independence.

Addie Bundren is a symbol of patriarchal defiance and the modern-day woman. Though Addie’s views are extreme and quite negative, Faulkner does this to resonate her message. Women suffer under the pressures of society and Addie is externally submissive but internally at war with it. Addie’s war with her surroundings is blatant throughout the story and her resentment towards Anse is unwavering. Her ideals and actions are extreme but Faulkner does this to boldly identify what women are expected to be and how this negatively affects them. She also seems to have an overarching role over the story as assumed in the very title of the work itself, As I Lay Dying.

From a glance, Addie may seem like an insignificant character but at a closer look, her importance is irrefutable. She has an ubiquitous presence which further demonstrates Faulkner’s desire to bring forth his message of female suppression. Addie Bundren is an early symbol of feminism and her opinions and subconscious represent a greater idea on early equality between the sexes. Her opinions on motherhood, love, and religion set her apart from the traditional woman and her ideals set an example for all women to veer from the norms of a patriarchal society.

Image of Woman in As I Lay Dying. (2021, Dec 03). Retrieved from https://studymoose.com/image-of-woman-in-as-i-lay-dying-essay 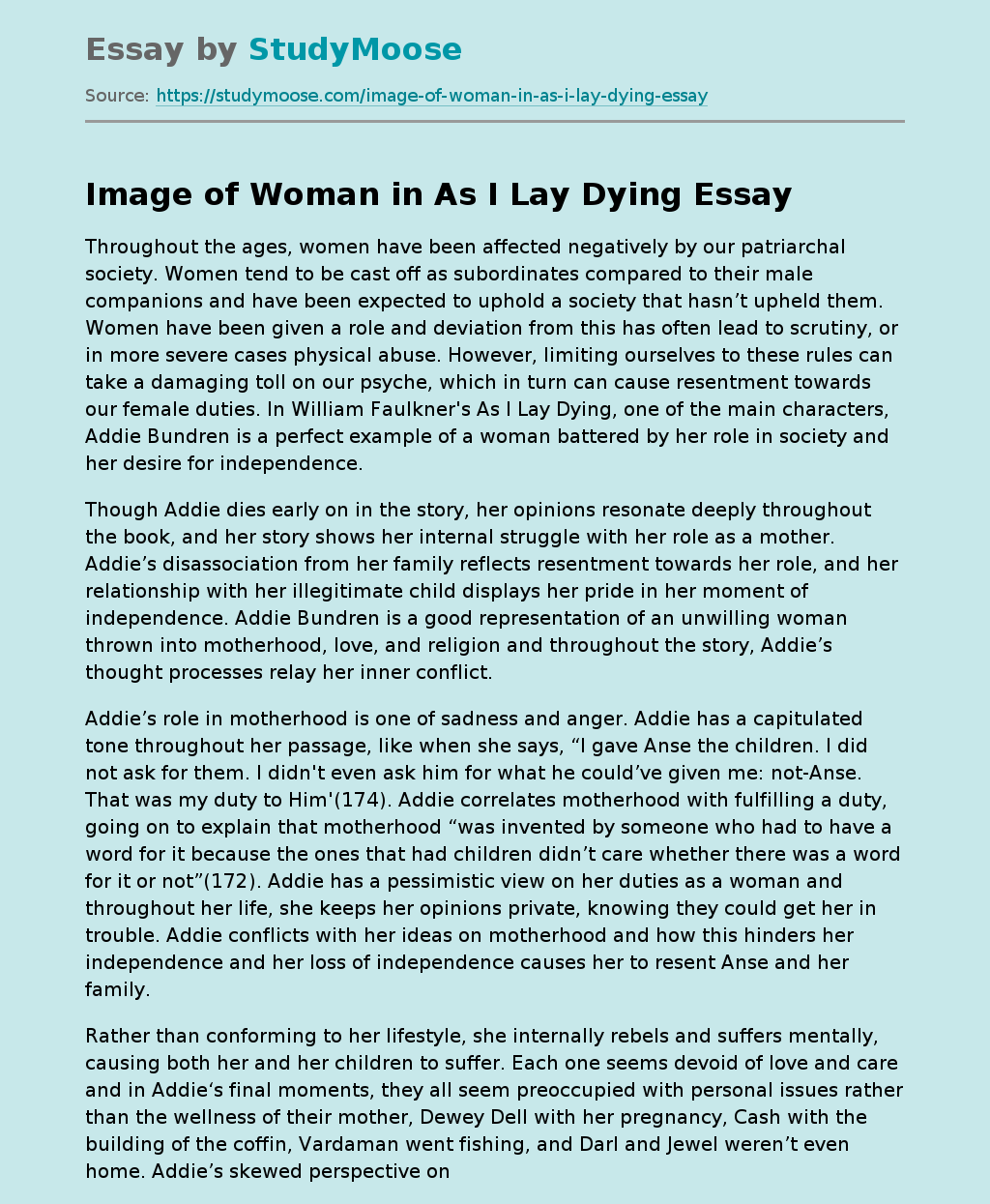