Image of Violence Used on Slaves in Literature

First, Frederick shows us how the slaves were treated as less than humans by their masters.

Don't use plagiarized sources. Get your custom essay on
“ Image of Violence Used on Slaves in Literature ”
Get custom paper
NEW! smart matching with writer

They would sell slaves to gain money. He also tells us how the women slaves were raped by their masters for profit. They gain profit from that by selling the child to strangers. Usually, the master sells his children because his white wife doesn’t like to see that he had children from another woman, a slave at that. The violence that they used on women was horrible. The first act of violence that Douglass has seen was on his aunt Hester.

It was a night that he would never forget and will always remember. In fact, he describes it the way he saw it saying “the louder she screamed, the harder he whipped; and where the blood ran fastest, there he whipped longest.” This shows that the master is so cruel that he would whip where it hurt the most.

He wouldn’t care if they were crying, screaming, or pleading. This goes back to the violence of women and how they had no mercy for anyone.

Another example of violence against women is when Mr. Hick’s wife killed a teenage girl. She was killed because she didn’t wake up when the baby of Mr. Hick started crying in the middle of the night. Mrs. Hick’s was mad about this, so she got wood from the fireplace and hit the girl until she died. The white woman wasn’t charged for killing someone because it’s normal for them to kill slaves.

Also, slaves were not given enough food, clothes, and rest. They would give them food, but it wouldn’t be enough. The clothes that they were given for a whole year consisted of two shirts, a pair of linen trousers, one jacket, one pair of trousers for winter, stockings, and one pair of shoes. The children were given two pair of shirts. If that wasn’t enough, then they would stay naked until the next time. They would make them work so hard, which gives them little time to rest. If they don’t wake up when they are woken, then they would get a whipping from their master. Another thing that Douglass mentioned so much is the killing of slaves. If a white person killed a slave, then they would justify themselves by saying that the slave did something wrong and that they deserved it.

An example of this is when Mr. Bondly killed an old man for trespassing. He went to Colonl Lloyd to justify what he did and pay for his “property” that he killed. There was nothing done about this and he wasn’t charged for murder or killing a slave. Another example is of Demby, who refused to be beaten or whipped by Mr. Gore. Demby went into the stream and wouldn’t come out. Mr. Gore gave him three calls and if he didn’t come out, he would shoot him. Demby refused and was killed. Again, Mr. Gore justified himself by saying that it was his job and wasn’t charged for killing a slave. In the book, Douglass said: “that killing a slave, or any colored person, in Talbot County, Maryland, is not treated as crime, either by the courts or the community.” Douglass tells us all these stories to prove his point that slaves are always getting killed for no reason.

In other words, slaves are treated unfairly by their masters. The amount of violence used on slaves was horrific. It shows that slavery was dehumanizing. They were treated as more of “properties” and “animals” than human beings. Also, it shows us how slaves always have to be wrong when it comes to talking with their masters. Slaves were very brave for handling all that pain and violence that was used against them.

Image of Violence Used on Slaves in Literature. (2021, Dec 07). Retrieved from http://studymoose.com/image-of-violence-used-on-slaves-in-literature-essay 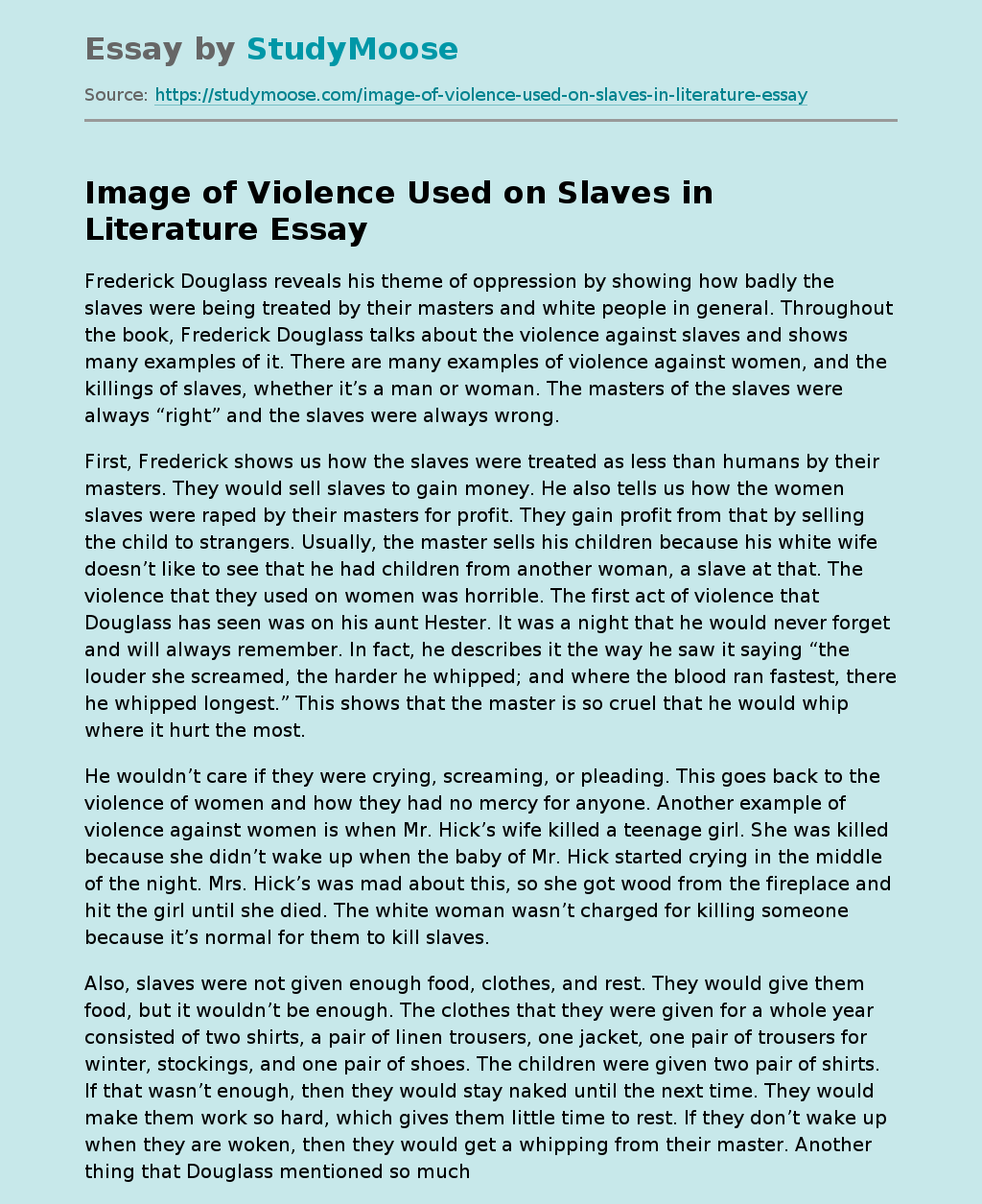