How resources are allocated

An economic system is the result of individuals (consumers and producers), groups (firms, trade unions, political parties, families etc) and the government coming together and interacting in a legal and social society. The function of an economic system is to resolve the basic economic problem – scarcity which means that the resources are limited but wants are infinite. This distribution has three dimensions:

* What is to be produced

* How is it to be produced

* For whom is it to be produced.

There are 2 economic systems which are commonly used world-wide.

Don't use plagiarized sources.
Get Your Custom Essay on How resources are allocated Just from $13,9/Page

In a free market economy:

*The factors of production are owned by private individuals or groups of individuals who own the resources. They then rent them out to the firms so that they can produce the goods and services.

*Firms can sell anything they want. They respond to the consumers who are allowed to by anything that is sold by the producers.

*The level of competition is very high. Firms are competing desperately for customers and the consumers are competing with each other for the goods on offer

How are resources allocated under a market mechanism?

What is to be produced?

In a pure free market, it is the consumer which determines the allocation of resources. Consumers are sovereign. Each consumer has a free choice on the amount of money to spend on goods and services. Firms with the money recieved, buy the factors of production needed to produce goods and sercives. In other words in a free market a firm will only produce what the consumers are prepared to buy.

The consumers are the ones to dicate the goods that should be produced. For example the public decides that they want to buy more product X than product Y. The increase in demand for product X will increase the price at first. The production of product X will increase since many new first will get attracted with the idea of profit and at the same time the level of competition will increase. On the other hand for product Y the demand will fall along with profits. In general there is a transfer of resources from one industry to another.

How will it be produced?

There is competition between the various firms. Consumers will buy from the producers which offer the lowest price. So producers must produce at lowest cost. This then determines how goods are produced. The firms will adpot the lowest cost technique of production hence resulting in productive efficiency and allocative efficiency

For whom will it be produced?

The amount of money the consumers spend is determined by their income. This affects the factors of production since those with high invomes will be able to consume more of the goods whlist those with low income can only buy few goods and services.

There are some advantages in a free market economy:

*There will be a much larger choice of goods and services

*Higher economic growth rates – Economic systems with a free market model have grown much faster than those with a command economy.

For example with the restaurant Mac Donald’s the demand is high because the consumers find it convenient to just drop by and have a meal within a matter of minutes, and since the consumers demand more the supply of it is also large.

A command economy has a very powerful government sector and the workets and consumers are subordinate. The resources are allocated through a planning mechanism. Some goods and services are prvided free and some rationed or sold

The characteristics of a command economy:

* Factors of prodction are owned publicly by the government

* There are no free enterprise

* There is very little competition which gives rise to black markets

* The government has the responsability of planning how all the resources should be used. The decide what should be produced and in what quantities. In other words they set the output and price levels.

What is to be produced?

The consumer does not have any control at all on what will be produced. The planners or the government decide what will be produced, but the main problem which arouses is that the government does not know what exactly the consumers need. In other words supply is dictated by a governing body which tries to predict demand however this process is very difficult and it leads to heavy losses.

How will it be produced?

There is no such thing as firms in a planned economy. The government direct the resources into producing “units” They have no autonomy, so basically the government decides the quantities of output and the methods of production

For whom will it be produced?

The government tries to distribute the output of the economy more fairly. Wages are determined by the planners and so are the prices of the goods produced. So the government is effectively determining how much each consumer can consume. They also believe that all consumers get equal amounts.

Advantages of a planned economy:

* The government will try to make sure that nobody falls through the safety net. It will be a fairer economy even though it is likely to be less successful overall.

For example in Russia the government decided to produce jeans at a large scale but people were importing levis jeans and were selling them for a much cheaper price. this meant that the government lost a lot of money since they predicted that the people needed jeans but in reality they did not and even though they lowered the prices there were still huge amounts of stock which was not sold.

Characteristics of a mixed economy:

* The market part of the economy will be motivated by self interest. First will maximise profit consumers will maximise their welfare and the factor owners will maximise rent interest and profit. The government on the other side has the common good goal.

* The level of competition will vary on the degree of mix. and it will depnd on the market structure.

* The price mechanism operates in the private sector. its efficiency depends on how competitive the market structures are. The government run activities.

Many countries or economic systems have attempted to solve the resource allocation problem by reaching a compromise between the free market and planned economy systems. For example a governing body may decide that the production possibility frontier (ppf) has potential to increase if education and health services are provded to the public and thus enforces this, thus supplying it for free – this must be paid for by taxes which encourage a planned economy approach. However the remainder of the economy follows a free-market model

The government needs to decide the perfect balance between these two factors. If people are healthier then they are more educated and the more educated the healthier. This means that they firms will be able to have better qualified workers. This in turn will mean that the taxes will increase and the government will get more money. This money can be invested into improvements in technology and resulting in an increase in the ppf. For example the UK offers free NHS this means that more money can be spent on education and train people and this can lead to an improvement in techonology. On the other hand the better the education means that people are better qualified and more people can become doctors and thus it will improve health services.

Though there are 3 main types of economic systems which sue three different methods of resource allocation, there is often, in developed countries a tendency to use mixed economic methods in which both aspects of the free market and the planned economy are present. In developing countries there are approaches to the problem of resource allocation using all 3 methods.

How resources are allocated. (2016, Jul 22). Retrieved from https://studymoose.com/how-resources-are-allocated-essay 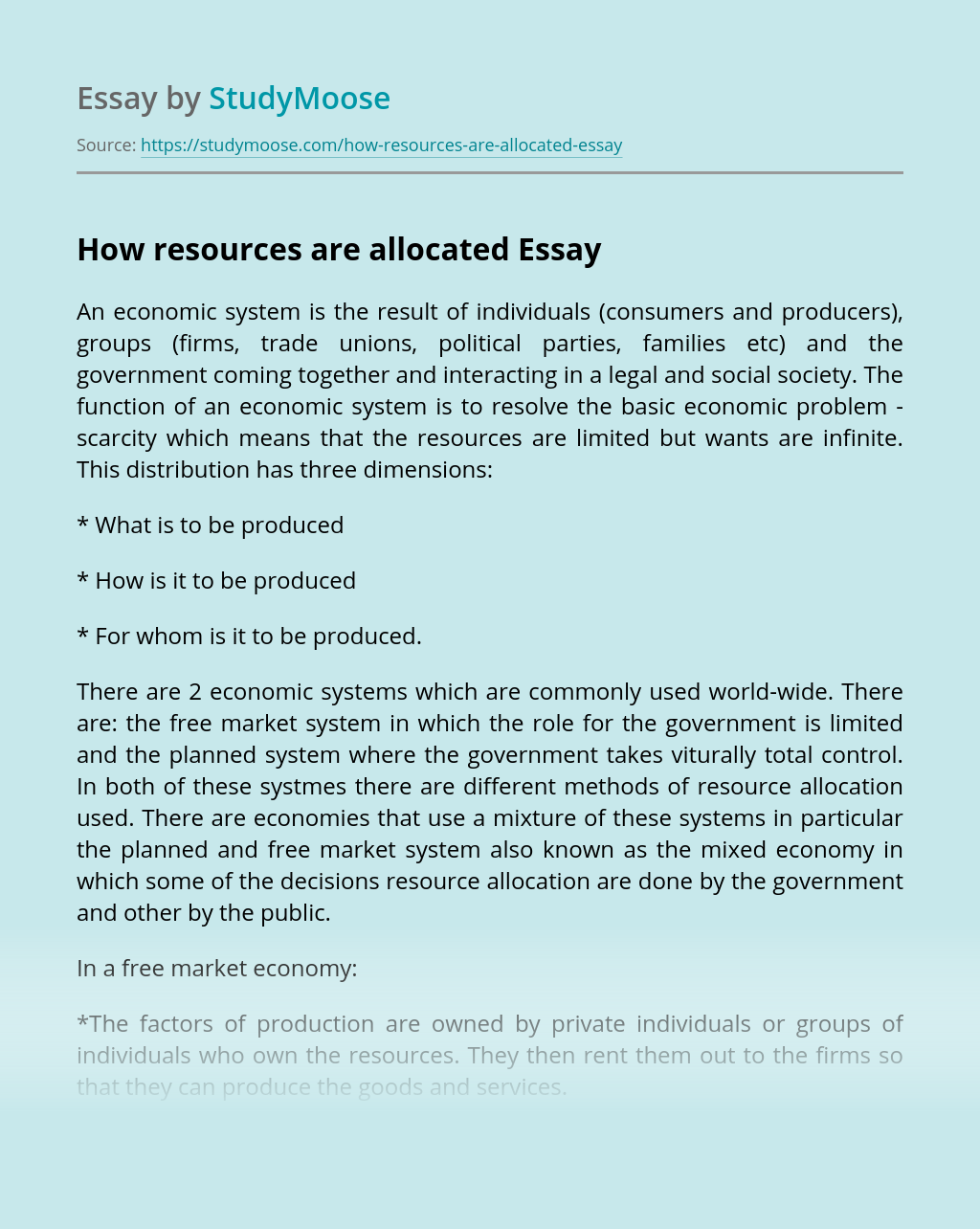 Globalization is a necessary evil that allows business to make huge profits and third-world countries to begin creating a free market economy. While it seems that globalization may be a solution to the problem of poverty and starvation for some people, it may also contribute to issues such as child labor, discrimination, exploitation and health...

The study of Law without the knowledge of other related social sciences i.e., Political theory, Sociology and Economics, etc, is incomplete. In any law curriculum the study of Economics and Law and their interaction is increasingly found necessary. As Law influence Economics, Economics also influence Law. As a matter of fact Economics forms the basis...

View sample
Get Essay
Globalization in the 21st Century

Globalization has become one of the principal symbols of economic, cultural and political life in the 21st century. Although there is no precise definition of globalization, due to the complexity of the term and the varying attitudes towards it, put simply it is the process by which nationality is becoming all the time more irrelevant....

View sample
What is the purpose of economic theory?

An economic theory can be expressed as the ideas and principles that aims to describe how economies operate taking into account elements of micro and macroeconomics (Cambridge University Press, 2013; LNPU, 2010). On one hand, microeconomics pertains to how supply and demand functions in individual markets and consumer behaviour. In contrast, macroeconomics is the study...

The Invisible hand is a term created by the renowned economist Adam Smith in his popular book The Wealth of Nations. It means that when individual’s pursue their own self-interest they are led by an invisible hand that promotes the society’s interest more than what they intended. It is an important property of a competitive...