They were established back in 1876 when Alex Graham Bell first invented telephone. Together with the group of AT&T subsidiaries, they have over 105 million subscribers in 225 countries and close to 250,000 employees worldwide (AT&T, 2014). According to the (Plunket Research, 2013), the market value worldwide for telecommunication industry in 2013 was USD 5 trillion and the market value for United States alone was USD 1.2 trillion. Technology has been an integral part of our daily life; and it is widely used in all business organizations.

91% of adults in United States owned a cell phone (Pew Research, 2013) and the telecommunication industry may seems to be an attractive industry with the increase demand of such product and services. However, due to the rapidly technological evolution, this is a highly competitive market to sustain competiveness in the market.

For example, AT&T’s business evolves around technologies, there is shift of demand in the consumer market; consumers have switch to use instant messaging services like ‘whatapps’ instead of talking over the phone or short messaging services.

AT&T must be able to implement alternate strategies to meet customers’ need before competitors. Though there are four major players in the telecommunication industry, AT&T’s main competitor is Verizon; they have similar financial strength and market share while Sprint and T-mobile hold a very small percentage of the market share. When firm resources in an industry are homogenous, competitive advantages cannot exist (Bain, 1956). To continue as the market leader, AT&T needs to have sustainable competitive advantages against competitors. According to Barney (1991), a firm is said to have a competitive advantage when it is implementing a value creating strategy not simultaneously being implemented by any current or potential competitors. And to sustainable competitive advantages firms have to analyze their internal environment and implement strategies that will exploit their strengths by exploring the external opportunities while neutralizing external threats and avoid internal weakness. Porter (2005) reinstates that firms will attain competitive advantage by developing a strategy that enable them to have a unique marketing position. Kanter (1999) also argue that to sustain competitiveness in the market, firm must innovate in an accelerating rate.

Resources and Capabilities Leading AT&T the Market Leader
The resource-based view (RBV) strategy analyzes a firm’s internal resources that may potentially be the key resources that can have a competitive advantage. And in order to sustain a competitive advantage, a firm must have unique resources (Barney, 2004). RBV strategy is used to evaluate the internal capabilities on an organization – resources and competences (Barney, 2001). Resources are productive assets owned by the firm; capabilities are what the firm can do (Grant and Jordon, 2012). By applying Barney’s (1991) VRIN framework, we can determine whether the internal resources will contribute to the firm’s strategic capability. They four key attributes of the VRIN framework are: (1) Valuable; exploits competitive opportunities (2) Rare; they must be rare in the competitive environment (3) In-imitable; competitors cannot duplicate the sources (4) Non-substitutable; must not be easily replaceable by alternate products. The key resources AT&T possesses are the strong financial resources, extensive network infrastructure, research and development facilities, human resources, unique culture, brand image and intellectual properties.

Resources are then classified into tangible assets or intangible assets and they must be heterogeneous and immobile to have sustainable competitive advantages. For AT&T to achieve strategic capability, we need to evaluate AT&T internal resources and their capability to perform well with those resources. Just resources alone or capability alone will not lead to strategic capability. Over the decades, AT&T has built different network platform worldwide to support a range of wireless voice and data capabilities. They have the widest network coverage, with more than 18,000 WiFi hotspots in 42 countries. In the United States, AT&T’s customers can access to free WiFi services at many popular hangout places like Starbucks, Borders and McDonalds. AT&T is also financially strong to invest of their network infrastructure. They have invested billions of dollars to install fiber optic cable nationwide to provide customer a much faster and stable network connection. Lieberman and Montgonmery’s (1998) first-mover theory state that firm may have competitive advantages through new innovations. AT&T was the first to introduce 4G networks in the nation and they are the first and only company who has the resources and capability to restore the network issue in the event of natural disaster.

They have built their reputation and brand in the industry over the years and are known as a technology leader with new innovations. Being the first-mover, AT&T has built customers’ confidence by being perceived as the industry leader who can deliver additional values to consumers thus reduce rivalry competition. For example, AT&T was certified by Department of Homeland Security for their Network Disaster Recovery program and US Navy awarded them a 10.4 million contract for the cloud-based voice-over IP recently. Financial and network infrastructure are key tangible assets to AT&T, they are extremely valuable to AT&T as these primary resources integrating with their intangible assets to achieve competitive advantage. Physical resources as such may confer little advantage to company for long term. For example, rival like Verizon, who has the similar financial capabilities may soon acquire similar assets. Verizon has already starting building the 4G networks. Acquisitions and mergers are often strategies in big firm. Strong financial resources give AT&T the capability to acquire other companies to strengthen their portfolio by leveraging on external capabilities. AT&T has announced to acquire DirecTV, the biggest cable television provider to strengthen their portfolio.

Though AT&T provides cable television services, they have less than 6 million subscriber in their ‘U-Verse’ bundle package, which include Internet, landlines and cable TV. The merger of DirecTV increase AT&T’s cable television subscriber four time more than their U-Verse and an additional 18 million cable television subscriber in South America (Forbes, 2014) by leveraging on the DirecTV’s existing network infrastructure and customer data based. There are high risks in every merger, many firms failed because company are unable to integrate. I believed that AT&T will successfully integrate these businesses together and will be able to deliver additional value to the customer by providing an integrated solution and extend to more subscribers. Unlike tangible assets, intangible assets like human resource, branding, intellectual properties, research and developments do not have a financial value and often the intangible assets are undervalued and yet contribute much more than the tangible assets. AT&T is the most valuable brand in Texas, with a value of 45 billion (Jean, 2014). Through various strategies, they have built a great reputation and brand recognition in the United States over the century. AT&T has the exclusivity distribution of Iphone when Apple first launched them in the market. AT&T has the upper hand in terms of business negotiation and bargaining power of suppliers are low due to the AT&T’s extensive customer base and their brand.

Porter (2005) argues that differentiation strategies give the firm competitive advantages against rivals. Being unique and different will also lead to higher profitability by demanding higher price. AT&T differentiates them from rivalry by highly focusing on research, development and customer-centric approach. AT&T has invested heavily in their research and development lab and they have 1300 of the world’s best scientist and engineers. AT&T’s researcher has contributed to the industry with many new inventions since 1901 and they made major technological inventions like communication satellite and solar cell that changes the way technologies work. According to Barney (1999) ‘A firm obtains valuable and rare resources because of its unique path through history, it will be able to exploit these resources in implementing value-creating strategies that cannot be duplicate by others’ and ‘A firm with scientists who are uniquely positioned to create or exploit a significant science breakthrough may obtain an imperfectly imitable resource from the history-dependent nature of these scientist’s individual human capital’. Since AT&T is a network company, research and development will be one of the most valuable resources to the firm.

Besides new innovations, understanding customers’ need is equally important. Some other key development focus includes increase process automation and consolidation, improve and enhance customer experience. Ability to deliver new technology and offer alternate products and services that better suit the customer needs is the key strategy to stay ahead of competitors. AT&T is rated as the company with the best customer service experience in the industry and AT&T’s customers are the first in the industry to have e-commerce services; they are able to view their bills online and also have added features like bill sorting by categories, request service updates and many more. Intangible assets like intellectual property, trademarks, copyrights and patents do not have an asset value, but they extremely valuable, rare, in-imitable and non-substitutable. Having heavily invested in research and development, these patents give AT&T the exclusive right to protect their innovations. AT&T has more than 5,000 registered patents and trademarks; they have 3 patents registered averagely per day. Grant (2005) describes human resource as the productive services offered to the firms by human being through their skills, knowledge, reasoning and decision-making abilities. Besides the scientist and engineers in the AT&T Lab, AT&T has employees from a diversify background that has different potential to contribute to the organization in different business function. Continue training and education will ensure that employees will have the essential knowledge, and the capability to perform their jobs.

There are a variety of training programs specially designed for the employees of all level and functions. For example, AT&T University provides leadership training to managers at different level, skills development program design from retail sales to engineers. In 2012, AT&T spent 250 million dollars for employees’ training and development and 28 million for tuition reimbursement to increase the employees’ knowledge and skills, which can in return transform into the human resource capabilities. It is very difficult to find a right candidate for the right position and it is even harder to retain talent in an organization. AT&T has one of the best compensation packages to retain talent, to increase employees’ loyalty and decrease employee turnover rate. Barney (2005) recognized that a firm’s culture is one of the most valuable resources. Culture is the work routines and how organization operates; every organization has their own mission, vision, strategies, values, beliefs and behavior. AT&T has a unique culture, they are highly focus in technology, leadership innovation, customer-centric focus, possess high integrity and believe in collaborative teamwork. Embedded capabilities are very likely part of the organization culture and AT&T’s unique culture contributes to the strategic capabilities on the firm. Both human resource and company culture are valuable resources, rare, in-imitable, and non-substitutable.

Conclusion
A&T is a differentiation leadership, who has superior customer service with the most reliable and fastest services; customers are willing to pay a premium price for the best provider. Their core competencies are: ability to scale the business, creation of new innovations ahead of competitors, integration of network components, integration of software components and network integration. AT&T has sustainable competitive advantages in the telecommunication industry because they possess inimitable strategic capabilities through complexity of internal and external linkage, with their achievements and past experience in the telecommunication industry, they are able to innovate and stay ahead of competitors. The organization has accumulated knowledge through both formal system and shared experience of people and they are able to integrate into organization capabilities. Due to the complexity of the resources, another firm will able to achieve sustainable competitive advantages with the same kind of resources. For example, Continental Lite tried to imitate Southwest’s budget airline, they failed and suffered heavy losses. Similar, even if Verizon have some of AT&T’s employees like the engineers, senior management, and including the same network infrastructure, Verizon will not have able to achieve competitive advantages as AT&T because they do not know the linkage of all the core competencies which will lead to failure. 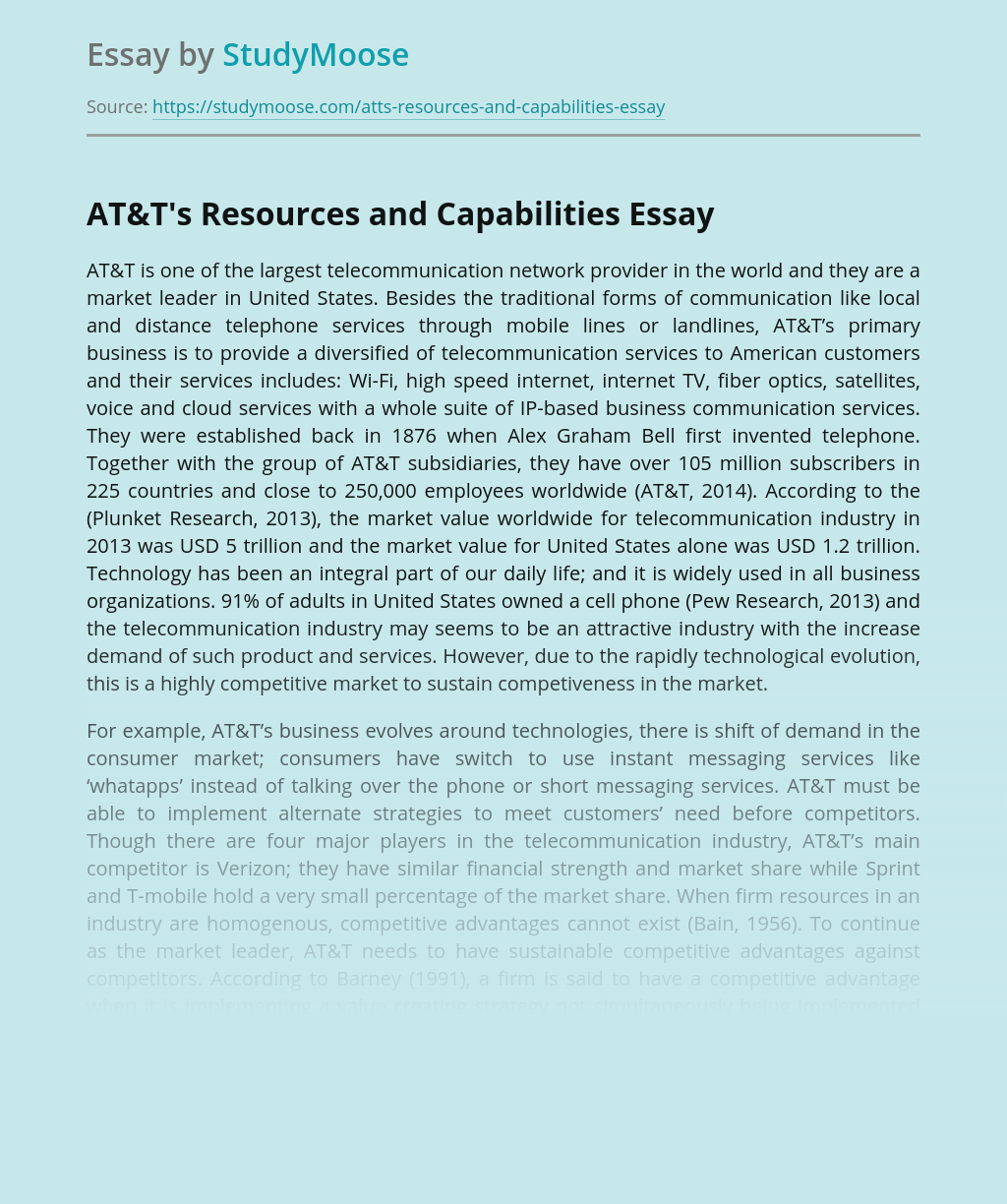 Don’t waste time
Get a verified writer to help you with AT&T’s Resources and Capabilities
Hire verified writer
$35.80 for a 2-page paper
Stay Safe, Stay Original