How Do Infections Occur?

Diseases can be classified as genetic, metabolic, or infectious. Infectious diseases are caused by bacteria, viruses, fungi and parasites that use our body as a host for reproduction and cause illness. Bacteria, viruses, fungi and parasites. These are all microorganisms which cause infection, yet they are all different in structure, required environment and conditions needed to thrive and multiply. Bacteria is a single celled organism. It’s shape and size can vary greatly from one type of bacteria to another, but its general structure is that of a simple cellular one with a nucleus that lacks a membrane.

Don't use plagiarized sources. Get your custom essay on
“ How Do Infections Occur? ”
Get custom paper
NEW! smart matching with writer

They can thrive in almost any environment and can be found within almost any substance/surface, also within the human body. However, it is thought that only about 7% of all bacteria is actually harmful and cause diseases. These are called “pathogenic” bacteria. Pathogenic bacteria cause illness as they rapidly reproduce and produce a toxin that kills or mutilates cells. Bacteria is self sufficient, meaning that it does not rely upon other organisms to survive.

Antibiotics, like penicillin, are substances that are toxic to the bacteria, but relatively harmless to people.

They have been very useful in combating disease, but their increased use has produced antibiotic-resistant bacteria, which is now largely recognised as an area of concern in the health profession. One bacteria, MRSA, is responsible for many serious infections that are sometimes fatal. Bacterias which cause common illnesses includes E. Coli, which causes diarrhea, abdominal pain, and even kidney failure, Salmonella, a frequent cause of food poisoning, Vibrio cholerae, which causes cholera, and Mycobacterium tuberculosis, which is the cause of tuberculosis (TB).

Viruses are pieces of nucleic acid (DNA or RNA) surrounded by a thin coat of protein that can only replicate within the walls of another living cell. They are smaller than bacteria, but are not a cell or living. Viruses replicate by invading another cell that acts as a host, replicating within these cell walls, until eventually the cell dies and multiple copies of this virus is released. They then go on to invade more body cells. The human body sometimes is able to build antibodies that prevent the replication of the virus to stop the infection. Vaccines consist f weakened viruses that stimulate the body’s defenses to fight infection by the natural viruses. Common illnesses caused by viruses include the common cold (caused by a rhinovirus), Influenza, and AIDS (which is caused by the virus HIV) Fungi can include single celled yeasts which are slightly bigger than bacteria, as well as multi-celled organisms such as mushrooms and molds. However, they do not have chlorophyll to make their own food like plant do, so they get their nutrition by acting as parasites or by breaking down remains of dead plants or animals.

Some fungi are poisonous, but some are beneficial. For example, one type of fungi is the source of Penicillin, and others are essential in the making of food products. Fungal diseases are called mycoses. These include Aspergillosis (infection of sinuses and lungs), Coccidioidomycosis (may cause cough, chest pain and shortness of breath), and Blastomycosis (skin and pulmonary infections). Parasites may be protozoa, but can also be fungal or multi-cellular organisms. Protozoa is a single celled organism which has a more complex cell structure than bacteria.

Some protozoa are able to surround themselves with a type of cyst, which enables them to live outside of a host for a long time, but generally a parasite needs a host in order to feed. Some diseases caused by protozoans are Malaria (transmitted by mosquitoes), and amoebic dysentery (an infection of the intestine caused by Entamoeba histolytica). Multicellular parasites include various types of worm and fungi that can cause a variety of common diseases including tapeworm, ringworm and athlete’s foot. Infection and colonisation. Infection and colonisation are two different things.

Infection is when a pathogenic microorganism invades a bodily part or tissue, subsequently producing tissue injury and progressing onto a certain disease through cellular or toxic mechanisms. Colonisation is the presence of these pathogenic microorganisms on a bodily surface of an individual such as the skin, mouth or intestines – demonstrated by a positive culture – without causing tissue injury and disease in the individual. The individual may have no signs or symptoms of infection , however they will still have the potential to infect others. Localised infection and Systemic infection.

A localised infection generally means that it is restricted to one area in particular. For example, an infected cut or an ulcer. These types of infections are the easiest to treat, as treatment only needs to be concentrated to one area in particular. A systemic infection, however, means that it has spread from this localised infection throughout the entire body, within the bloodstream like septicemia, or the lymphatic system. Once within these systems, the infection has the ability to damage other areas of the body and organs. Poor practice and Infection. Poor practice may lead to the spread of infection.

For instance, the use of PPE is required in practice as it protects against infectious materials by preventing contact with these materials by creating a barrier between this material and the healthcare worker. Not wearing this PPE within practice can be hazardous to both the healthcare worker and to those who rely upon their care. Hand hygiene is also extremely important to reducing the risk of spreading infection. Hand hygiene means both the washing of hands with hot water and soap and also the use of alcohol rubs. If hand hygiene is not done in the correct way, the chances of spreading infection increases.

The cleaning of an individuals surrounding is important, so if this is not done prior to and after each patient, infection can easily spread from these surfaces to the patient. There are many areas of poor practice which can lead to the spread of infection, so it is important to work to all policies and procedures within the workplace as these will help to reduce this risk of spread. Conditions needed for the growth of microorganisms. There are both physical conditions and chemical conditions needed for microorganisms to grow. Physical conditions include temperature, acidity or alkalinity.

Different microorganisms need different temperatures and different levels of pH. Chemical conditions include water supply, minerals, oxygen, carbon dioxide, and phosphorous, the level of each can have an effect on the thriving of the microorganisms and the rate of replication. The transmission of Infection. There are 3 different ways in which an infective agent might enter the body. The first is the digestive tract, where the ingestion of infected food and water causes infection. The second is the respiratory tract, where infection is inhaled from the surrounding environment.

And the last is the skin and mucous membranes, where a break in the skin or wound contamination, as well as animal or insect bites, can lead to infection. Also, infection can be transmitted through the mucous membranes, especially in sexual activity. Common sources of infection include things such as contact with an infected individual, contact with or ingestion of contaminated water or food, medical instruments that may not have been suitably sterilised, infection spread throughout air-conditioning, or contact with objects or surfaces contaminated by infection such as chairs or door knobs.

These may be either mechanical, where they pick up the infection on the outside of their body and pass it on in a passive manner, such as a housefly landing on faeces and then food, therefore contaminating it with bacteria, or biological, where they harbour pathogens within their body and deliver them to new hosts in an active manner, such as an insect bite. This is how malaria is transmitted. Vectors are usually required in the life cycle of a pathogen. A common strategy used to control vector borne infectious diseases is to interrupt the life cycle of a pathogen by killing the vector, and therefore stopping transmission.

How Do Infections Occur?. (2018, Oct 15). Retrieved from https://studymoose.com/how-do-infections-occur-essay 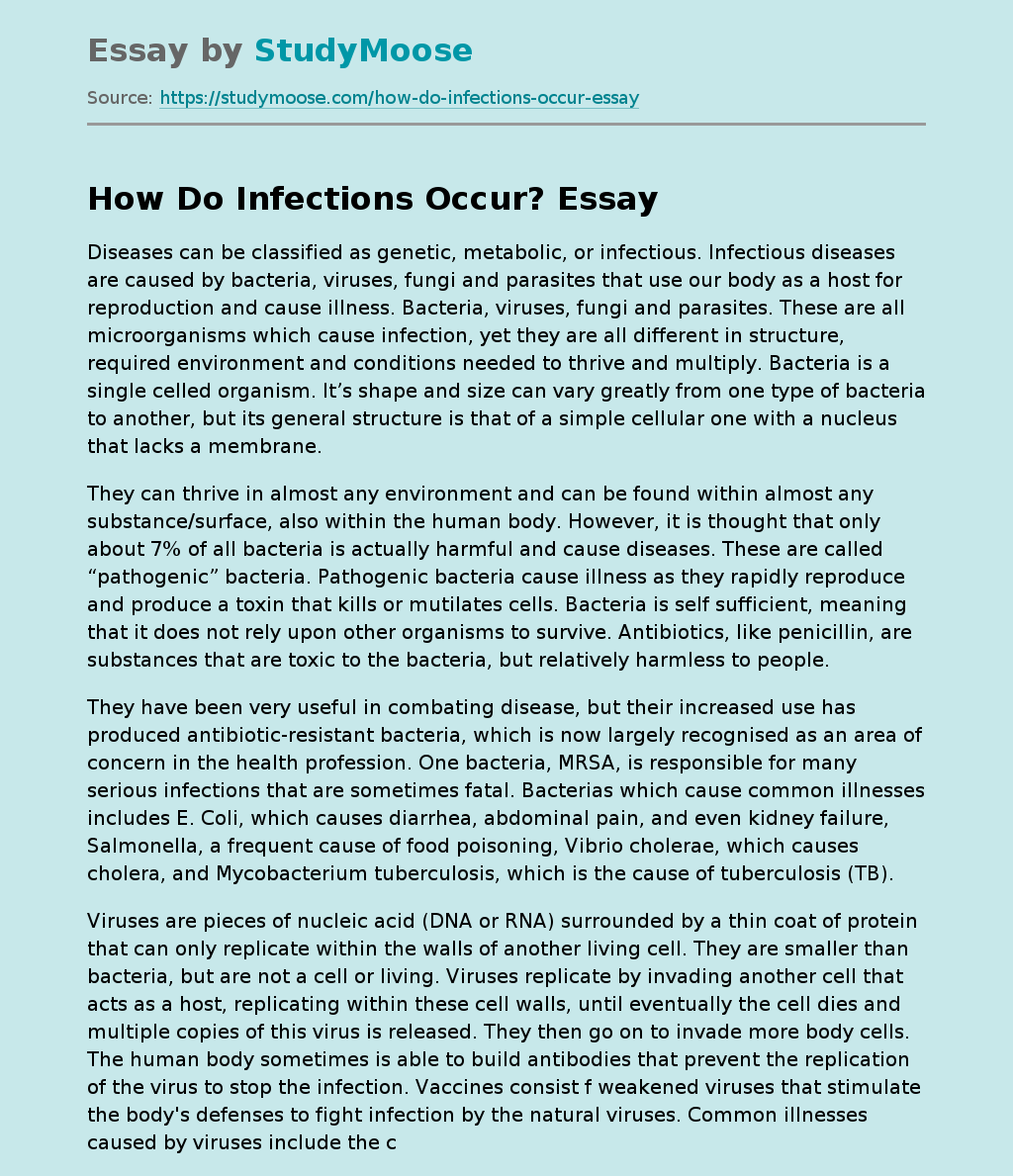