How cellphones changed our lives Essay

Cell Phones: How They Changed Our Lives Mobile phones have come a long way in the last seventy years, so be thankful yours fits in your pocket. Maybe one day it will even be able to bend like a piece of thin plastic. Maybe you won’t even have to touch it, doing all of your multitasking from cellular implants. But seventy years ago, you had been lugging a 25-pound ‘portable’ phone on your back, with very limited 5-mile range. And now, a visual history marking the accomplishments of mobile phones, from military applications to mobile apps.

Don't use plagiarized sources.
Get Your Custom Essay on How cellphones changed our lives Just from $13,9/Page

Forty years ago today, Motorola engineer Martin Cooper — credited as the inventor of the cell phone — made the world’s first public call from a mobile phone, choosing to get in touch with his rival in the race to create the device. Cooper made the call on a New York City street in front of reporters from a device weighing about 1½ kilograms.

Motorola spent almost $1 million producing the phone, Cooper later told the BBC. Since then, cell phones have been rapidly evolving into the high-tech multitasking devices we use today. Here is a look at some of the most famous developments in mobile phone history. First commercial cell phone:

A decade after Cooper made that first call, the U.S. Federal Communications Commission approved Motorola’s DynaTAC phone for public use. In 1984, the first DynaTACs became available for consumers. The handheld device weighed 0.8 kilograms and its rechargeable battery was reported to last about eight hours, according to a company information sheet from the 1970s. Pressing an “off-hook” button — so-called to symbolize picking up a standard telephone from its base — would start a phone call, while pressing an “on-hook” button would end the conversation. The original Smartphone:

In 1993, Bellsouth and IBM announced their creation of the Simon personal communicator phone, touted as the world’s first smart phone. Simon was designed to be a cell phone first and a computer second, according to the product’s media release.

The device, with an $899 suggested price tag, boasted features such as: A pager, E-mail, a stylus for writing on the screen, with handwriting reflected as-is for faxes, a complete keypad featuring letters and numbers, a calendar that could be updated automatically from a remote computer. Cell phone cameras:

In 2002, the first phones with built-in cameras became publicly available, including the Nokia 7650 and the Sanyo SPC-5300. The Nokia phone boasted “a large 176×208 pixel colour display,” according to a media release at the time. The Sanyo version offered three user-controlled tones, white balance and zoom. BlackBerry’s first integrated phone:

In January 2007, Apple launched its first iPhone. The company described the phone as combining three products into one handheld device: a mobile phone, an iPod and a wireless communication device. Other new functions included a visual voicemail box, touchpad keyboard, a photo library that could be linked to a remote computer and an almost nine-centimetre display for watching movies and television.

WHAT WE DO WITH OUR PHONES
With smart phones in hands one can look for restaurants, buy concert tickets, stay connected through Facebook, Twitter, and Instagram as we love to see what our friends are up to and look at their pictures. We also enjoy the diverse combination of news articles, humour, and lifestyle pieces that these various platforms provide. “A Eurobarometer survey of almost 1,000 children in 29 countries found most had telephones after age 9. -New York
Times “Three objects were considered essential across all participants, cultures and genders: keys, money and mobile phone.” -Nokia trend-spotter Jan Chipchase We use the weather app on a daily basis to see what we are going to wear, or even just to plan our day.”We use the maps to move around the city. If there is ever a moment we feel a need to capture, we once again can use our mobile phone, for taking photos and recording videos.

ITS NEGATIVE IMPACT ON PEOPLE
Researchers in Ohio have found that frequent use of cell phones by college students is tied to poorer academic performance, anxiety and unhappiness. This is according to a study published in the journal Computers in Human Behaviour. The researchers, from the College of Education, Health and Human Services at Kent State University in Ohio, describe how they surveyed more than 500 college students about their cell phone use and compared their responses with their college grades and results of clinical tests they undertook for anxiety and life satisfaction or happiness. Their analysis showed that cell phone use was negatively linked to GPA – the higher the cell phone use, the poorer the grades – and positively linked to anxiety – higher cell phone use was linked to higher anxiety. They also found, perhaps unsurprisingly, that higher GPAs tended to correlate with more happiness, while more anxiety was linked to less happiness.

Anxiety and happiness were assessed with two well-known questionnaires for assessing mental health: the Beck’s Anxiety Inventory and the Satisfaction with Life (SWL) index. The pervasive use of cell phones impacts many people–both cell phone users and bystanders exposed to conversations. This study examined the effects of overhearing a one-sided (cell phone) conversation versus a two-sided conversation on attention and memory. Cell phone conversations may be a common source of distraction causing negative consequences in workplace environments and other public places. Earlier this year, a team led by Lepp and Barkley also identified a negative relationship between cell phone use and cardio respiratory fitness. Smart phones also affect our relationships as my friend quoted: “At times, I have even experienced this with friends. They will be doing some activity with you, and constantly checking their phone every five minutes. Not only does this make you feel worthless and unimportant, but it also conveys that this person has nothing substantial to say or add to the conversation.”

CONCLUSION
Today, smart phones are central to college students’ lives, keeping them constantly connected with friends, family and the Internet. Students’ cell phones are rarely out of reach whether the setting is a college classroom, library, recreational centre and cafeteria or dorm room. As cell phone use continues to increase, it is worth considering whether use of the device is related to measurable outcomes important for student success, such as academic performance, anxiety and happiness. But students should be encouraged to monitor their cell phone use and reflect upon it critically so that it is not detrimental to their academic performance, mental and physical health, and overall well-being or happiness.

How cellphones changed our lives. (2016, May 07). Retrieved from https://studymoose.com/how-cellphones-changed-our-lives-essay 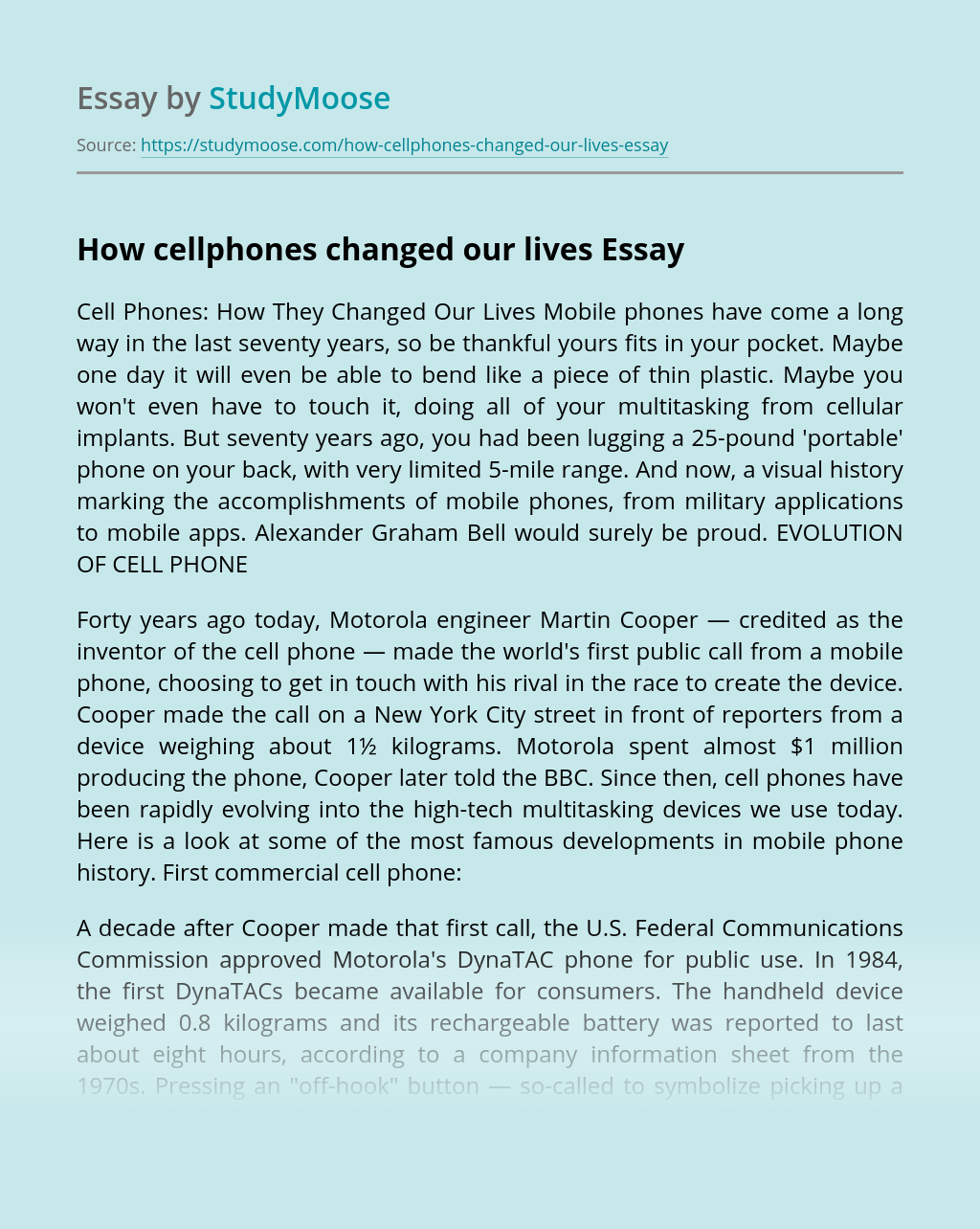 1) Identified Need:  a) The training program is a response to a felt need within Avatal Salon. Because the receptionists and the business as a whole feel that the operations at Avatal need to improve in order to meet the needs of our clientele, the business needs to reestablish proper training and operation methods. The... VIEW ESSAY

Identity is presented through the contents of belonging, values and beliefs. A person’s identity constantly changes and develops in time, depending on aspects of ethnicity, self-image and connection to a person or place. It is this which “builds” the qualities of identity. Prime examples of expressing the intricate nature of identity is clearly seen through... VIEW ESSAY

The stories of the two poems are very contrasting, they oppose one another quite obviously. One about the horrors of war, one about how much ‘fun’ it is. Both poems serve a purpose and perform to it very well, using all kinds of techniques to encourage or discourage young men to join the army. The... VIEW ESSAY

Title:Book-and-Screen: An Analysis of Pride and Prejudice’ and its Cinematic AdaptationAbstract:My courage always rises with every attempt to intimidate me. ” Elizabeth Bennet, Pride and PrejudicePride and Prejudice’ dwells as a piece of literature which continues to go on captivating our hearts to this very day by its realistic portrayal of the then society, wit,... VIEW ESSAY