Many children often dread any visit to hospitals as they are mostly of the view that a hospital is a place where many injections take place and where there are many sick people. In the eyes of a child, a hospital has a bad smell, which is the distinctive disinfectant smell present in all hospitals. As study conducted specifically for children came to a conclusion that, to many of them the colors of hospital walls are dull and not cheerful at all.

Don't use plagiarized sources. Get your custom essay on
“ Hospital Observation ”
Get custom paper
NEW! smart matching with writer

Although the many toys that are present at the pediatric units of many hospital are a huge relief for children in such a somber environment as they are a distraction to the solemnity of a hospital. Many children are also of the view that what happens in the treatment rooms in hospital is a punishment, mainly because of the injections that the nurses may possibly inject them. In many cases, when a child is taken to hospital, he or she is usually scared and worried because he or she often feels that he or she has been taken to a very cold and harsh environment away from the loving and comfort atmosphere of home.

A pediatric clinic that has toys, dolls, little plastic people, blocks, play dough and cheerful children books will make a huge impact on a child as he or she will become more at ease at the hospital (Rollins & Mahan, 2005). A child may feel withdrawn because of the new strangers he or she encounters at the hospital unlike the familiar faces he or she is used to seeing back at home (Thompson & Stanford, 1981).

There are the medical personnel, which is made up of the doctors, nurses and other medics, other patients and the family members and friends of the patients. The medical personnel are usually quite friendly to the children and this makes the children who are admitted in the wards to be at ease during the course of treatment. During visiting hours at the hospital, there are many visitors who mostly comprise of parents, other family members and friends.

Thus, the child will be comfortable. However, lack of familiar people in the hospital will make the child throw some temper tantrums as he or she will feel alone in the world with no one to show love or affection. For instance, absence of the parents of a child who is admitted in the ward may make a child feel depressed and the child may even throw a tantrum (Walker, 2007). The hospital environment includes certain vocabulary that is easily misunderstood by children.

For instance, the term ‘injection’, in the eye of a child is a violent and very painful act and most children feel like they are victims of this ‘horrific’ act (Cox et al, 2006). Such terms may have a negative impact on a child as they often make a child to be psychologically affected and a big resistance from the child would be the reaction if there were a suggestion of a hospital visit from the parents. There are many areas in hospitals where children are restricted to enter.

For instance, children are generally restricted to enter the general ward because there are many chances that a child may contract a disease from this ward because there are many patients suffering from different ailments who have come to seek medical help (Quinton & Rutter, 2008). Other areas are such as the highly prone wards in the hospitals, which admit patients who are suffering from dangerous ailments like tuberculosis and other infectious diseases.

Such restricted areas often pose high risks to children, as there immune system is not very strong like for an adult and they may be infected with some of the diseases that are present in these restricted areas (O’Hagan & Smitt, 1999). Furthermore, parents are usually advised to accompany their children at all times to avoid the children wondering in the hospital corridors alone, as they may gain access to the restricted areas and if this occurs it would have some detrimental effects on a child. Recommended improvements

Play is reassuring and familiar to a child and it is often a way of sharing and communicating feelings and it can help a child to understand what hospital is all about (Walker, 2007). When a child plays with dolls, cars and other toys, this will keep a child in touch with the home the child is familiar with and is missing. Additionally, children benefit a lot from playing through the things that they are experiencing at the hospital, for instance, giving a doll an injection and taking ‘teddies’ temperature.

A sense of warmth and great understanding can be a great relief to children who are admitted as well as those who are in for the routine check-ups (Balter & LeMonda, 2006). The medical staff at the pediatric unit should communicate frequently with the children and assure them constantly that they will get better soon (Schaffer, 2003). This may make the child feel assured that their stay in the hospital will not be for long and that they will return to their homes soon. Children often like to hear this as the promise of home even uplifts their spirits. 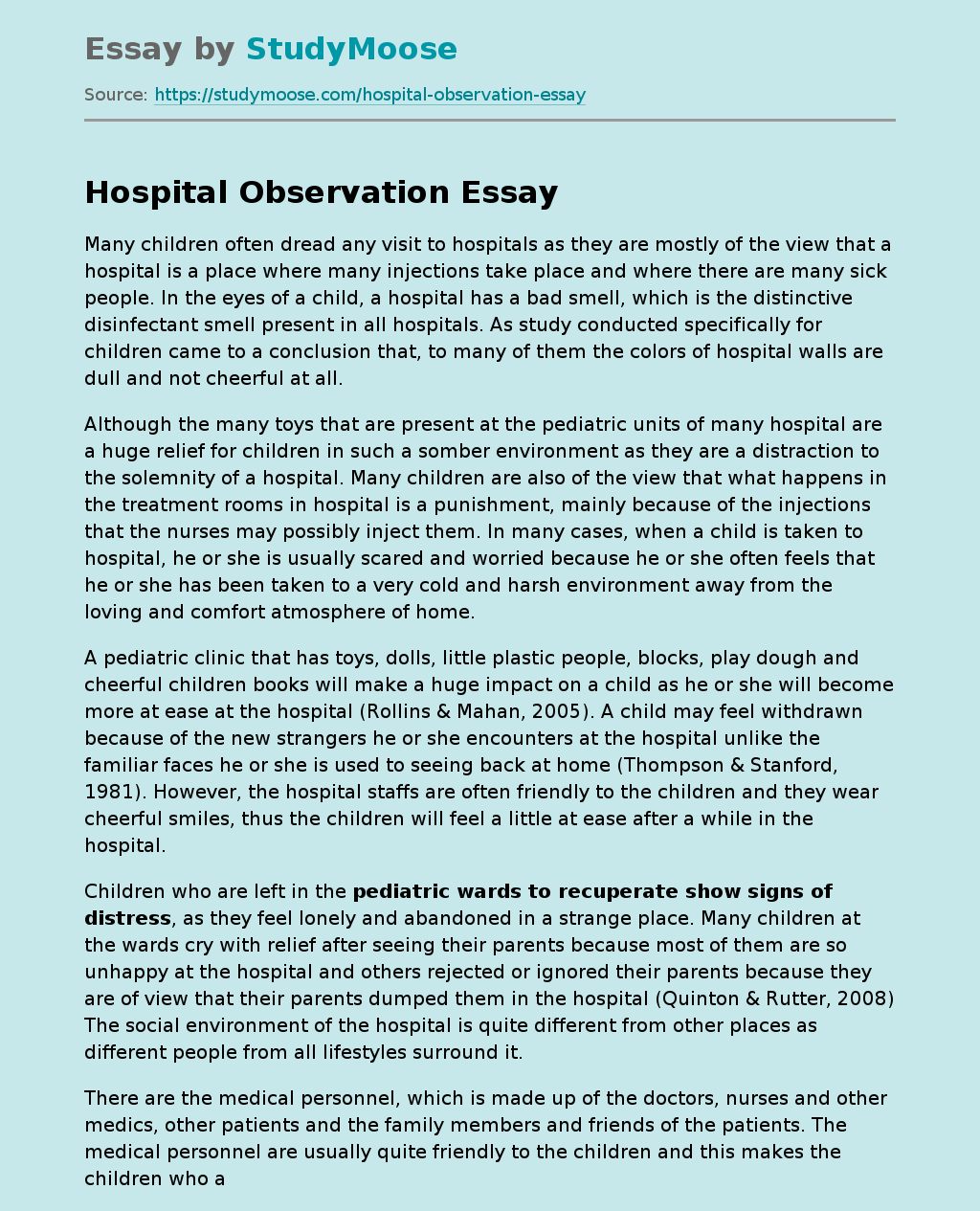