For this task, I will be evaluating Honey and Mumford Learning styles and behaviourism.

Behaviourism began when a man called John Watson wrote and published an article in 1913 about phycology and behaviourism. The theory suggests that all our behaviours are learned and copied from what we see in our environment. ‘Behaviorism refers to a psychological approach which emphasizes scientific and objective methods of investigation. The approach is only concerned with observable stimulus-response behaviours, and states all behaviours are learned through interaction with the environment.

Don't use plagiarized sources. Get your custom essay on
“ Honey and Mumford’s Learning Styles ”
Get custom paper
NEW! smart matching with writer

’ Mcleod S (2017) There are two main types of behaviourism, methodological behaviourism suggests we can only learn and study by observing other behaviours by those around us and in our environment. Radical Behaviourism however which was founded by BF Skinner agrees with the former method but also suggests we are all born with certain behaviours through genetics. Some people may argue against this as the theory does not take into consideration an individual’s free will or mood changes, the theory is only based on what can be physically observed.

It also doesn’t take into consideration the fact that organisms can adapt and change behaviours when faced with new information or environmental changes. Positively this theory has been researched thoroughly and has a powerful advantage with its evidence.

Honey and Mumford’s Learning style theory, has been researched and elaborated from another theorist called Kolb.
The theory is split into 4 different learning styles. These 4 styles are, Activist: learn by doing, Reflector: learn by observation, Theorists: Take logical approaches to tasks, pragmatists: learn by research and experimenting.

‘Honey and Mumford argue that one must identify his natural learning style, understand it and find ways to learn that complement the style’ Watson E (2008). After research, I have found that this theory has been praised for helping learners understand themselves in effect increasing there self-awareness and motivation. The theory can also help a learner gain control over their learning strategies. On the flip side, it has been criticised for putting people in stereotype groups, with learning providers favouring learners that learn in the same style as themselves as they are easier to understand.

In comparison, I struggle to find any significant similarities between these two styles. I would say they are opposites for the reasons outlined above. I personally struggle to agree with the behaviourism theory as I believe all humans have the ability to change depending on the circumstances we are faced with. Personally, I have been in situations where I have had to change my behaviours for the better in order to progress further in my life. I like the idea of different learning styles as I agree that it helps individuals understand themselves. I will personally be using the information from my learning style very lightly however as there have been certain situations that I can say I ‘ swapped’ learning style and can understand why people would not want to be labelled. 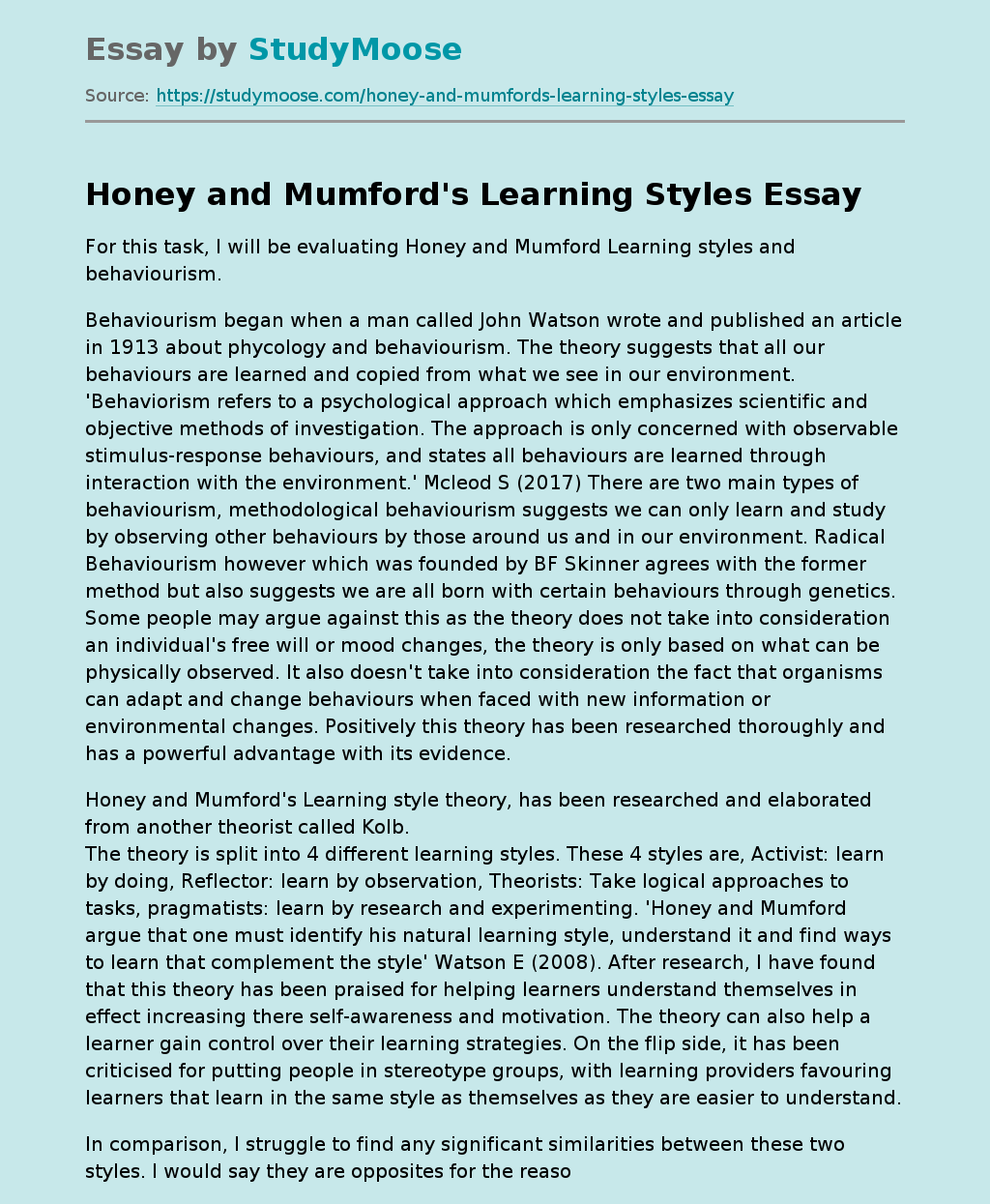