Sheila Delaney's "A Taste of Honey"

Sheila Delaney’s “A Taste of Honey” is a domestic play that focuses on the lives of Helen and Jo; a mother and daughter who live in a small flat in a predominately working-class town in Manchester. The flat is dingy and cold with the descriptions of a single light without a lampshade creating a cold haze that lights the empty flat. The stage directions imply a “comfortless” flat that Helen “an alcoholic, semi-whore’ rents, which paints the image of an undesirable home.

Don't use plagiarized sources. Get your custom essay on
“ Sheila Delaney’s “A Taste of Honey” ”
Get custom paper
NEW! smart matching with writer

Jo referencing that every new flat they seem to reside in gets worse “everything is falling apart” and we’ve no heating “based near the cemetery and the slaughter house” suggesting that they don’t have the normal conventional idea of a family “that’s all we do, live out a travelling bag”, Delaney’s use of describing this flat as horrible as it is, is to hit home to a predominantly middle-class audience the kind of living conditions the working-class have to live in.

“London theatregoers were shocked and intrigued by the urban naturalism of Delaney’s setting, her lower-class characters and the grim events that transpire among them’ Delaney’s use of the poverty within the working class is to shock audiences with “domestic realness” which was a rarity to see on the stage. Something that an audience of the time was only starting to familiarise themselves with as theatre in the late 50’s and early 60’s was only starting to become more accessible to a wider audience from all backgrounds.

From the outset of the play we are welcomed by the spiteful banter between Helen and Jo. It is clear from the beginning that these two characters set out to annoy and irritate each other and there seems no means to stop. This at first hand is shocking as we see Helen, who is supposed to be a mother or in fact just an adult, act in a childish and irresponsible way. We can see a role reversal with a slightly mature Jo battling with a severely immature mother. Helen’s language from the outset is inherently selfish, she completely disregards anything Jo says and turns it back to talking about her and her cold as well as a constant address to the audience or herself “she’d drive you out your mind” . Delaney does this to incorporate the audience into her play, allowing them to be drawn in and feel as if they are part of show itself. Breaking the fourth wall as naturally as this is a good way to keep her audience invested as it is not clear whether the characters are talking to themselves or directly addressing the audience. Either way, the use of the pronoun “you’ perks the audience’s ears and makes them part of the domestic space within the play. Inviting them into the flat itself, blurs the lines of separation between whatever class the audience may be on the outside and in this moment in time brings them to be at one with the characters. “She’s not got a bit of consideration in her. Its self all the time” Helen is in fact an irony within herself because although working-class she seems to look down upon the working class, Delaney shows internal struggle with the working class being working class, but also being unable to escape the working class. Suggesting that perhaps the working class is a suffocating

Helen sees escape from the working class through Peter, who also knows that he doesn’t need to try with Helen, he’s young and “rich” and therefore has the upper hand. He often seems to misinterpret the relationship between Jo and Helen, truly believing that the two hate each other, which can easily be interpreted from the relationship the two portray. “Oh! I could kill her, I could really” However, Delaney subtly hints to a deeper and truer connection. This can be seen when Jo claims to have dreamt about Helen, completely disregarded by Helen until about five minutes into the conversation where she says “anyways, tell me about this dream you had.” This shows that she was listening the whole time although it appears as though she is not, the way they show love is not outward affection but internal affection in their own way. Delaney does this to further emphasise the rawness and realness of her portrayal of the working class. It is often stated “when you see working-class people on stage, it’s a cute version of the working class” A lot of working-class or even just generally ordinary people want drama to have characters they can identify with: humour, passion, high stakes and humanity.”

It is the character of Geoffrey Ingram that creates a riff in the play. After Helen moves out to live with new husband Peter, Jo is abandoned not only by her mother but her lover, and left alone and pregnant in the maisonette in Manchester. This is where her friend from art school “Geoff” comes to stay with her. He has been kicked out his house for what he claims to be for not paying his rent although Jo suggests that is may be because Geoff is openly “gay”. Geoff is the polar opposite to Helen, with a very “effeminate” characteristic, it sets him apart from the common values and traits of masculinity. He becomes Jo’s carer, caring for both her emotional and physical health in a way her mother never used to. Helen was portrayed as a childish almost masculine-like in character (although very feminine) she was immature, alcoholic and sexually free, which at the time was only socially acceptable for men. Like most men, Helen was infantilized. Geoff on the other hand, is not only capable of caring for himself and Jo but also in creating the grotesque house they once lived into a home. He helps Jo prepare for motherhood and even offers to marry her, “It comes natural to you, Geoffrey Ingram. You’d make somebody a wonderful wife”

Delaney uses the societal norm of how the gender roles should behave and completely inverts them, subverting the domestic space to open it wider. We are able to see an openly gay man care for a house and a person in a way a Helen could never. It is a clear social comment on the closed expectations of society and the box you are automatically placed under according to your gender. Geoff is the only one who seems to realise that Helen and Jo need each other and though unconventional, they want to be in each other’s lives. He sacrifices himself and his own happiness in a way a mother would, putting his own feelings behind what he believes to be for Jo’s own wellbeing, “Before I met you, I didn’t care one way or the other ” I didn’t care whether I lived or died. But now …”

For an audience the departure of Geoff being because Helen is so small-minded and rude, is heart-breaking as we are able to see how much Geoff truly cared for Jo and the baby. Delaney’s inclusion of Geoff is to once again stand against societal expectation and instead include a very modern take on gay man in theatre who is not dominated by his sexuality and instead is a person, who not only is caring and loving but deep in character knowing about baking, motherhood and art.

Even minor characters, like Jimmie (The Black Boy). He does not fit in to the socially expected mould of “Blackness” that attracted Jo to him in the first place. She’s attracted to the fact that he is “black” and “exotic” hoping him to be a prince in jungles of Africa, however, he turns out to just be from Cardiff. Helen’s reaction to the idea she is going to have a mixed-race child further extenuates a small-minded society and her suggestion to “drown it” overdramatises racist attitudes at the time to allow an audience to question Helen and their own views.

A taste of honey is all about its portrayal of the domestic space, Shelagh Delaney turned domesticity into art, her aim was to subvert all the stereotypes placed on to people in the 1950’s and comment on actualities of race, gender, class and the fact that people tend to not fit into the socially created mould that they are expected to fit into. Both Jo and Helen are offered new lives, that would allow them to be better off, Helen with Peter in his big house and Jo with Geoff a man who would care and look after her, however, neither get their “happy ending” instead they end up back with each other. Delaney does this to both emphasise that unfortunately, real life does not always have a happy ending as well as the droning and inescapable cyclical nature of life, ending again how it started with Jo again caring for her childish mother. Jo and Helen are each individually fighting to garner their own happiness in this world, for the working class the only way to accept their poverty is to enjoy it. Helen does this through her drinking and sex and Jo with her dreaming and hope for true romance. Which ultimately is their downfall, as “fun is never free for women, especially in this pre-pill world.”

Sheila Delaney's "A Taste of Honey". (2019, Dec 08). Retrieved from https://studymoose.com/sheila-delaneys-a-taste-of-honey-essay 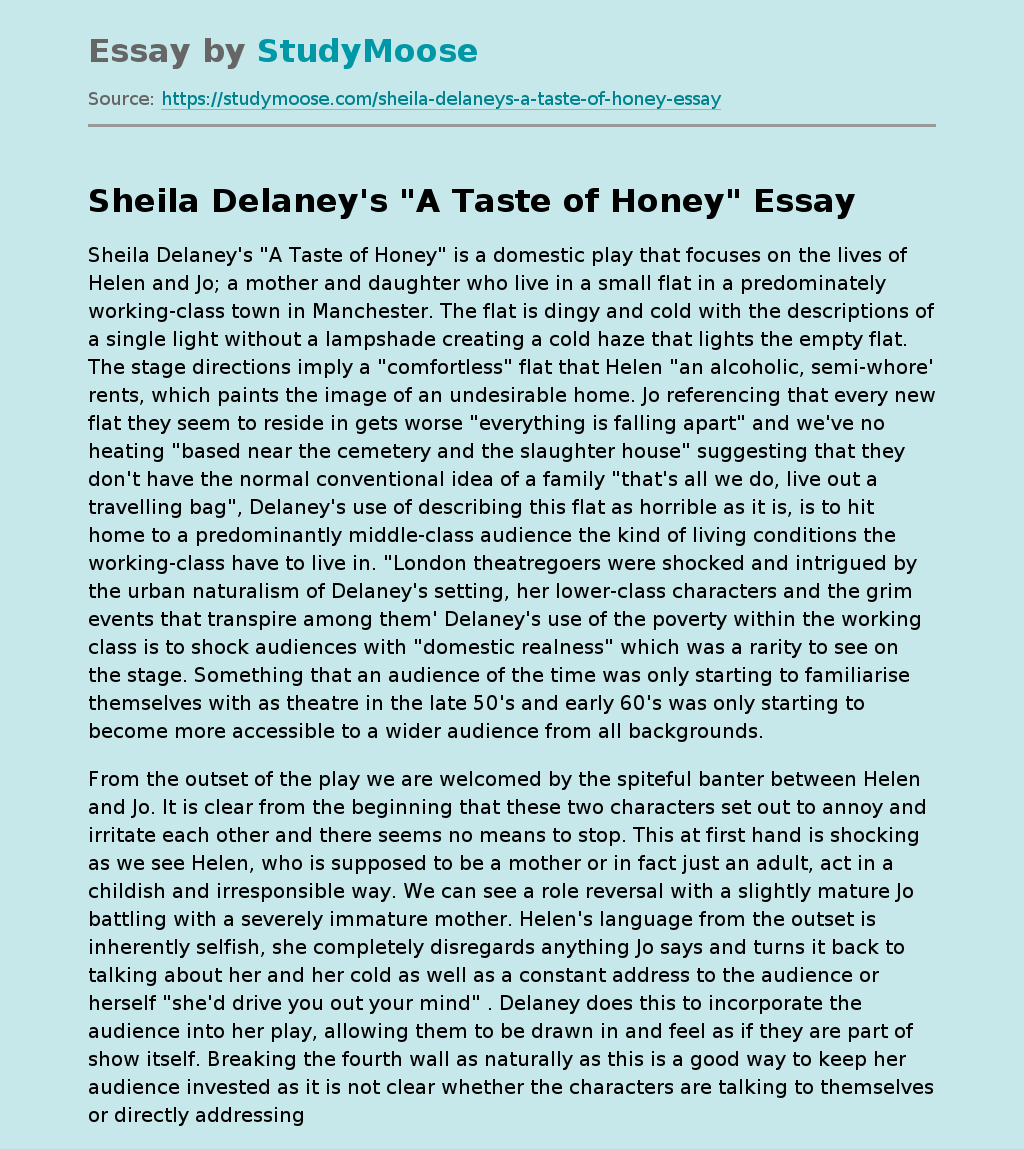