Homoerotism refers to the illustration of homosexual love and desire manifested through visual arts and literature. Although, it is more of a modern concept, Sedgwick acknowledged the pre-existence of such ‘process’ in the Victorian Era that hinges on pathological explanation of the ‘homosexuals’ veering on the predisposition towards both depravity and paederasty (Kaylor 2006). Dracula contains several obvious and not-so-obvious hints on the homoerotism that probably characterizes the restrained movement of the homosexuals of the Late Victorian Era.

A. Parodies of Sexual Excesses of Dracula The narrative of the story contains heavy sexual undertones and indulgences that encompass even that of the human characters of the story.

Don't use plagiarized sources. Get your custom essay on
“ Homoerotism and Dracula ”
Get custom paper
NEW! smart matching with writer

Jonathan Harker exhibits sybaritic tendencies towards the dark and desirous evil passions during his encounter with the Brides of Dracula: All three had brilliant white teeth, that shone like pearls against the ruby of their voluptuous lips. There was something about them that made me uneasy, some longing and at the same time deadly fear.

I felt in my heart a wicked and burning desire that they would kiss me with those red lips. Stokes brings insight to the darker passions that are discretely enjoyed in the Late Victorian Era. Sex is not a sacred act but an indulgence of the senses and brain. The conscious aim is to explore sexuality in its most banal and radical sense. Through the Brides of Dracula, Stokes suggests the exploration of multiple sex partners. There is no limit to sexual freedom; it exceeds gender and number, even.

Such decadence or feast is patterned from the Greek paedaristic tradition and is patterned throughout the cascade of the story. The excitement of the underlying sexual tones is unmistakable and obviously intentional given the pariah treatment for the ‘unconventional’ during the Victorian Period. The homoerotic desires will continually persist throughout the entirety of the gothic novel. The eroticism for the narrative is strangely luring and animalistic. Dracula bades Harker into the world of secrecy, indulgence and delight, saying “Welcome to my house!

Enter freely. Go safely, and leave something of the happiness you bring! … I am Dracula; and I bid you welcome. ” Control is mocked; Desire, satisfaction and all that suggests [sexual] indulgence are offered by Dracula. Beneath the civilized veneer of the aristocrat Dracula lay a perverted nature which implies the status of the homosexuals and the repressed sexuality of the stuffy Victorian Period. Sexual harem, incestuous relationships, and men-to-men relations are discretely portrayed in the Bram Stoke’s Dracula albeit in a hyperbolic manner.

The Brides of Dracula are not ‘legal’ brides but in actuality, family relations of Dracula who bear a striking and similar morphological features with him which suggests, on the long run, a degree of incestuous relationship enjoyed by them. Aside from sexual harem and a hint of incest, men-to-men relation has played an important element in the development of the sexual undertones of the Gothic novel. Ambiguity in sexual preference and the flexibility of Dracula for sexual predisposition is implicit when he admonishes his Brides who want to ravish Harker, “This man belongs to me!

” Such possession and temperamental display of possessive attitude differs from his statement on—“Yes, I too can love. You yourselves can tell it from the past. Is it not so? Well, now I promise you that when I am done with him you shall kiss him at your will. ” Dracula psychosexual conditioning is not clear. However, it is asserted that the ambiguity and the his sexual inversions may have been an indicator for the confusion and the psychological meanderings of a homosexuals presented in a strict and stuffy society. 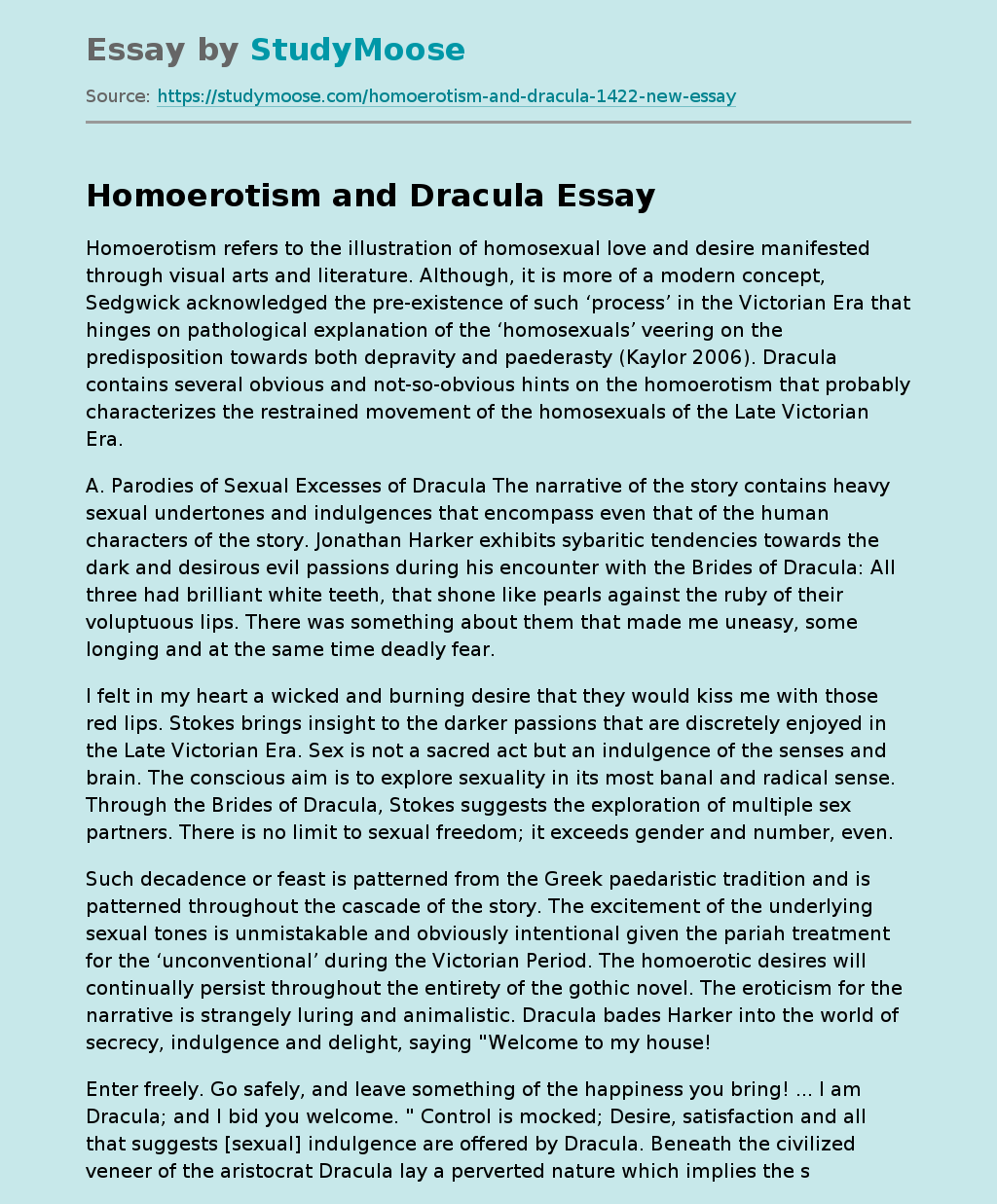