D. refers to the age of Hellenism under the rule of Alexander the Great, king of Macedonia. The period 332 B. C. marked the conquest of Judea by the Greeks, which subsequently imposed the dissemination of the Greek way of life, taxation, and economic activities designed to acquire economic gains. After the death of Alexander, his generals divided the empire and consequently fought over his empire. Judah fell under direct control of Ptolemy 1 of Egypt, but he did not seriously interfered in its religious affairs (Chapin, H.

Don't use plagiarized sources. Get your custom essay on
“ History of Israel and the Holy Land 332 B.C. to 70 A.D. ”
Get custom paper
NEW! smart matching with writer

988, Paragraph 1 Hellenism and the Roman conquest). However, after Ptolemy 1’s death, his successor was supplanted by the Seleucids of Syria, and in 175 B. C. Antiochus IV grabbed power. He then orchestrated a campaign against Judaism and in 167 B. C. he went and sacked the temple, (which was built in 520 B. C. ) of all its precious belongings. This utter desecration and gross violation of the temple motivated a successful Jewish uprising under the able leadership of Judas Maccabaeus.

He then established a theocratic government, which saw the rise of the Hasmonean Dynasty under the leadership of Simon Maccabaeus who was at the same time the spiritual leader,being the High Priest, and the commander-in-chief of the military. The coming of the Romans more than half a century later saw the rise of the chief priests to power and the eventual destruction of the temple in 70 A. D. in the hands of the Romans.

The Second Temple 332 B. C. to 70 A. D. The Jewish society rose to power comparable in scope to the ancient Davidic Kingdom under Hasmonean Dynasty, although both religious and political discord is soaring between the Pharisees, who were the interpreters of the written law and the Sadducees, the aristocratic priestly class who implements strict obedience to the written law. However, with the coming of the Romans in 65 B. C. Jerusalem fell in the hands of the Romans, which ended the eighty years of independent Jewish sovereignty and heralded the period of Roman domination of Israel, which began just the same period.

The Romans appointed Herod, an Idumaean, as a puppet king of Judah. His appointment as king of the Jews was subsequently confirmed by the Roman Senate in 37 B. C. He then rebuilt and magnified the platform of the temple and constructed many important buildings such as palaces, theater, citadel, hippodrome, and agora modeled after both the Hellenistic and Roman architecture. An internet article published by Planet Ware . com entitled Jerusalem, Israel cited that after Herod’s death in 4 B. C. Jerusalem was under the care of the high priests, which was under Roman Procurators (Planet Ware, Par. 2). Chapin noted that Rome granted the Jew religious autonomy as well as some legislative and judicial rights through the Sanhedrin (Chapin, par. 5, Hellenism and the Roman Conquest). The second temple played a great role in the so-called “city of the high priest” that is, referring to the prominence of the Jewish religious leaders during this time.

The Great Sanhedrin made the temple mount in Jerusalem the seat of both the religious and judicial powers vested upon them by the Roman Procurators. Their scope of authority includes religious, political, and legal authority such as trying a high priest, supervising certain rituals, and even declaring war (Chapin). This religious and judicial body was primarily composed of priestly Sadducees, which may be numbering of about seventy-one sages. The Sanhedrin’s control and judicial authority ended with the rise to power of Agrippa 1 in 41 to 44 B. C.

The grand son of Herod 1 the Great, Agrippa 1 extended the city northward by constructing the third wall. However, the fanatical sect of the Jewish nationalist movement known as the zealot challenged the Roman control of Judah in A. D. 66. This uprising brought the Roman legions to a protracted siege, which was carried out by Vespasian, the Roman commander in Judah. The revolt however was crushed by his son Titus in A. D. 70 and Jerusalem and the second temple was destroyed by the Romans (Chapin) Hellenism and the Jews (Evaluations and Commendations)

Hellenization, according to an internet article entitled “Celtic” and Medeterranean Interaction is the process by which non-Greeks were made more or less Greeks, assimilated into Greek culture if not acculturated. The article noted that the extent of Hellenization during the time of Alexander reach even further to the lands of the Barbarians (Celtic and Mideterranean Interaction). The article cited that Greeks abroad carried with them any thing that could help in advancing Greekness and they were more emphatically consciously Greeks and built cities and towns introducing urban structures and new ideas.

Chapin pointed out that despite of the strong emphasis on priestly rule and Judaism, Jewish society was greatly influenced by the Greek Hellenism, particularly cities like Jerusalem, except in their adherence to monotheistic faith. However, life in the provinces and rural areas was comparatively unchanged (Chapin). Jerusalem subtly yet speedily adopted the Greek culture particularly the Greek language, games and sports, and even the early literature of the new faith, Christianity (Chapin, Par. ). According to an internet article entitled The Impact of Hellenism on the Jews, though Hellenism was neither offensive nor beneficial yet it poses serious challenge to Judaism (Old Testament History, Par. 1). The article noted that Hellenistic culture presents serious threats to Judaism in the same way that idolatry of the Canaanites neighbor of the Pre-Exilic Israel served as a great temptation, which had caused their nation’s destruction and later Diasporas.

The impact of Hellenism on Post Exilic Israel was difficult them to resist in remaining true to their faith as Hellenism offers relief from laborious struggle for existence. Hellenism viewed life as a continuous series of social festivities, comforts, and ease. It was under Hellenistic period that public places for eating and bathing was offered to the public with customary music of strings such as the harp (O. T. History, par. 7) which today may be characterized by the restaurants and public swimming pools.

Great public libraries, potential economic opportunities, and sophisticated Greek education would have strong appeal to may nobler Jews and merchants, which made the Hellenistic way of life easily acceptable. On the other hand, conservative Jews particularly Palestinian Jews were not impressed by the social and cultural advances brought about by Hellenism, courtesy of the Greeks. These conservatives despised the Hellenized Jews on the grounds that they had compromised their religion.

An internet article entitled The Church History cited that the Hellenized Jews were forbidden in the temple rather they were directed to attend Greek-speaking synagogues to hear and understand the Torah being read in Greek as they could no longer speak nor understand Hebrew. The purpose therefore, of Hellenization was to assimilate every culture, or the acculturation of every nation’s culture under one culture, the Greek culture, is not only a brilliant idea or military strategy if indeed it can be categorized in that way, rather, it is highly advance idea designed to rule the world in utmost peace and economic prosperity.

This impact could have changed the course of history had Alexander livelonger than he had lived. It cannot be denied that the influence of Hellenism still benefits today’s generations and the idea of hellenization still dominates the society in many ways. Interpretation Hellenism was a subtle way of conquering the world. Alexander may have conquered much of the known world during his time but his military and political leadership did not live long enough to achieve what he desired, to conquer the world.

Perhaps Hellenism was intended by Alexander for a peaceful conquest. Indeed, his model Hellenistic community in Alexandria, Egypt was meant to attract the known civilizations of the benefit of Hellenization. True to his intention, the world was conquered by the Greeks not by swords and spears or by sheer military force but by festivities, by cultural and educational advancement, and by economic opportunities Hellenism offers. Today, the Greek influence still remains after thousands of years in many aspects of the social and cultural life, including arts.

Hellenization can be compared to the idea of the democracy promoted by the remaining super power of the world today. By Hellenizing the known world, Alexander can build an alliance with many countries just like the idea of democracy. In other words the same concept in promoting democracy lies in the Hellenization. It symbolized the hegemonic power of Greece under the leadership of Alexander the Great. Conclusions The history of Israel from 332 B. C. up to 70 A. D. as a monument of Greece’ rise to power, and dominance of the world, at the height of their glory, as well as the marks of Israel’s resurgence to power which they so longed, under the Hasmonean dynasty, although this period marks both rise and fall of the three nations involve, its most important contribution in human civilizations was the spread of Hellenism, which truly brought not only economic benefits, but also culturally and socially, and the developments of sports. Hellenism has brought much contribution that even the generation of today is benefiting.

The many borrowed words that help us understand meanings of the fast events are just one of the many benefits of Hellenization. Hellenization therefore symbolizes the hegemony of the Greek nation as well as Alexander’s desire to rule the world in peace and in prosperity as by acculturation and assimilation, it would have mean no boundaries or no enemies, rather it promotes unity and cooperation among nations. The blessings of democracy that we now enjoy may be compare to the blessings of Hellenism had Alexander livelonger. 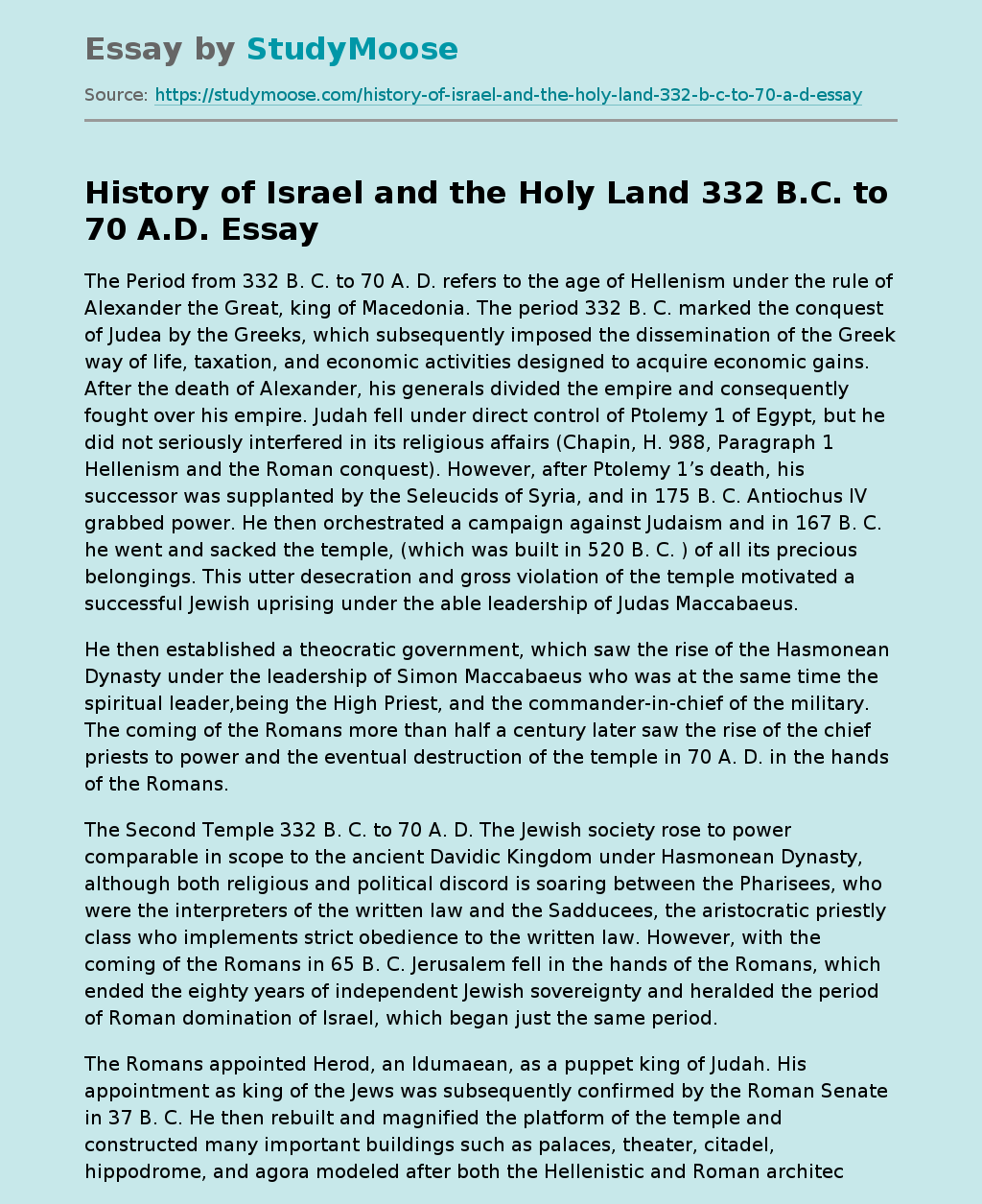