Hitler’s invasion of the _____ in June 1941 proved that he would consistently break agreements.
Soviet Union
Hitler intended to defeat Great Britain by

a massive bombing attack.
an aggressive use of tanks.
an attack on the air force.
a mass invasion of troops.

a massive bombing attack.
A “blitz” is different from a “blitzkrieg” because only a “blitz”

Don't use plagiarized sources. Get your custom essay on
“ History Final Part 3 ”
Get custom paper
NEW! smart matching with writer

relies exclusively on air power.
At the beginning of WWII, what action by Winston Churchill influenced Hitler’s strategy?

Churchill refused to negotiate.
Before invading Poland, Hitler reached a secret agreement with the _______.
Soviet Union
Which country was the last to join the Allied Powers?

United States
Which best describes the policy of appeasement followed by Great Britain and France in the 1930s?

allowing Germany to take aggressive steps in hopes of maintaining peace
With which statement would Stalin and Churchill most likely agree?

War entails many months of suffering.
Victory must be attained at all costs.

Victory must occur on land and sea.

Victory must be attained at all costs.
Why were the British able to win the Battle of Britain?

Their radar equipment was effective.
Their leader urged them to keep fighting Germany.
Their air force was more determined and powerful than Germany’s.
Their spies kept them informed by sending secret messages.

Their radar equipment was effective.
What is the best definition of a “blitzkrieg”?

rapid invasion by air and land
What caused Great Britain and France to declare war on Germany in 1939?

the invasion of Poland
Great Britain’s success in the Battle of Britain and the Soviet defense of Russia proved that Hitler’s army could be _____.
defeated
In 1940, Hitler indicated his switch to military conquest rather than annexation by invading

Belgium and the Netherlands.
Poland and Russia.
Austria and Czechoslovakia.
Turkey and Sweden.

Belgium and the Netherlands.
Which country was a member of the Axis powers?

Japan
Which aggressive action did Germany take in the 1930s?

He believed that Great Britain and France would choose not to respond to his actions.
Why did the Soviet Union join the Allies?

Stalin was afraid of Hitler.
Hitler had broken a pact and attacked.
Hitler was becoming too powerful in Eastern Europe.
Stalin wished to take control of territories captured by Germany.

Hitler had broken a pact and attacked.
What was one reason the Battle of Barbarossa became a turning point in the war?

Hideki Tojo
In response to Japan’s aggressive actions in the Pacific in the 1930s, the United States

signed a peace treaty with Germany and Italy.
imposed an embargo on shipping war goods and petroleum products to Japan.
sent bombers over Japan in an effort to frighten that nation’s rulers.
embarked on a policy of disarmament.

imposed an embargo on shipping war goods and petroleum products to Japan.
Read these sentences from a famous speech made by President Roosevelt in 1941.

Yesterday, December 7th, 1941 – a date which will live in infamy – the United States of America was suddenly and deliberately attacked by naval and air forces of the Empire of Japan. The United States was at peace with that nation and, at the solicitation of Japan, was still in conversation with its government and its emperor looking toward the maintenance of peace in the Pacific.
-President Franklin D. Roosevelt, 1941

To which event was the president referring?

the attack on Pearl Harbor
To win the war in the Pacific, the United States adopted a strategy called

island-hopping.
Which of these terms best describes the official foreign policy of the United States at the start of World War II in 1939?

isolationist
In a major blow to Japan, Allied troops returned to free which of these areas from Japanese control in 1944?

the Philippines
Where did the Bataan Death March take place?

the Philippines
President Roosevelt called December 7, 1941, “a date which will live in infamy.” Which of these definitions is the best meaning of the word “infamy”?

oil
After their attack on Pearl Harbor, what did Japanese leaders do next?

They tried to gain as much territory in the Pacific as possible.
Which statements describe actions taken by Japan before the Pearl Harbor attack that resulted in strained relations with the United States? Check all that apply.

It entered into an alliance with Germany and Italy.
It placed an embargo on imports from the United States.
It occupied French Indochina.
It torpedoed American ships in the Pacific.
It invaded China to gain control.
It allied itself with Britain and France.

It entered into an alliance with Germany and Italy.
It occupied French Indochina.
It invaded China to gain control.
Who was president of the United States when World War II started in Europe?

Franklin D. Roosevelt
Which of these actions did the United States take immediately after the attack on Pearl Harbor?

The United States ordered the evacuation of its citizens from the West Coast.
Congress voted to continue its isolationist policy.
American forces sailed to Japan and began to attack it.
Congress declared war on Japan the next day.

Congress declared war on Japan the next day.
Which statements accurately describe the Japanese attack on Pearl Harbor? Check all that apply.

The Americans were unprepared for the attack.
The American Navy was severely weakened.
An official government order that limits trade with another nation to punish or pressure that nation in some way is known as

an act of war.
an embargo.
isolationism.
appeasement.

an embargo.
Which contributed to the Battle of Stalingrad becoming a turning point in the war? Check all that apply.

an extensive loss of German soldiers
exhausted German supplies
the end of the German advance
How did the Soviet’s win at Stalingrad help advance the Allies’ Europe First strategy?

It prompted several Axis countries in Eastern Europe to switch their allegiance.
It enabled the Soviets to push the eastern front toward Germany.
It consolidated Soviet power in Russia.
It removed the German threat on the war’s eastern front.

It enabled the Soviets to push the eastern front toward Germany.
Which strategies did the United States employ in order to achieve victory in the Pacific? Check all that apply.

island-hopping
bombing
How do the terms Omaha, Sword, and Utah relate to the Battle of Normandy?

They are code names for the sections of Normandy Beach that were attacked.
Which most contributed to the Battle of Stalingrad becoming a turning point in the war?

The German army exhausted all of their supplies.
Did D-Day ultimately end German ambitions in Europe?

Yes, German leaders surrendered shortly after the D-Day invasion.
No, the Germans continued fighting and attempted offensive measures.
Yes, D-Day weakened German forces, who abandoned the military en masse.
No, the Germans had a steady supply of young soldiers to continue the fight.

No, the Germans continued fighting and attempted offensive measures.
Which best describes why Iwo Jima was significant in U.S. attempts to reach Japan?

The island had airfields that the U.S. military needed.
Which battle or event caused the most Japanese casualties?

the Battle of Okinawa
Which best explains why the Allies employed the Europe First strategy during World War II?

The Allies wanted to ensure that Germany did not continue to conquer European territory.
The most likely reason why President Truman ordered the atomic bomb dropped on Japan was to

show US military strength.
force Japan to surrender to the Allies.
guarantee a US victory.
prevent the Soviet invasion of Japan.

force Japan to surrender to the Allies.
How did the Allied victory in WWII change the world? Check all that apply.

It created new peacemaking groups.
It started a nuclear arms race.
It destroyed American-German relations.
It ended the era of atomic weapons.
It led to the Cold War.

It created new peacemaking groups.
It started a nuclear arms race.
It led to the Cold War.
Why was the battle of El Alamein significant?

The Allies defeated a major German commander.
The German army defeated the Allies severely.
It allowed Allied troops access to Egypt.
It served as the turning point of World War II.

The Allies defeated a major German commander.
Who was the Supreme Allied Commander in Europe during World War II?

Dwight D. Eisenhower
Which is true about the battle of Iwo Jima?

The second bomb was aimed at Japan’s largest munitions factory.
Japan refused to surrender after the first bomb was dropped.
The United States wanted to cause as much damage as possible.
The bombs worked in conjunction with each other.

Japan refused to surrender after the first bomb was dropped.
Joe Richards
Share 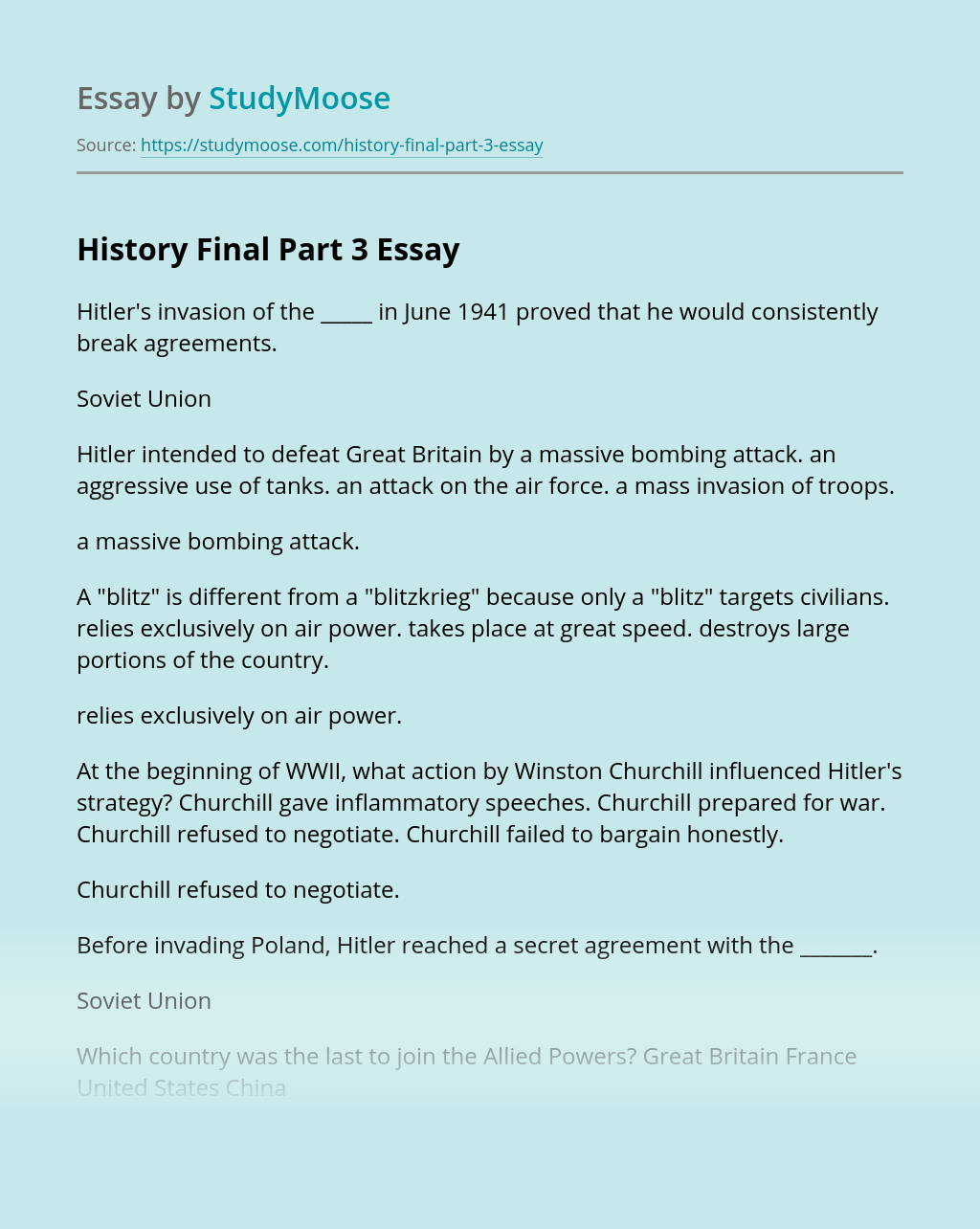