Hewlett-Packard is a pioneer of printer industry, and they considered getting involved in to the Rigid Disk Drives. It was not convinced at first, and they needed professional advice from The Disk Memory Division (DMD). Bruce Spenner, the general manager of DMD, came to Hewlett-Packard and set up a project working on developing The Kittyhawk. He picked up the project team that meant they were going to figure out what the specification would be and how they were able to get access to achieving their goals.

Don't use plagiarized sources.
Get Your Custom Essay on ﻿Hewlett-Packard: Case Analysis Just from $13,9/Page

In addition, they analyzed every factors of marketing to target their costumers, indentify their competitors, and find the potential market of the Kittyhawk. They went through a hard time because only few companies might have the needs of the Kittyhawk. Eventually, they cooperated with Nintendo to obtain profit on 1.3” disk drive and make it breakeven to prevent failure of the new development.

Project: The project was too big so that it was difficult to implement.

The case of Hewlett-Packard had shown how important disruptive technology was for a company. In order to make the development of disruptive technology perfect, every company is supposed to clarify everything clearly such as the market, the price, the competitors, and the strategic partners. Moreover, those factors should be considered in advanced. Some recommendations are provided in the next section.

I believe that Hewlett-Packard was working on Disruptive Technology because they were creating a new product in a way which was totally different from the others. Being the first mover is the purpose that every firm is supposed to always work hard on, and I am definitely on Hewlett-Packard’s side. They did really well on project management that means they realized every variance before they started developing the new product and they knew how risky it was. In my opinion, we would never know what the result is going to be, and the only thing we can do is accomplish every preparation as much as we can. How to work on Disruptive technology

The project should be considered an experiment to make sure Hewlett-Packard would not be damaged by failure. Moreover, disruptive technology should be profitable, and the market should big enough as well. I do not think a big scale company, as Hewlett-Packard would like to focus on many niche markets. The most important thing is before the beginning of developing new disruptive product; the target market should be indentified.

The target market should be recognized advance

When a company is trying to develop a new disruptive product, they are supposed to identify whom they are going to sell and what product might able to integrate with it. For the case of Kittyhawk, Hewlett-Packard should have negotiated with their potential strategic partners to prevent failure on targeting market. Such as the price, the capacity, and the efficiency, those are important to every stakeholder. It is essential nowadays because most disruptive technology is costly.

None of those big companies such as Hewlett-Packard wants to spend a bunch of money on a useless project. Again, every company should necessarily focus on developing disruptive technology because this is the only way to keep the company being competitive. Furthermore, being a first mover always maximum the profit in your company, the innovated opportunity provides the company access to succeed. The importance of innovation will never change in the next several decades. 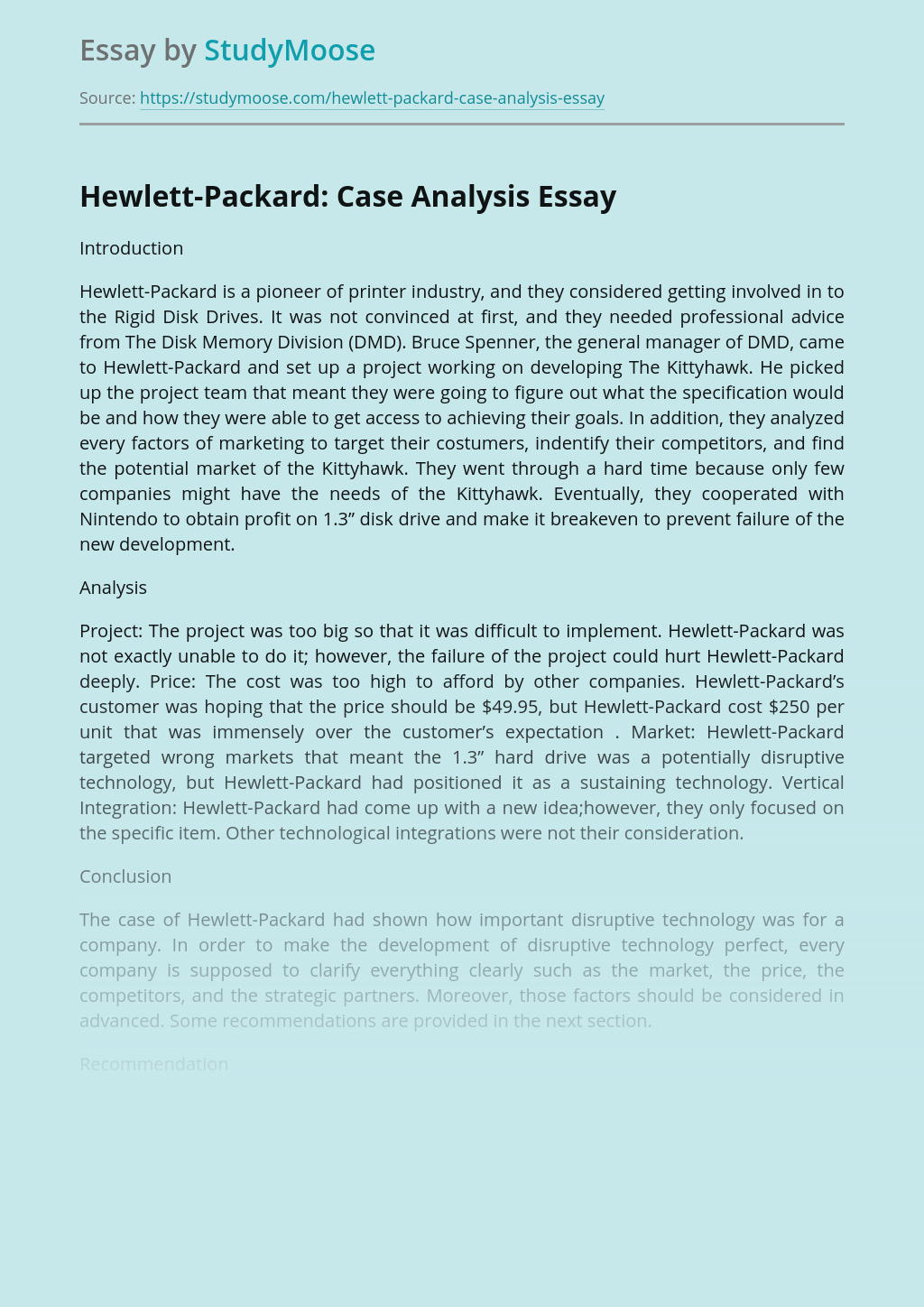 Benefit of cloud computing and example

Introduction In our generation so many things are different. The advent of technology has changed the way we live, work and spend leisure time. Computer was considered the lifeblood of society; people are everywhere. And the advancement in discoveries, both in hardware and software, keep coming, day in and day out. Technology changes and improves...

Many of us think that computers are many times faster, more powerful and more capable when compared to humans simply because they can perform calculations thousands of time faster, workout logical computations without error and store memory at incredible speeds with flawless accuracy. Human Brain: We can only estimate the processing power of the average...

There are some innovation and technology enthusiasts who claim that computer-based learning will soon replace teachers. Just take a look at some recent op-eds by Andy Kessler and Richard Galant. They point to the accessibility of information via the Internet and the recent advances in online instruction and adaptive learning as harbingers of teacher obsolescence....