She internalizes her problems too much and that leads to her tragic downfall. She identifies herself so closely with the Belmont River that on her 30th birthday she drowns herself where her brother committed suicide fifteen years earlier. She destroys her body and her youth in the most cruel and violent way. That is how sexual unfulfillment breeds madness that results in violence. By the Bog of Cats by Marins Carr presents a female character – Hester Swane and her fateful attempt to reclaim her lover Carthage, her child Josie, and her home.

Don't use plagiarized sources. Get your custom essay on
“ Hester Swane ”
Get custom paper
NEW! smart matching with writer

The story begins in a very innocent manner. Hester Swane ( one of the Gypsy like people ) has defied her nomadic heritage and stayed near the Bog of Cats since childhood, has settled with a local man Carthage Kilbride and had a child with him _ Josie. However, Carthage leaves her to marry Caroline Cassidy, the daughter of a wealthy farmer. Compounding Hester’s heartbreak, Carthage plans to move his new bride into Hester’s house and most likely take the custody of Josie .

Her sexual attractiveness fails in the interactions with Carthage who does not seem to be happy with Caroline, however he refuses Hester’s begging for coming back to her. Swane’s brakdown also results from the fact that her daughter – an embodiment of her sexuality, a fruit of her sexual relationship – is going to be taken away from her. Hester plans a revenge, her violent deeds – burning the house down, killing her own child and herself – could have seen merely selfish and self-destructive.

However, they unveil layers of hurt and pain beneath Hester’s defiance.

Her failure concerning the relationship with Carthage, her failure in exerpting her power through reminding him their sexual behaviour they used to perform, all this caused despair which grew into madness that gave birth to violence. High emotions and dark secrets from the past, as well as external froces that affect Hester, drive her to commit violence on herself, her daughter and her lover. It was she who made him a free man, a worthy lover, a kind of a settled man with his own house and land, and he made her declare a ‘viscious war’ against Kilbrides and Cassidies.

Thus, her madness and violence seem to be justified by her individual tragedy. Violence, here equal to revenge, although overwhelmingly cruel and disastruous, can be fully justified as the only solution for a woman who lost everything that is valuable in her life : love, attractiveness and dreams of a better future. The Beauty Queen of Linane, written by Martin McDonagh, is another example of how a forbidden and made impossible to achieve sexuality causes madness and breeds violence.

The plot is primarily about the relationship between a mother and a daughter in an isolated part of Ireland. The mother, Mag Folan, is a hypochondriac and abuses the daughter, Maureen, preventing her to have her own life, to a point where the daughter has become bitter and neurotic. Together they have formed a co-dependent and depressing sadomasochistic relationship. Maureen has a chance for normalcy and fulfillment of her longing for sexual satisfaction, when she runs into Pato Dooley, a normal and stable local who becomes enamoured of her.

However, Mag steps in and subverts their growing relationship, driving Maureen to insanity, and thus making her an image of herself. The story is about people who are in a difficult emotional situation. These people are unable to extricate themselves from it, and people who try to help them either barely manage walk with their own sanity or get sucked into their neurosis. Right from the beginning, we know that Maureen’s relationship with Pato is doomed. McDonagh paints a harsh and brutal portrait of needs not being fulfilled which causes violence towards the closest persons in the world as parents are.

McDonagh portraits Mag and Maureen’s selfishness and bitterness unbelievably realistically. The play starts from a scene where Maureen serves her abusive mother a Complan and porridge. Mag prevents her daughter from any kind of entertainment and when Ray Dooley comes with a message about a party, she does not pass it to Maureen. Maureen gets to know it incidentally which makes her mad and she exerpts her anger orally on her motehr – she is being vulgar and abusive towards Mag. She comes back from the party with Pato Dooley with whom she spaends the night.

In the morning, while three of them are having the tea, it comes to the light that Maureen spent a month in Difford Hall in England – an asylum fro mental disorders, and that once she burnt her mother’s hand with boiling oil. Pato leaves to work in England and writes a letter to Maureen from which we get to know that nothing happened the night they were together. Pato also wants Maureen to live with him in Boston. However, the mother, being affraid he would be left on her own, picks up the letter, reads it and destroys it never passing it to her daughter. 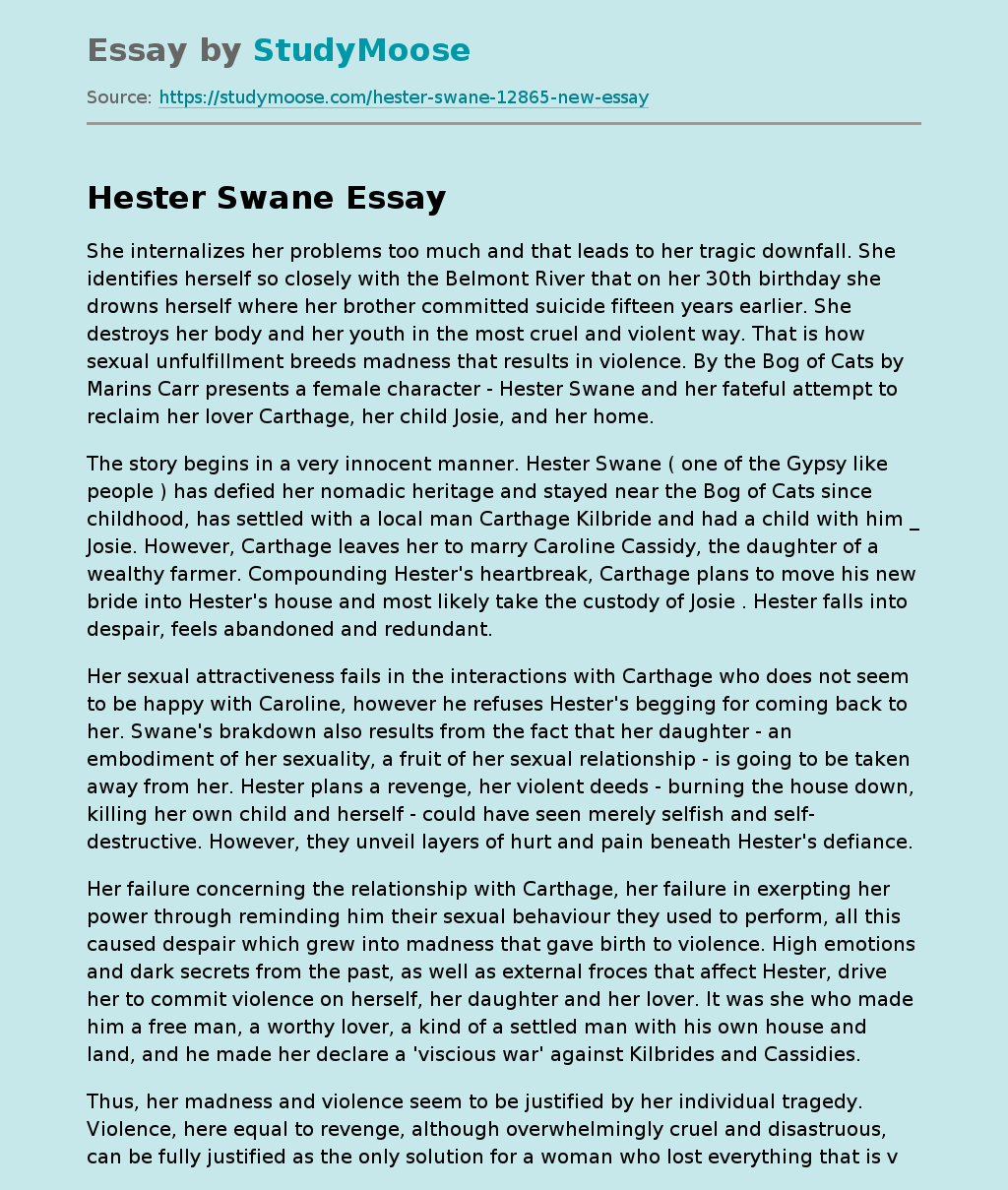