Henry David Thoreau and His Contribution to Transcendentalism

Henry David Thoreau, a French descendant, was born in 1817 in Concord, Massachusetts; a graduate of Harvard College with no literary distinction. Throughout his life he executed a very strong Saxon genius, as his ancestors had been known. As an ordinary young man, he began to work for a living. After his graduation, he joined his brother in teaching in a private school, which he stayed for a while. He later left to enter into manufacturing work – making a different and better pencil.

Don't use plagiarized sources. Get your custom essay on
“ Henry David Thoreau and His Contribution to Transcendentalism ”
Get custom paper
NEW! smart matching with writer

He was successful in his business but refused doing the same thing.

He went back to school to teach and deliver lectures; became a private tutor to children of prominent families. He got employment, yet his life seemed no meaning for he thought of doing what he is called for. Only by then he will find meaning in his existence. For his friends, he was full of courage, had good cheer and deep affection for his family. His love for a simple living moved him to devote most of his writing about natural surroundings and natural history.

His natural inclination in philosophic views made him wrote, which as young Henry, displayed independent thoughts that caught Mr. Ralph Waldo Emerson’s interest about the boy.

A good friendship actually started there between Mr. Emerson and Henry Thoreau, which despite age difference and of temperamental impediments found deep and lasting friendship. Thoreau worked for the family as tutor for Emerson kids. From Thoreau’s friendship with Mr. Emerson his ideology and inclination to the philosophy of transcendentalism began.

As Ian Ward stated, “The interest in transcendentalism that Thoreau shared with his sometime mentor, Ralph Waldo Emerson, was born of this gestation, as was the comparable rejection of ideology which underpinned this new intellectual divinity.”

Henry David Thoreau and Transcendentalism Transcendentalism as a movement began as a radical religious movement, which is opposed to conservative institution, though the philosophical concept was developed by Plato. Historically, transcendentalism according to Peter Carafiol, “is an intellectual property growing out of Kant and mediated by English and German Romanticism. ” Formerly, it was dissatisfaction with Unitarianism with congregationalism and Protestantism, and with Catholicism, as the Carafiol said.

For the Americans, transcendentalism frustrates the desire for definition by leaving out so many out of the problems scholars have raised about it. It involves an interpretation rather than exposition. It is a mental and a spiritual attitude sought to find the source of all truth within the nature of man. It is actually in the sphere of religion; the narrower sense of Unitarianism of religion. Thoreau gave a new outlook for transcendentalism since he is inclined to nature and surroundings.

He was by character a scientist, which was evident in his writings and works. And his growing idea of transcendentalism was often inclined with science, which was opposed to the belief of others that identified Thoreau in the line of the scientists while others recognized him as a philosopher. Alfred I. Tauber, stated that, “he put himself at odds both with the idealist moralizing philosophy of Emersonian Transcendentalism and with ascendant professionalized positivistic science which divorced nature from the knowing subject.”

Indeed, he was able to draw unity to different engagement to intellectual inquiry that he had, and despite competing interests, as Tauber further stated, “Thoreau was able to follow his own path in studying nature, guided by the same fierce independence that marked both his experimentation in personal economy and his political advocacy” through which, the term transcendentalism has been applied to science known as the doctrine of metaphysical idealism. At this crossroads of Thoreau’s life emerged his contribution in Transcendentalism and the view about metaphysical idealism.

Thoreau’s Contribution to Transcendentalism (development in Henry’s life) Thoreau had lived a normal life just like anybody else that observed and experienced negative sides of life. However, upon his realization, he chose to reside in a house in the woods alone for sometime. During his life, he made some contribution to the American transcendentalism. Remarkably, Thoreau’s writings from letters to books contributed to the spread of Transcendentalism during his period.

It made a significant effect on many campaign against social unrest and to the development of the concept of the philosophy. Thoreau’s writings would actually tour the reader about his life and his contribution to the movement. The following are some of the contributions that attributed to the development in his life. Manhood and Race Henry David Thoreau as a young boy was often working with his mother at the farm grazing pastures. From this experience, he drew his love for solitude and communion with nature.

Already associated with Emerson, he moved and lived in a small house alongside the northern shore of Walden Pond where he spent his life cultivating beans and other vegetables and taking care of animals. His many desperations and desperation that he had seen around developed in him representative isolation. He had seen slaves, laboring men; men out of desperation had to work continuously for economy. So, he conceptualized these figures in general which means, it is worldwide phenomena that “men labor under mistakes,” that men labor for others while “other men were captive to their enterprise.”

This scenario had been recorded in his book “Slavery in Massachusetts” in which he made arguments about the complex contradiction between rich and poor and in the end he thought both slaves in their own way. At this point, he made his way to clearly redeem and redefine manhood. Manhood during his period he saw men in order to follow the trend had to compete against each other and to enjoy inequality in the world of capitalism and dissonance. On the other hand, transcendentalists view each person as infinite with emotion, intellect, creative, dynamic, subjective, imaginative, and visionary.

This means equality of rights and enjoyment of the blessings of God on earth. Thoreau experienced living alone in the woods just to realize how to live truly free and uncommitted to establish an original relationship with nature. There, he raised his own food, observed nature, and explored his inner self. In his book Walden, it is stated: “God himself culminates in the present moment…And we are enabled to apprehend at all what is sublime and noble only by the perpetual instilling and drenching of the reality that surrounds us.”

His Civil Disobedience July 1846 when Thoreau decided to go to town for a shoe repair, when he was arrested for not paying tax. As early as 1842 Thoreau refused from paying tax. In his statement he said, “I did not see why the schoolmaster should be taxed to support the priest and not the priest the schoolmaster…” Though, he was seen as a rebel for his refusal of paying his tax, yet for his contemporaries, it was a display of non-compromise, which is a sign of principle.

Because the underlying question in this action was “how are to respond to injury and evil? ” Thoreau in his book “Civil Resistance” evoked the existing positive meanings of resistance; for him, it does mean, in Ballou’s phrase, “resistance of injury with injury” In other’s opinion, his philosophy of non-violent reaction is avoidance of involving politics in the issue. His is enlightened liberalism- a close-minded and concerned with the individual conscience and not collective action.

As it is said, “Thoreau’s civil disobedience is the choice he makes when he has no choice but to act. ” Thoreau’s Last Event in His Life Throughout his lifetime, he devoted his time searching for natural philosophy and science. His book Walden had the details of natural facts that believed to be the foundation for his transcendental flights. His purpose is to integrate or use Science to support his idea of the philosophy. As a young boy, he used to recreate something for a change, for he saw beauty beyond something like changing the water wheel.

His life in the farm gave a lot of realization in life. The beauty that he saw being a sensitive observer found meaning and significance to every angle and function of the world. At this point would enter spiritualized self that communes into that microcosm. During his latter year, he became more systematic in his intellectual reorientation of factual details of his natural surroundings. He already developed mastery of a complex symbolic of visionary insights.

As David Robinson tried to emphasized, “Thoreau’s immersion in scientific study and his contribution to the science of his day must be emphasized, so must his ambivalence about this work, and his insistence that it has been within a larger framework of philosophical inquiry” After sometime in the Walden Pond, he decided to leave for he realized that he still had several more years to live. For him, it is a “necessary and positive gestures, the signs of an essential stance of openness to new experience. ” Thoreau’s life at the Walden Pond provided him the most productive period of his literary life.

While his new life outside the farm fulfilled his emotional need for companion. He continued living and died at age forty four due to tuberculosis in 1862. Conclusion Thoreau was just one of the many contributors of the modern transcendentalism but his ideology is closely associated with living simply in nature. His life experiences contributed to his ideology that made him preferred to live independently and alone for two years at the Walden Pond. Throughout his life, he devoted his time earning for a living and writing books, letters, poem, and stories that became a great source of knowledge about his view of transcendentalism.

In the process, Thoreau’s life and writings had been an instrument in the institution of some movements. For instance, since his ideology is associated with the masses or for the poor, it served an inspiration for political changed of socialist counties. There is a spiritual and social implication to that ideology; that countries like Bulgaria could relate to that especially his Civil Disobedience book. However, we could say that Thoreau’s approach is more on individual communion with God and nature for self-contentment.

Henry David Thoreau and His Contribution to Transcendentalism. (2016, Sep 07). Retrieved from https://studymoose.com/henry-david-thoreau-and-his-contribution-to-transcendentalism-essay?post 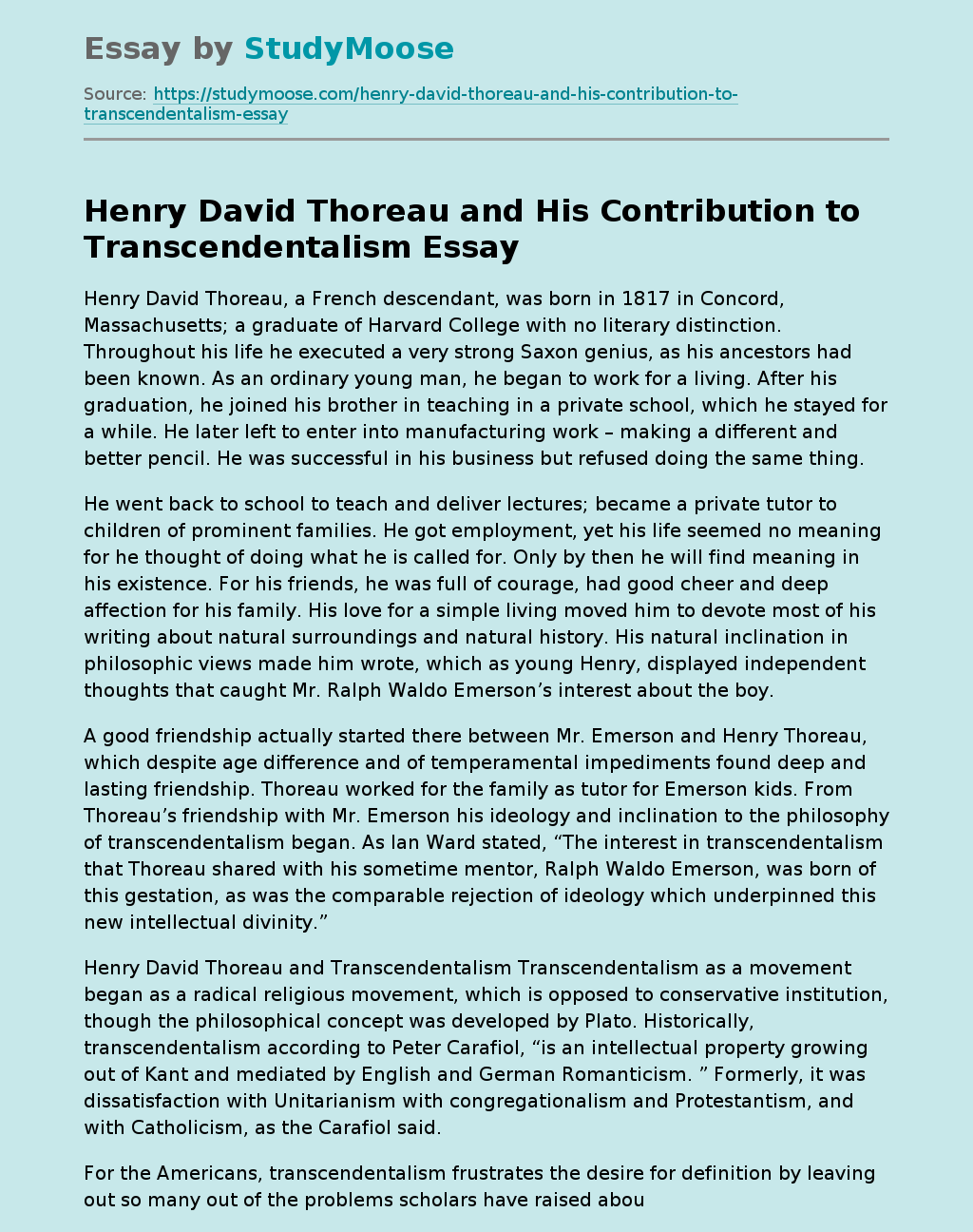