When watching the clip, I had noticed that Archie’s step dad was not allowed to enter the operating room or take part in the operation.

Don't use plagiarized sources.
Get Your Custom Essay on Health and social care unit 1 m1 criteria Just from $13,9/Page

They were wearing, face masks, aprons and head covers.

Personal Protective Equipment (PPE)
When watching the Holby City clip, I noticed that all medical staff were clothed accordingly, when operating on the child (Archie) and whilst preparing medicines and following procedures for the child in their care. Face masks, aprons and head covers were worn, to stop spread of germs, bacteria, illnesses or diseases. PPE is put in place in order to reduce the risks of cross contamination.

Security
During the Holby City clip, I noticed that all staff were wearing ID badges and that all doors were security coded. In also had noticed that all the patients notes were handled with care and not just left on the side. There was always a member of the medical tam holding on to the notes so that they were not seen by anybody who did not need to have a glimpse of the notes.

Legislations, laws, acts and regulations are put in place for all workplaces to abide by lawfully =. They are put into practice to protect all individuals.

Control of Substances Hazardous to Health (COSHH)
This regulation is put in place to ensure that any substances and chemicals are handled and disposed of correctly. In the Holby City clip, this regulation was breached. We see one of the nurse’s droop and mix up two different types of medications. The nurse did not act on the issue appropriately, which the later led to Archie’s death. The wrong medication was given to the patient, which meant that he was taking a lethal dose of the wrong medication.

If she reported the incident, she and the other medical staff could have acted accordingly; the medication would have been disposed of appropriately and then prepared again with caution. Then they could have found a way of then reducing the risk of happening again. This was an act of omission that she had committed. 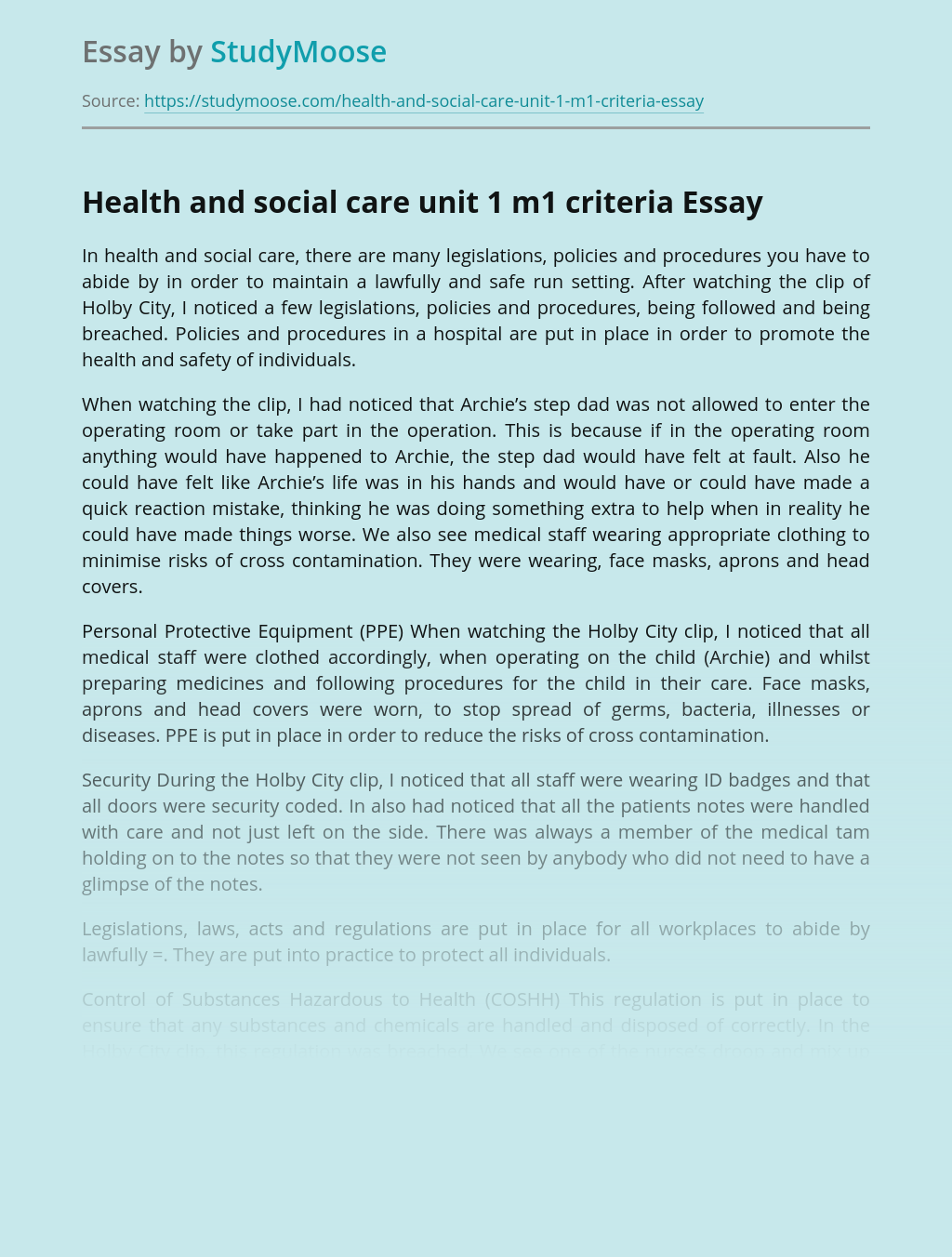 Nonprofit versus For-Profit Healthcare and Organizations

Abstract This paper explores articles and research conducted on nonprofit versus For-Profit Healthcare and Organizations. There are three types of entities that own hospitals, which are: nonprofit, for-profit, and government. However, it can’t be determined if they specialize in different medical services or how their service profits affect certain specializations. More than likely, the for-profits...

Tell me about your family values concerning health .What values are important to you when it comes to how to promotion health? How have these values influence your lifestyle as family. What are your family nutritional habits? Tell me how many serving of vegetable or fruits you eat per day? What kind of diet do...

Abstract This paper discusses and explains how I determined my chosen career field, healthcare administration. I began this paper by discussing the process of choosing not only what major you want to study, but what you will do with that degree once you graduate. I continue by discussing how and why I intend to aspire...