What is Good or Bad, Right or Wrong?

Distinguishing what is good from bad or telling apart a right deed from a wrong one has been said to be a matter of personal judgment and therefore choice. But one may ask: “What causes a person to make a particular choice or reach a certain judgment? ” The answer to this, according to pundits, is the person’s philosophical outlook. In other words, his or her ethical basis for distinguishing right and wrong which could be dictated by religious belief, cultural or ethnic background, and other personal circumstances.

Don't use plagiarized sources. Get your custom essay on
“ What is Good or Bad, Right or Wrong? ”
Get custom paper
NEW! smart matching with writer

Because of these differences in people’s moral values and principles, what is right for some people is often considered wrong by others. There are several philosophical positions which impact on people’s perceptions of right and wrong. One of these is “moral absolutism. ” According to this position, there are certain actions which are always morally right and morally wrong regardless of the circumstances involved. In other words, actions are inherently either right or wrong, no matter what conditions surround the actions.

A classic case in point is Immanuel Kant’s position regarding lying. He wrote in his “On a Supposed Right to Lie” that one should always be truthful even in answering the question of a murderer who wants to know if his or her intended victim is in the house. In spite of the fact that the intended victim might meet his or her death if his or her presence in the house is revealed to the murderer, Kant insisted that one has no right to lie because lying is inherently wrong.

Another instance of moral absolutism could be found in the “United Nations Convention against Torture and Other Cruel, Inhuman or Degrading Treatment or Punishment” published in 1987. This document maintained that the use of torture could never be justified under any situation. Critics of the convention interpreted this provision to mean that even if a terrorist bomb is about to explode and the terrorist responsible for planting the bomb is already under the custody of police authorities, this captured terrorist should not be subjected to torture to force him or her to reveal where the bomb is being concealed.

This declaration is an outright absolutism because it does not take into consideration the lives that could be lost when the bomb finally explodes (Lau & Chan-a). Moral absolutism is likewise articulated in deontological concepts. These concepts categorize actions as inherently good or bad. The “Natural Moral Law” is one deontological theory which states that an action is either good or bad depending upon the laws of God and nature.

In other words, once an action has been categorized as morally evil under the laws of God embodied in the teachings of the Roman Catholic Church, such action could no longer be considered good under any circumstances. One specific example of this situation is the Roman Catholic belief that abortion is wicked and immoral because it is an act of murder, thus, a violation of the Ten Commandments of God. For this reason, according to Roman Catholics, no circumstance could possibly mitigate or justify the immorality of abortion, in the same way that murder could never be a justifiable offense.

That is, even if pregnancy endangers the life of the mother, abortion remains a no-no (Rowie). Christian fundamentalists are moral absolutists who depend on “God’s revealed and unchanging law” to guide them in their daily ethical dilemmas. They claim that the answers to life’s ethical problems could only be found in the Bible. They stress that the Bible should be literally interpreted, not taken up figuratively or any other way, because it is “the word of God” (Hamerlinck).

The principle of human rights, on the other hand, is considered a modern version of moral absolutism because of its unyielding contention that any action or belief which violates anybody’s basic human rights could never be regarded as morally good. While the Roman Catholics and other Christian fundamentalists base their moral judgment on the “word of God,” human rights moralists consider the basic rights of man as the only measure for what is right and wrong (Rowie). For “moral contextualism,” however, no action is inherently right or wrong.

Instead, this position maintains that an action could only be judged to be right or wrong after the situation has been carefully considered. In other words, an action such as abortion, which is considered morally wrong by moral absolutists, could be right in another context, such as in a case involving ectopic pregnancy where the fetus which develops in the fallopian tube of the mother could very likely result to the death of the latter. In the case of Kant’s absolutist stance on lying, moral contextualism dictates that one ought to lie to the murderer in order to save the life of the intended victim.

In contrast, however, this philosophical position believes that lying on the part of government officials is morally wrong since it is considered corruption which is an act of dishonesty for personal profit. Moral contextualism, therefore, argues that “morality is not black and white” and the rightness or wrongness of an action should instead be judged within the context where such action is made (Lau & Chan-a). Aside from “moral absolutism” and “moral contextualism,” there is a third position. “Moral relativism” argues that the basis for what is right and wrong is relative to individuals and societies.

The former is called “ethical subjectivism” while the latter is referred to as “cultural relativism. ” According to this concept, there are no moral absolutes and that good or bad and right or wrong always depends upon the individual or the cultural group involved. In other words, an action could be considered good by one person but another might say that it is bad. One cultural group could be found doing one thing because it finds it good for its members while in another culture such a practice is considered with repugnance (moral relativism.info).

An example of a cultural practice which falls under “cultural relativism” is “clitoridectomy. ” This is a ritualistic act of mutilating the sexual organ of young girls which had been common in several African, Middle Eastern and Asian countries to maintain the chastity of women before they get married. In the western world, this practice is considered brutal, grossly inhuman, hazardous to health, and totally immoral (Fichner-Rathus). 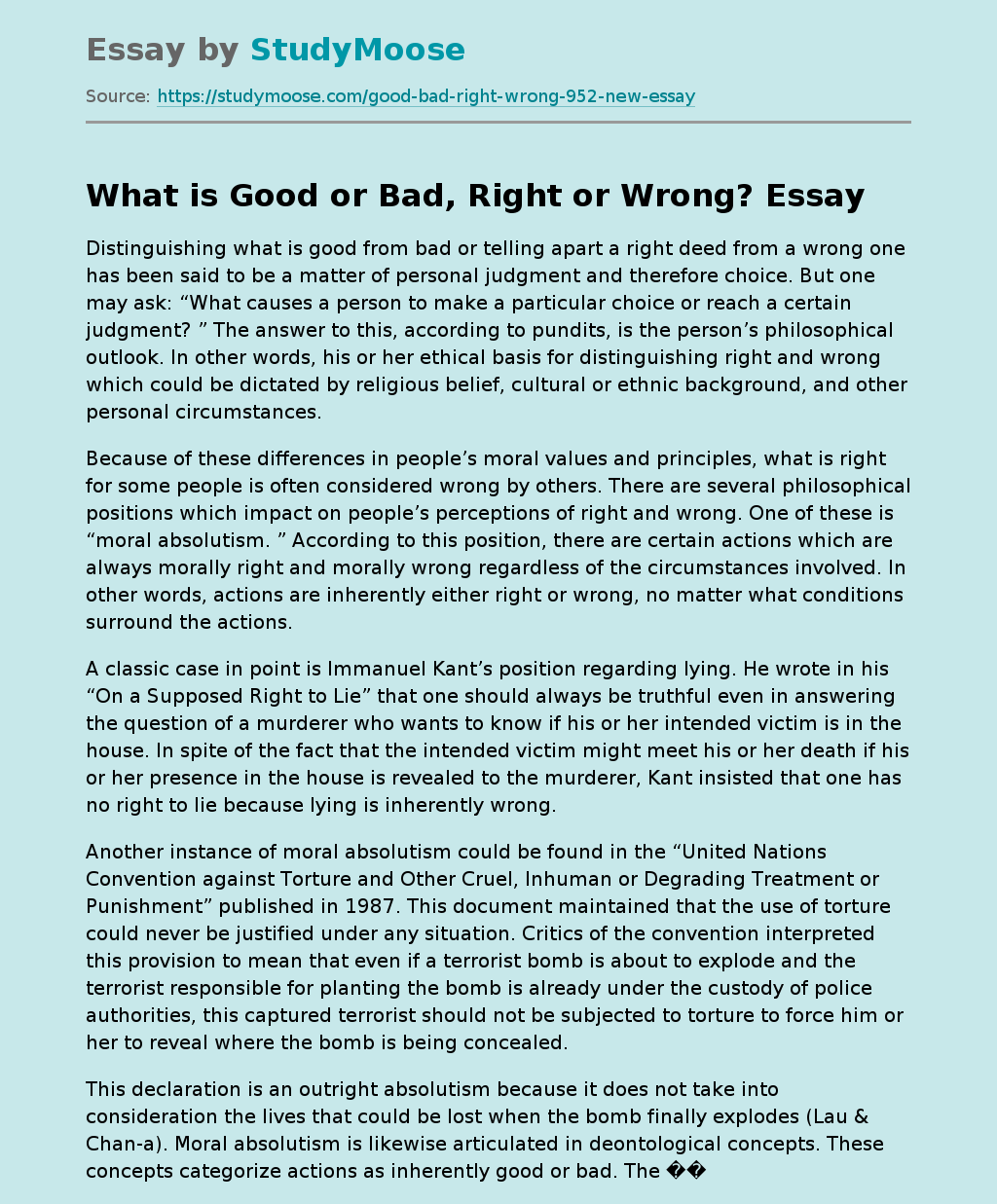