The Geography of Travel and Tourism - Summative Assignment

Djibouti is a late 19th century city with a distinctly Arabic feel. It boarders the Gulf of Aden and the Red Sea between Eritrea and Somalia with a total area coverage of 23,000 sq km. Attractions include the lively central market (Le Marche Central) which is located near the Mosque, and many local bars and restaurants, also worth seeing is the tropical aquarium which has exhibits from the red sea and is open daily. Djibouti lies within a geological feature known as the Afar Triangle, which is one of the hottest and most desolate places on Earth.

Don't use plagiarized sources. Get your custom essay on
“ The Geography of Travel and Tourism – Summative Assignment ”
Get custom paper
NEW! smart matching with writer

Its part of the Great Rift Valley system and it is a wedge of flat dessert pushing into the Ethiopian Massif. The country has one of the lowest points on the planet, Lake Assal which is 60 miles to the South West of Djibouti City and sits at 570ft below sea level. The country’s official languages are Arabic and French although English is spoken by hoteliers, taxi drivers and traders.

The governments prime minister is Mohamed Dileita he has been in power since 2001 and was chosen by the people of Djibouti. Since the country gained independence in 1977 there are still many French themes for example clothing and French food delicacies.

Djibouti isn’t known for its mass tourist attractions, its economy is based on service activities connected with the country’s location and status as a free trade zone in northeast Africa. Djibouti provides services as both a transit port, a international transhipment and refuelling centre, Djibouti has very few natural resources and little industry which is why it is therefore dependent on foreign assistance to help support its balance of payments and to finance development projects.

As the country does not have expendable income to use on tourist resorts or attractions to draw people in it is seen as a third world country with very little to offer. The unemployment rate is around 50% which doesn’t help towards bettering the country as there is very little work on offer but what work there is, it is heavily underpaid. The government has fallen into arrears with long term external debt, repayments

which were promised have not been paid due to the lack of internal income.

The country’s GDP growth rate in 2004 was 0.8% which is due to lack of external income as well as internal due to the agricultural, industrial and services industries failing by on average -3.4%.

Over the years there has been many causes for the country’s depression and lack of tourists, some of the major issues which were of a concern was the civil war, the recession which has been going on for the last seven years, the natural hazards which the country suffers from such as earthquakes, drought and occasional cyclonic disturbances from the Indian ocean which bring heavy rain and floods. The inadequate supplies of water and the limited area for arable farming which has been affected over the years by the atmospheric changes has also endangered wildlife which before may have been a selling point to external tourists.

There are very little technological advances with in the country, for example it doesn’t have a water or electricity supply to all areas and most constituencies are dry, powerless villages with little form of communication to the outside world.

The total electricity consumption for the year averages around 167.4 million k Wh which in comparison to the United Kingdom which is of the same size (25, 926 sq km) nearly 337,400,000,000 k Wh can be produced each year by numerous nuclear power stations around the country which generates power to on average 60 million people, as well in comparison Djibouti’s growth rate is an estimated 3% each year in comparison to the UK brining in one and a half billion us dollars since 2001 which has increased on average 2% each year.

All facts and figures were taken from www.nationalgrid.co.uk, www.africa.com/Djibouti and East Africa 2nd edition by trade and travel handbooks.

The country’s physical and cultural resources which attract people are sporting activities such as swimming, snorkelling and underwater photography, places like Ghoubet al Kharab and the Gulf of Tadjoura which contains many species of fish and coral are ideal places for such activities. Geology and wildlife explorers visit Lake Abbe where you can always see a gathering of flamingos and pelicans and the location of natural steaming chimneys.

One of the main events in Djibouti’s calendar is it independence day which falls on the 27th of June and was established in 1977, the country was originally governed by France and was named French Somaliland but was then changed to French territory of the Afars and the Issas in 1967, the country has always been at war with its self either religion or Afar rebels being the main cause. The last civil war which was led by the Afar rebels in the early 1990’s was stopped by a peace accord in 1994.

The East African trade & travel handbook states that the indigenous population of Djibouti is evenly divided between the Issa who are of Somali origin and mainly occupy the south part of the country and the Afar who live in the north of the country, both groups are Muslim Cushitic speaking and are of a Nomadic culture with close cultural affinities despite frequent rivalry.

Djibouti’s infrastructure isn’t as intact as you would find in other surrounding country’s, its rail and road systems link up with other boarding country’s but has little funding each year to improve its ability and safeness, its known as the Djibouti-Ethiopian railway which provides a regular service from Addis Ababa and Dire Dawa to the capital. The airport does not employ huge numbers of staff unlike other airports in Africa and is mainly used by the Red Cross or military for bringing in aid or shipments from other EU country’s. There is also a small charted plane which is under contract with the Aero club within the airport.

Tourism always affects a country in a negative or positive way, the main causes for these affects are down to the number of visitors passing through each year, for example if a well developed tourist destination which commonly has ten million visitors each year and were the back bone of the economy can also have a devastating affect if for either a natural or man made cause stopped them from visiting and cut the average by half then this will have halved the income and can possibly cripple a society.

Visitors to an established economy can bring with them many negative drawbacks, some of which can have long lasting effects not only on the people of an area but on wildlife as well. Visitors to an area use local resources which can increase pollution such as litter, air, noise and sewage. Air pollution can corrode buildings and damage statues and monuments which may be hundreds of years old, noise pollution is quite a common issue especially with in the last ten to fifteen years, islands in Spain and Greece which have become popular amongst younger generations have seen great increases in pollution as millions of visitors which is increasing each year damage these beautiful islands which were once tranquil. Djibouti doesn’t fall into the more known problem areas, its personally been suffering from depression and civil war for the last decade, which has driven away tourists.

The main travellers to this country are from people passing through to either Somalia, Eritrea, Ethiopia or using the country as a gateway to the rest of the Mediterranean. Visitors can destroy natural habitats, as tourism demands increase so does the demand for new hotels, restaurants and attractions. Djibouti’s main problem is that it is so far in debt it can not afford to build such developments which results in the country offering very little to tourists. Even if its debt problem was consolidated with the other European countries it does not have enough income to start developing its tourism attractions, the country’s main concern is to connect water and electricity supply’s to all its suburbs, to build accommodation and to multiply its annual harvest by investing in better farming equipment.

Djibouti is a African country but with a French/Arabic twist, it has some beautiful coast lines which link up with the warm Mediterranean waters and its lake and river systems connect with one of the longest rivers in the world and although the country has and is still going through turmoil it is still an exciting place to visit, if for only its links with the red sea or its river system which has some of the most beautiful species of fish in the world.

Djibouti has come on along way over the last one hundred years, not only has the people of Djibouti gained independence from France and created their own government but they have also managed to create peace with them selves after years of civil war. Tourism has never been a strong point for the area but in time it will grow stronger with wildlife recovering from years of unsettlement, the return of local traditions with the help of independence this country is definitely one of Africa’s secrets.

The Geography of Travel and Tourism - Summative Assignment. (2020, Jun 02). Retrieved from https://studymoose.com/geography-travel-tourism-summative-assignment-new-essay 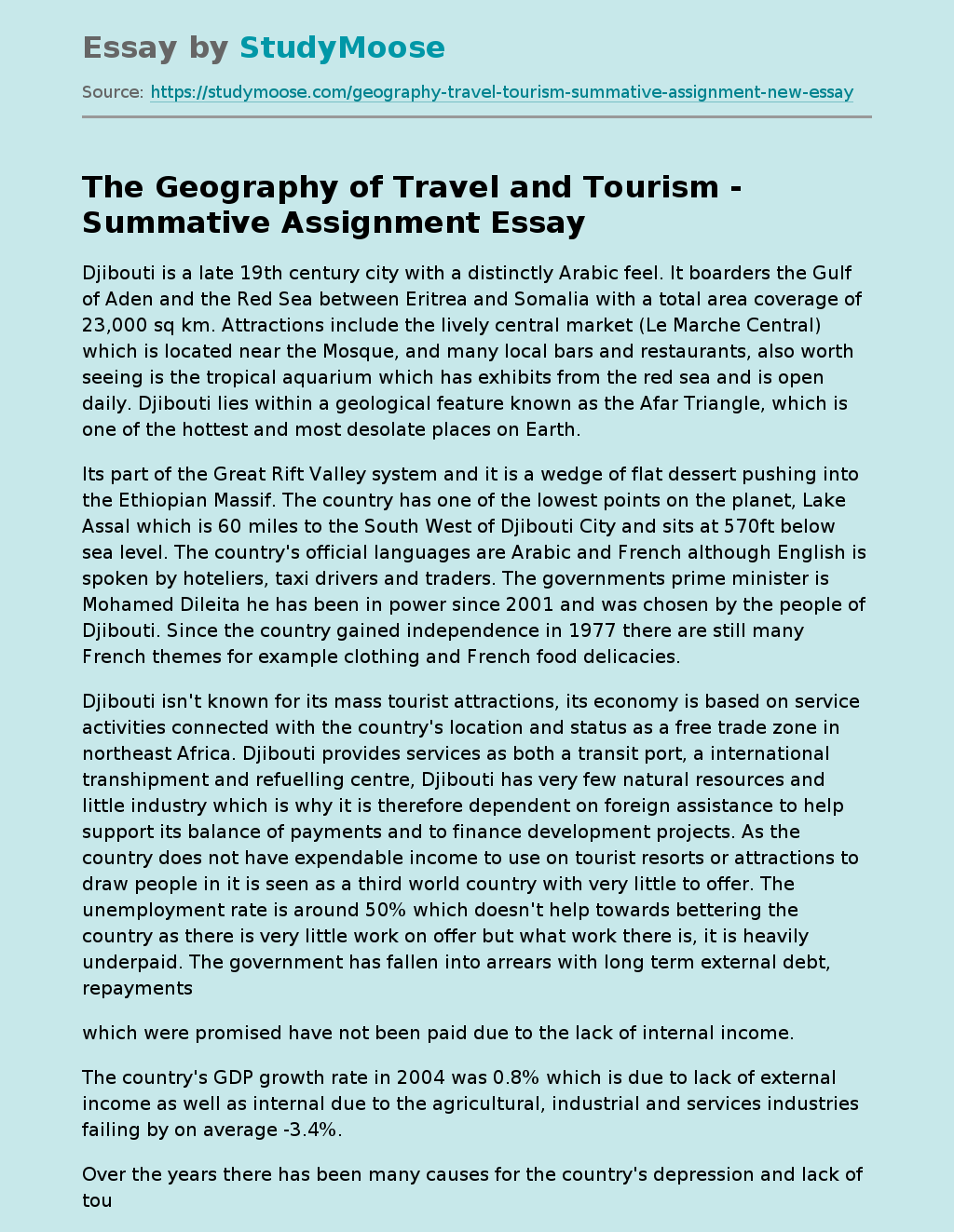