Genghis Khan, The Conqueror and Leader

The Conqueror and Leader of The Modern World

Genghis Khan was a man of great stature, which came on throughout the years. From being a Military Conqueror to be a leader in his time really made Khan’s name very popular. Khan was undefeated in his time, not only because of his army of thousands, but also because of his fearless demeanor and his courage to conqueror.

Genghis Khan was a powerful leader that chose to lead his people into his newly conquered city of Bukhara.

Don't use plagiarized sources. Get your custom essay on
“ Genghis Khan, The Conqueror and Leader ”
Get custom paper
NEW! smart matching with writer

(3) Khan eventually let everyone around him know who he was and what he was about. Khan’s attack came upon due to the provoking of the sultan of Khwarizm, who made a fatal attack and made Khan upset. The sultan looted a Mongol caravan and disfigured the faces of Mongol ambassadors, and then sent their people to negotiate peaceful commerce. (4) This single move alone grew tension between Khan and the sultan. Upon entering the city of Bukhara, Khan made one of his most powerful secret attacks in military history that left everybody thinking about how they could defeat a man this clever and smooth.

Khan and his army of thousands choose not to draw any attention to themselves by traveling on one of the coldest days of the month across the desert. (4) A move that clever was just what Khan needed so no one would be suspicious of his clever moves and his quick-thinking skills. This was his most silent move ever for a man that did not like a lot of attention.

Instead of transporting slow moving siege engines and heavy equipment with them , Khan’s army decided to build whatever they needed when they reached their destination. They cut down trees and used was needed along the way to build their equipment and ammo. (4) Genghis Khan quickly came to the conclusion that this was no sporting contest but merely a commitment of one people against another. (8)

Khan believed that God sent him to punish those who committed the greatest sins. If you had not committed the greatest sins God would not have sent a punishment like me upon you.(7) Temujin, also known as Genghis Khan was married to a lady name Borte, who was captured by some of his rivals and apparently raped by one of the capturers.(36) Temujin and Borte reunited and she gave birth to her eldest son who drew suspicion upon Borte. (36) Khan named the boy Jochi which meant visitor, or guest this really made Temujin (Khan) upset. Khan used his own methods of communication in which he never uttered a word, this included the use of torches, whistling arrows, smoke, flares, and flags. (72)

Khan was about 60 years old and yet he was determined to conqueror as many cities, towns, and armies that he could. Genghis Khan was not taught to fight properly, nor did he go to any special schools for it, he had to learn day by day and hour by hour. Khan’s mass manipulating skills was the master mind behind all his attacks in which he was undefeated. Genghis Khan’s leadership was the main thing that made his most vicious rivals try to do whatever in their power to defeat him. Khan who was also known as Temujin in his younger years had a mentality to get what and who he wanted made him come to the conclusion that his once childhood friend Jamuka who he had fought for more than 20 years was, and whom people he had executed due to the mere fact that they had betrayed him by bringing him to Temujin that they were just friends trying to defeat their own territories. It was during their final meeting that Temujin convinced Khan that they should reunite and become companions. (63) Genghis Khan would often let his captives, and his enemies know that it was God’s will for him to conqueror many territories. It is the will of God that we take the earth and maintain order. (111)

Genghis Khan and The Mongols captured, killed, and did whatever was necessary to gain as many people, and countries as they could overtake. Age, ethnicity, or gender did not matter to Khan or his Mongols, whether they were male, female, old, or young he captured them all. (111) Genghis Khan and his army never had time to fear anyone, because he was willing to fight no matter the consequences. Being victorious was all Khan thought of, and many who knew that they couldn’t defeat Khan and his army surrendered and joined Khan’s army and those who didn’t join them would suffer tremendously. Genghis Khan had people stuck in their cities due to his fighting and capturing. The people fought, died, and starved, and among all the fighting, the bodies continuously fell and were used for a number of things like covering pot holes, making paths in the road, and most of all as nourishment to others. This kind of nourishment was called cannibalism in which the people ate of the dead bodies to survive. (93) Life in Khan’s days were rough, and harsh, but when you want it all you must make sacrifices such as the ones Khan and his people made.Many years passed and now Khan had a bigger problem on his hands.

The mere fact that he knew he was going to expire one day and he needed to know that he had placed his son’s in place to be rulers over each of his many conquered territories. Khan relied on his people to nominate which son would conquer which territory, and which son would be the Great Khan Leader in which he would follow his footsteps. Before Khan’s death he had to agree that he accepted his eldest son Jochi as his own in order for his other sons to acknowledge him as their brother. (120) Upon Genghis Khan’s death his sons were now going to carry on his Legacy. Khan’s sons had to come to the agreement to lead and conquer in the same way as their father. Khan’s sons were all types of out of the ordinary in which they kind of shamed their family name. Khan’s son Ogodei never understood how someone could defeat anyone on horseback like his father did.

Genghis Khan, The Conqueror and Leader. (2019, Aug 20). Retrieved from https://studymoose.com/genghis-khan-the-conqueror-and-leader-essay 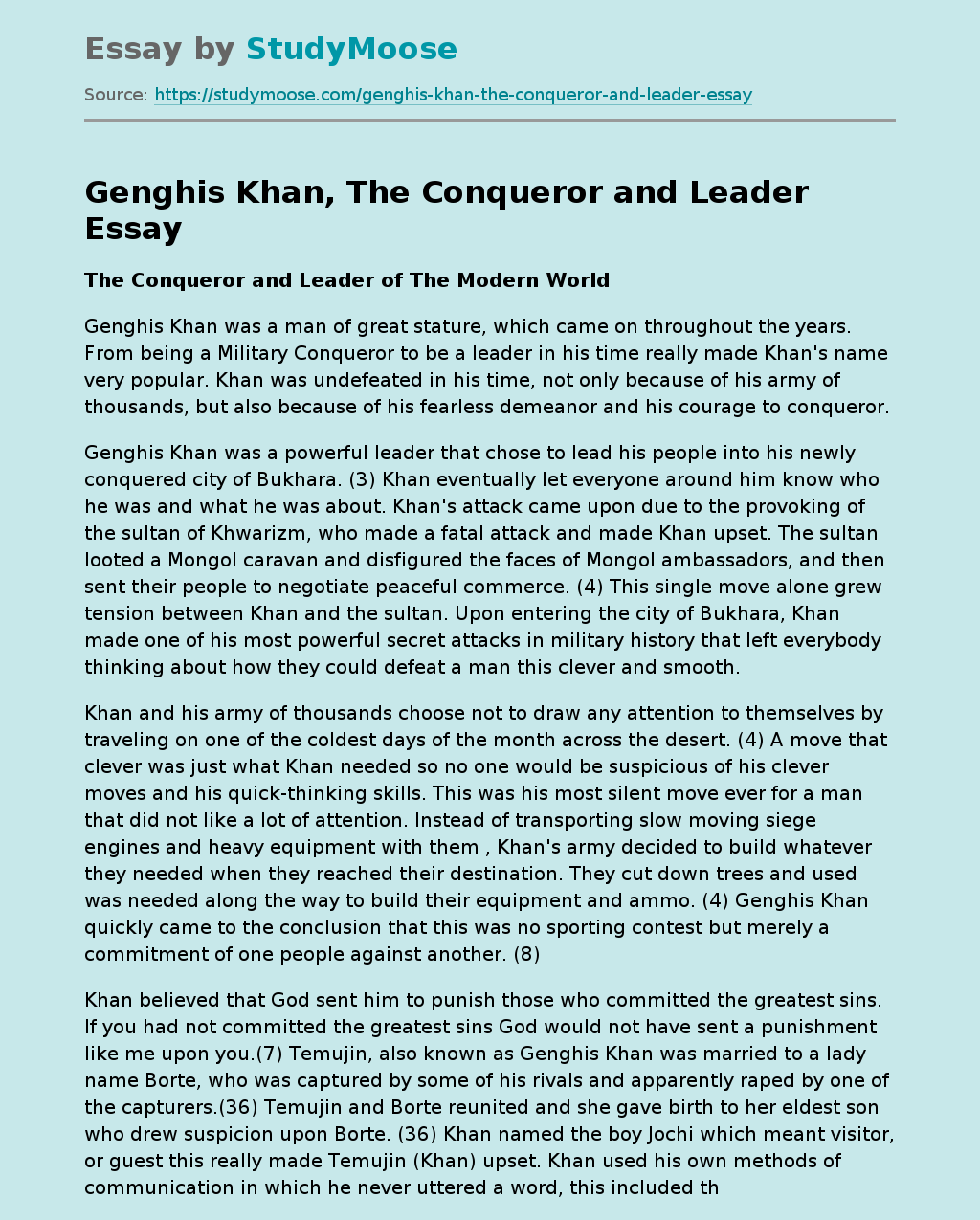