Life styles, rapid changes in Science and Technology has transformed our outlook towards life, increasing the divide, much more than it has ever happened in the past. The divide has always been there but never before has it been so wide.

Life style changes with the passage of time and with a changing life style, attitudes and values also undergo a transformation. No two generations have shared the same views and options. However, there has never been a greater divide between two generations than in modern times.

Don't use plagiarized sources. Get your custom essay on
“ Generation Gap Definition ”
Get custom paper
NEW! smart matching with writer

With rapid changes in science and technology, the exposure, which today’s teenager is getting, is enormous. Value systems have gradually degenerated and the youth is assimilating a new culture. The result is confused parents who are unable to reconcile with the views of their children.

There is a great divide between the perception of both, the young people and the adults. One finds that both are unable to communicate with each other, quite often.

One of the reasons could be that neither knows what the other is interested in though they may be living under the same roof.

Generation gap is not only reflected in the choice of dresses but also in music, opinions and other behavior patterns.

The younger generation which has acquired a different set of values rebels against the older generation as they wish to impose their own value system on them.

They resist this forceful intrusion as they are unable to reconcile with the thought of accepting what they think has become outdated. The parent’s displeasure is obviously natural as it is a defiance of their authority and the right way to lead one’s life. Parents fail to realize that the wheel of change irreversible and those, who do not move with it, tend to become disillusion aggravating conflict.

The kids are moving much faster on the technologic track, as well as in daily life, than the parents. Children, today, are capable using complicated gadgets and this phenomenon of superior knowledge children as compared to adults has never happened as much as now in 13 societies. The conflict arises when adults stick to their old ways and refuse accept any change while the world rapidly moves ahead.

In short, Generation Gap is nothing but the resistance in adults to adapt| change – They forget that the only thing constant in life is ‘change’. The realization requires a lot of patience and understanding of change perceptions.

The adults need to look back, introspect and think also the differences they had with their parents. No doubt, memory is she lived and one tends to
forget the past which they are fond of referring to ‘Good old days’, where they as children were obedient, respectful 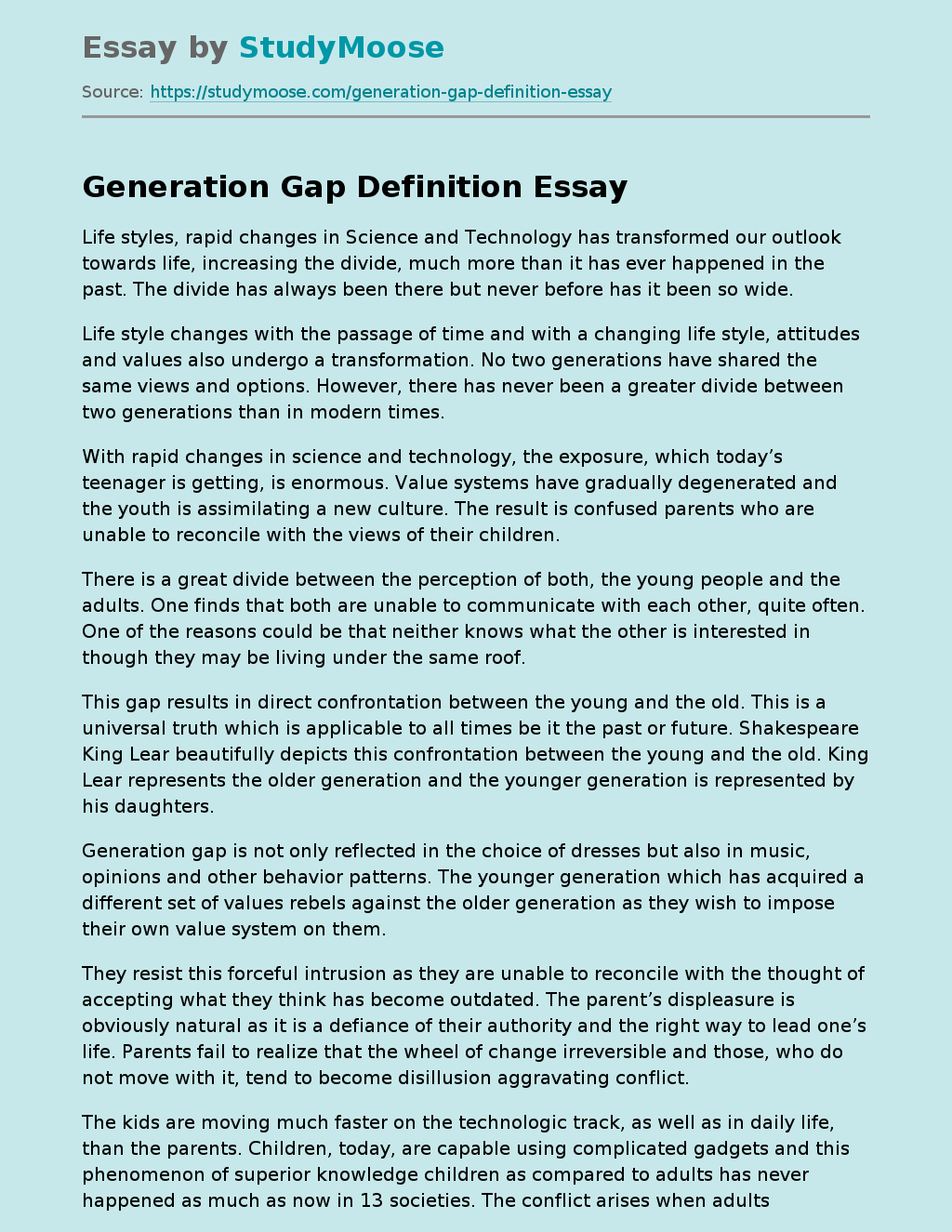