From the time we are born, we are placed into two distinct categories: Boy or Girl. Not by choice, but by genetics and what some would consider fate and there is no in between, no blurred lines. With the society that we live in today, there is a solidified stereotype placed on both men and women. This stereotype is known as Gender Roles. Gender roles often known as a “sex role” is a social role encompassing a range of societal norms that dictate what type of behaviors are considered acceptable and appropriate based on ones perceived sex.

Don't use plagiarized sources. Get your custom essay on
“ Gender Roles in Society Today ”
Get custom paper
NEW! smart matching with writer

From a young age, children can classify themselves by gender and have to ability to differentiate “boy activities” from “girl activities.” These gender specific stereotypes are something which we were taught even before our adolescent years, following us into our adult lives subconsciously dictating the world around us.

In recent discussions of gender roles in our society, a controversial issue has been whether the stereotypes of feminine and masculine qualities determine who is the “man” and who is the “woman” in a relationship.

More specifically in same-sex relationships. On the one hand, some argue that there is no issue with categorizing an individual into a gender category based on their qualities and or sex. From this perspective, this point of view is suppressive to the way gender roles have changed and adapted in our society today. On the other hand, however, others argue that the stereotypes surrounding the topic of gender roles have created inequalities in different aspects of people’s lives.

In the words of Stephen Mays, a multi-media editor, wrote an article for an independent student-run newspaper in 2013 geared towards University of Georgia students writes “What About Gender Roles in Same-Sex Relationships,” one of this view’s main proponents, “A gay man may show effeminate qualities, but that doesn’t make him the “woman” of the relationship. Just like the muscled, bearded gay man doesn’t have to be the “man” of the relationship.” According to this view, qualities possessed by and individual does not determine the role they play in a relationship, or society. In sum, then, the issue is whether gender roles have created inequalities for both men and women, or are these stereotypes placed rightfully so.

My own view is that there should not be certain qualities about an individual that determines whether they are more masculine or feminine. Though I concede that for years we have been taught through school and knowledge passed on to us, as to what activities and qualities are for men and women, I still maintain that these assumed roles place a strain on the constant progression towards equality today. For example, according to studies, increases have been shown for women who are obtaining more prominent careers, while fathers of families have taken on the role of staying home and assuming the primary caregiver position. Although some might object that there have been changes in the fairness between men and women in the workplace, I would reply that there is still progress that can be made regarding this topic. The issue is important because with the changes in our society, there also needs to be change of people’s perception of the roles of gender and what they mean and how one cannot be placed into a singular category based on their qualities.

When it comes to homosexual relationships as opposed to heterosexual relationships, one might say that upon observing a heterosexual relationship that it is obvious to determine who is the male and female of the relationship. So how does this work for same-sex relationships? This question is directly aligned with the topic of gender roles. In a same-sex male relationships to be more specific, the relationship is composed of two men. However, outside observers have questioned who assumes which roles in their relationship without considering the bigger picture; why must there be an assumed role in the first place? This leads me to believe we have been taught that there must be an either or, not equal. Consider two men in a relationship; one that enjoys sports activities and works for a fortune 500 company, the other enjoys shopping and cooking. Most would assume that the man who cooks and enjoys shopping would be considered the “woman” of the relationship. This perspective in my opinion sets us back as an entire society for all that we have worked for toward progression in equality for all.

Throughout history men and women have been charged with certain individual functions. However, the 21st century has been a shift in gender roles due to several changing factors such as new family structures and women furthering their education and obtaining higher positions in the labor force. I believe that gender role equality allows gender qualities to become more neutral and according to Donnalyn Pompper, a Professor and Endowed chair in Public Relations, School of Journalism & communication, and the University of Oregon teaches courses and researches in social responsibility and social identity, claims that is the reason “men no longer own breadwinning identities, and like women, their bodies are objectified in mass media images.” This example extenuates the idea that the high-profile careers are no longer just for men and staying at home raising children is not something that is just for women.

For example, Richard Dorment, senior editor at Wired magazine and Esquire magazine writes an essay in 2013 called “Why Men Still Can’t Have It All.” He believes in similar values as Anne-Marie Slaughter, but from the perspective of men and fathers. Dorment expresses his disappointment in the stereotypical view in which we automatically see staying home and putting the care of your children first as more of a women’s role. The author explains that he made the conscious decision to stay at home and take care of their children and household responsibilities, while this gave his wife to further pursue her desired job opportunities. He claims that based on this decision, others may view him as not living up to his “manly” expectations, which falls under the stereotype that men, and men only are the sole breadwinners in their household. He opposes this opinion others have of him. May’s explains that this puts men and fathers at a disadvantage, suggesting that men don’t enjoy spending as much time with their families as women do. I believe Dorment makes a convincing argument that not only do women feel they cannot have it all, men also share the burden of feeling unsatisfied because of the stereotypes placed upon gender specific roles.

Anne-Marie Slaughter, president and CEO of the New America Foundation, professor of Princeton University and Harvard Law School writes “Why Women Still Can’t Have It All.” Through this article Slaughter explains that she has the successful career that she’s spent most of her life working toward, yet she still feels a sense of something missing. Slaughter further justifies this feeling by explaining that the position she currently holds takes away from the time she’s able to spend with her husband and two sons. She then makes the decisions to resign from her position to allow her the freedom to be more attentive to her home life, though it was frowned upon by colleagues considering that she was a woman in a career mainly dominated by men and that she should stay. This article presents the idea that gender roles are so predominant, that both men and women feel like they are not allowed the decision regarding their family and work dynamic that will ultimately satisfy them because of this idea of gender roles that they must maintain. This reading, coaligned with others regarding this topic, both address the issues men and women face when it comes to fulfilling their roles according to the standard of society.

Raynard Kington, president of Grinnell College in Iowa, former director at the National Institute of Health and the Centers for Disease Control and Prevention writes an article in 2013 aimed towards the general population. This was featured in the Washington Post titled “I’m Gay and African American. As a Dad, I Stille Have It Easier Than Working Moms.” Through this article Kington refers to the time it was announced that he would become the 13th president of Grinnell College. As he was making his speech he was interrupted by his youngest son, during that moment Kington couldn’t help but wonder upon receiving praise for exposing his fatherly side, that if a woman would have got the same reaction. Kington couldn’t help but feel that even with all the societal norms of a gay, African American man, that he somehow still managed to equate to more than women in our society. Furthermore, Kington recalls back to 50 years ago when he could remember his mother quitting a job that she loved to raise him and his four siblings. When Kington would ask why she quit something she loved, she explains that nurturing her children for success in the future was more important, this being a priority lead his mother to quit her job, allowing his father to continue working while she became a full-time mother. This article is important for my paper because it is another contributing argument that gender is a heavy determination on what choices are considered acceptable for men and women. It further proves that gender roles do more harm than good, and more often women are forced into making decisions that society expects of them rather than continuing to live a life that is fulfilling to them.

In conclusion, the idea that a person’s sex determines what role they play in the world and how their personal traits define them as a specific gender is completely irrelevant in our modern society today. With the progress we are making, gender roles are no longer necessary because both men and women can do the same necessary tasks therefor making gender specific behaviors and traits irrelevant. In the long run these stereotypes can be detrimental to an individual’s development. The current stereotypes places on men and women could potentially condemn and oppress a person that does not fit into the traditional definition of gender roles. It is critical that we encourage one another to live and express their true-selves regardless of what our society believes is gender appropriate, so that in the end everyone can contribute to our society to their full potential. 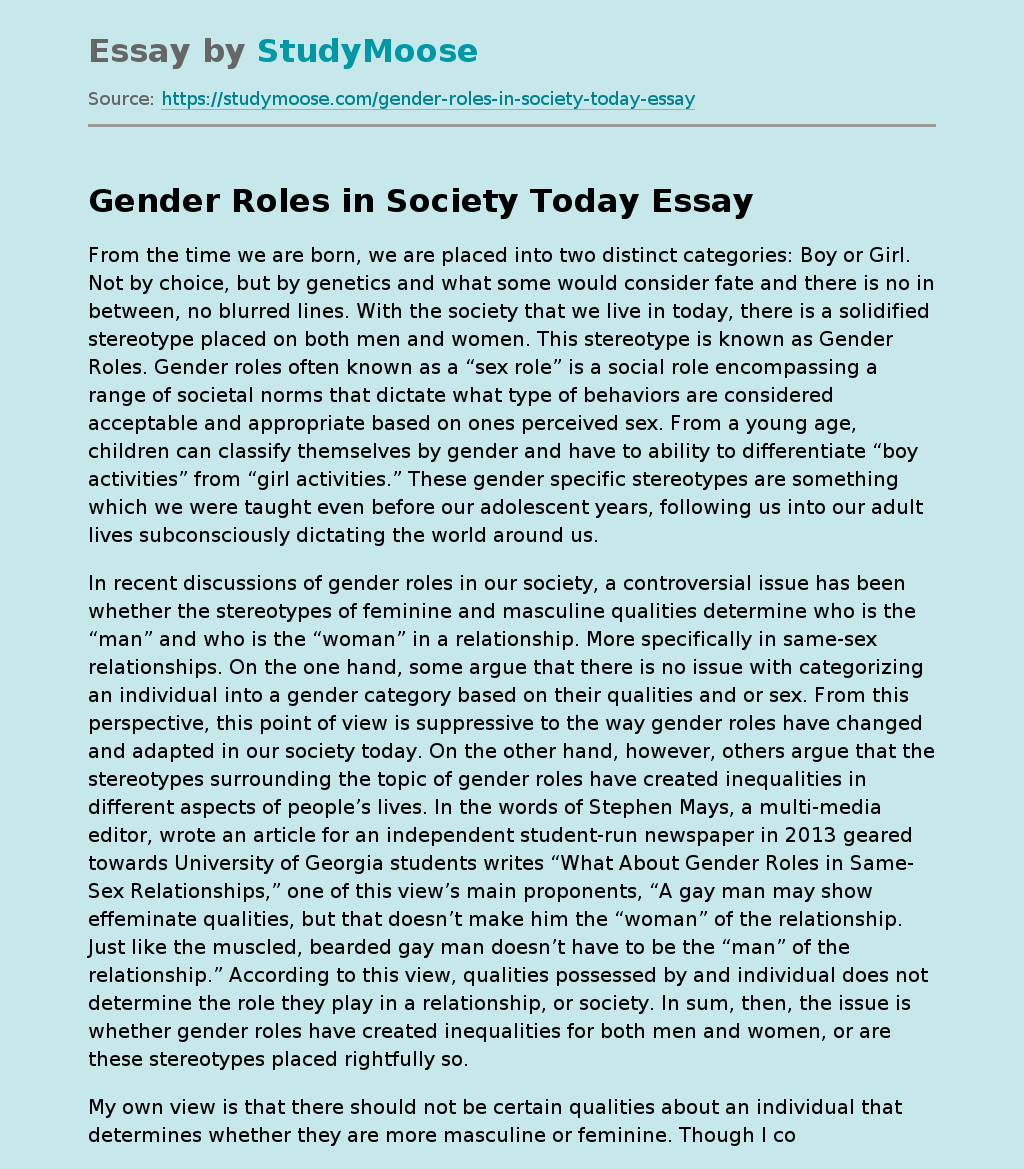