Gender Inequality is a Huge Issue From Past

In society, the roles and responsibilities of women and men are socially determined and it is called ‘gender’. The phenomenon of gender varies from society to society in different times. It is certain that gender inequality is a huge issue from past to present especially occurs among women. The beliefs and cultural values adopted by society may lead to inequality among individuals as a result women are the most affected by the inequality. Almost every stage of the life education, health, businesswomen are restricted and having struggle.

Don't use plagiarized sources. Get your custom essay on
“ Gender Inequality is a Huge Issue From Past ”
Get custom paper
NEW! smart matching with writer

This research is important to identify the underlying causes of gender differences and then It is important to reach the equality between men and women by guereenting the women’s right and provide them enough resources and oppurtunities to reach their full-potential. The relationship between culture and gender gap is not the topic that have been done to researched, there are several hypothesis about which dimension effect and how the gender gap and it is not certain that all dimensions are related to gender inequality.

Consequently the main focus of this literature review is examine to what extent do cultural dimensions of egalitarianism, embeddedness and hierarcy influences gender equality among women.

Many studies in the relationship between men and women proved that Hofstede’s and Schwartz’s cultural dimensions influences gender differences between men and women. However it can not strictly said that gender equality/inequality influenced by these cultural dimensions. Hofstede(1980) divided culture into five which are individualism/collectivism, high/low power distance, masculinity/femininty, high/low uncertainty avoidance and long term orientation while Schwartz(2006) categorized culture into mastery versus harmony, hierarchy versus egalitarianism, and embeddedness versus autonomy.

According to Schwartz(2006) in embedded cultures intergroup solidatary and social relationships are prior. In egalitarianism cultures equality in every area is respected and everyone’s welfare is prior.In hierarchical cultures power and sources do not distributed equally and authority is important. Hofstede(1980) defines power distance as the degree to which the lower ranking individuals of institutions and organisations within a country expect and accept that power is distributed unequally. He defines individualism is the idea that individual’s life belongs to him and to pursue the values of his choosing while he defines collectivism is the idea that individual’s life does not belongs to him but to the group or society that he belongs and that he pursue the goals for group that he belonged. Moreover according to him in masculine cultures task accomplishment is more important while having fun is more valuable than the task accomplishment in feminine cultures.According to Yeganeh and May(2011) Hofstede’s ‘’masculinity’’ dimension and Schwartz’s ‘’mastery’’ dimension are similar while femininity and harmony is similar. Additionally authors state that Schwartz’s “hierarchy” dimension correspond Hofstede’s (1980) “power distance dimension, autonomy dimension similar to Hofstede’s individualism dimension and “conservatism” similar to “collectivism’’.

Gender Inequality is a Huge Issue From Past. (2021, Feb 03). Retrieved from http://studymoose.com/gender-inequality-is-a-huge-issue-from-past-essay 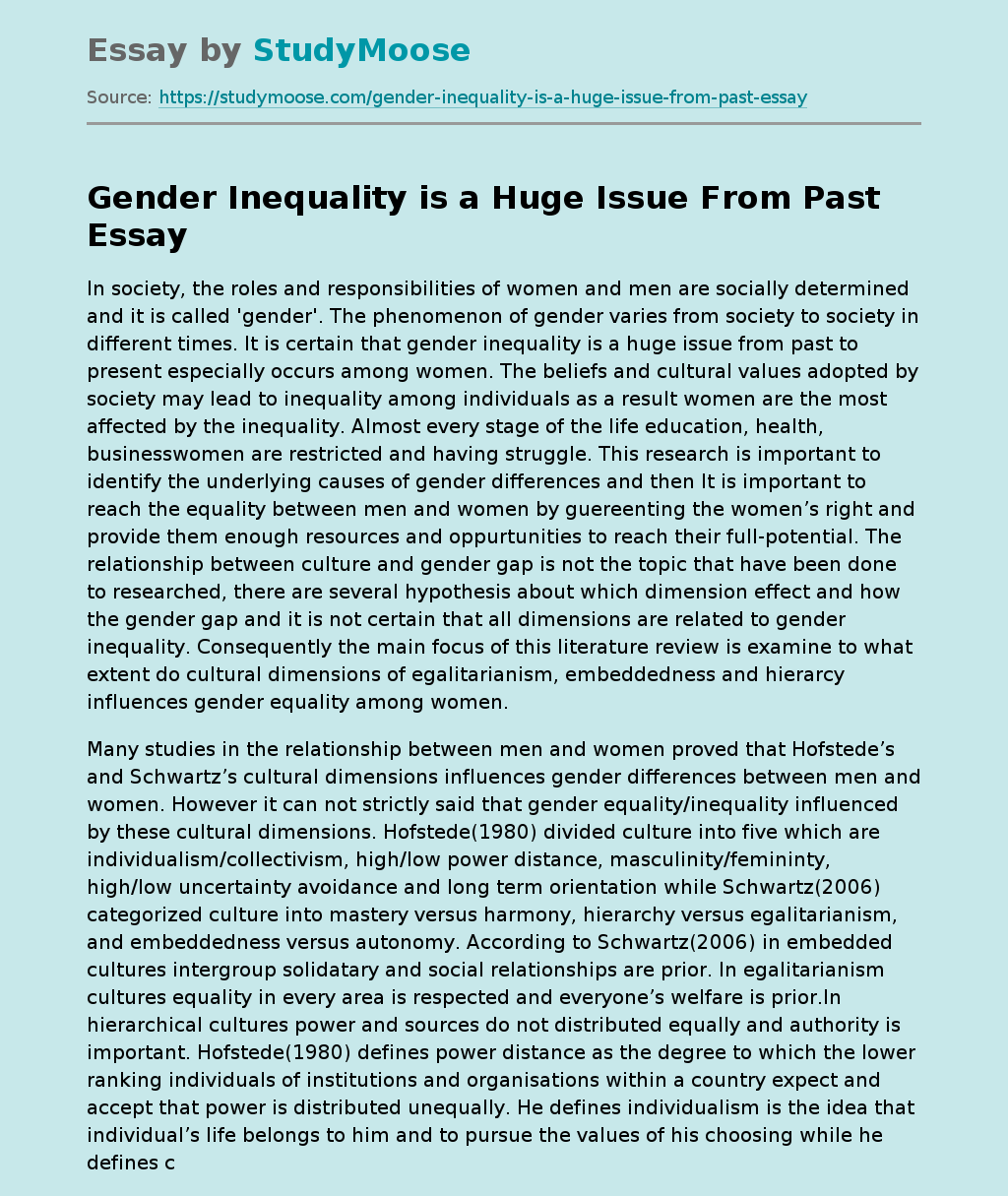