Gender inequality and discrimination in organizations will damage the individual quality of life in relation to Maslow’s analysis of human needs. Especially for higher order need which are needs for social, esteem and self-actualization.

Women experience gender inequality in workplace. Although there are many women who earn more than men, the average women earn is still lower than men’s. A study has found that in 1992, the median earnings of a year-round, full-time woman worker was $21,440 and for a man worker it was ,358.

Don't use plagiarized sources. Get your custom essay on
“ Gender Discrimination in Hotels ”
Get custom paper
NEW! smart matching with writer

Thus women, on average, make about 71 percent of what men make. Women age 45 or over, on average, have a net worth of 64%of men’s asserts, $282,826 compare to $430,650. On the other hand, when organizations hiring people, many executives have a subconscious that men can do better than women for some particular job. Many women feel that “if we try to climb the corporate ladder, we bump our heads on a glass ceiling, beyond which we cannot climb.

The glass ceiling metaphor for subtle gender discrimination in the corporate world.” In fact, in many people’s pespectives, some jobs are designed as the jobs men should do but women, such as actuary, financial analyst, financial engineer, administrator, professional specialist and so on.

It is gender inequality which is unfair. While women are moving into the professions, they are stalled in the lower-paying positions. Because this phenomenon has existed for a very long time, there appeared occupational segregation meaning that women sometimes been considered as somebody who do not fit for any particular jobs.

This kind of discrimination has leading an earning gap between men and women. For every dollar a man earned, a women earned, on average, 71 cents according to the Womens Bureau of the U.S. Department of Labor. It has been estimated that one-half of the earning gap is due to direct discrimination in the labor market. Thus, women desire more for the need of self-actualization because they believe it will be more harder for them to develop their creativity and problem solving skills, also, harder to reach their goals. What people lack is usually what they need. Women eventually have more need than men for self actualization.

Women experience gender inequality in social life as well. Many people still consider women is that group of people who should be in the lower class of the society. Gender discrimination is still a serious problem. An on-line consultation has ask a question that whether you agree gender inequality should be a highly priority or not. The answer show that 85.6% of respondents strongly agreed or agreed that gender inequality should be a priority. Another question was considering the issue if government should increase funding support for women’s organizations working for equality and bring women’s equality into attention of policy maker. The result can be translated into an average of 4.19 (5 in total), which indicates that the respondents generally agreed. For education, on the other hand, is more obvious.

In many parents’ subconscious, born a boy is much better than a girl, because they believe boys can be more successful than girls in the future. Depending on those thoughts, parents will let boys to go to school and been educated but leave girls at home to do some bacis housework. For instance, in China, in primary school, girls constitute only 44 percent of primary school enrollment. In secondary school, girls make up 39 percent. At college level and higher, women account for only 26 percent of enrollment. Thus, for the esteem need and social need, women have more on those than men. Women want to have more respect from other people, they want to be identified by their success. On the other hand, because of women’s nature characteristics, they will have more need on sex intimacy as well.

If we were asked to think of the hostile environment for women in the workplace, many of us, initially, would envision blatant employment discrimination, more-so sexual harassment. Despite living in the new age, where such behavior is denounced and illegal, these associations are in no way surprising. Mis-organizational conduct is far too familiar ground to us all. In fact, statistics from the Equal Employment Opportunity Commission show that “there has been no systematic decline over the past 12years in the number of discrimination lawsuits filed or the amount of monetary damages to the plaintiffs of these suits. However, not all forms of discrimination generate much attention. Evidence has proved that gender discrimination is less visible. In recent studies, it was revealed that a vast number of women in high-level positions in firms strongly believe that social exclusion not only overt discrimination but in turn too is a barrier to women’s’ advancement in their careers. Exclusion from informal networks of communication, inhospitable corporate culture and lack of mentoring are less biased examples that further demonstrate the subtle barriers women face.

To further advance this argument, a larger percentage of men were significantly less likely than women to believe that any of these factors hindered women’s’ advancements in their firms. Gender discrimination in Hotels. {Front Office Department} As Hotels are our main area of focus in this study, we shall take a more elaborate out-look on how discrimination is pronounced in the Front Office. Although this is a subject many refuse to acknowledge it is very dominant in the industry.

There is an irreconcilable difference between perceptions of what it takes to succeed in various work environments and the attributes that females are presumed to have. One of the main focuses of gender discrimination in the Front Office is mainly stereotypical. By this, many of the factors that mediate in hiring are based on characteristics of an individual and how they match the stereotype profile of Front Office personnel. Jobs tend to be gender based, by virtue of both the number of females versus males and the attributes deemed necessary for performance.

Statistically represented, either sex will highly represent many organizational roles and occupational categories. This theory is incorporated in Heilman’s “Lack of Fit model of Gender Discrimination”. It thus mirrors, that typically male dominated jobs are perceived as requiring traditionally masculine characteristics; and vice-versa being equally correct . There is a distinct trend in how staff is selected; usually more feminine individuals are selected. Discrimination may vary between age, race and more-so gender. Gender discrimination cannot, thus, be eradicated.

Work in the Front Office department

We find that there appears to be a higher female to male ratio in the Front Office department. This is not necessarily mandatory but has definitely set a trend. Many women with more confidence, taller, petite, out-spoken with more defined features are usually placed as the “face of the hotel” i. e. : in Front Office. This is opposed to more masculine and passive males, who might intimidate guests. Front office personnel are front of the house staff, meaning they are in constant contact with customers and represent the hotel on a large scale.

Therefore, human resource staffs tend to hire women versus men, friendlier yet professional candidates. It too has been detected, based on perhaps male intuition or egotism, for guests, especially men, to first approach a lady representative at the Front Desk as opposed to a male staff member. This cannot be derived from a specific cause but psychologists have concluded this through human behavioral studies. Women tend to dominate this department but on a smaller scale. As one looks further up the organizational hierarchy more men tend to attain managerial positions.

Situation in the Hospitality and Tourism

We thus then notice the imbalance in opportunity and then discrimination comes more into play. It can be depicted that the “situation” in the Hospitality and Tourism industry is reflective of the labour market in general. Thus there is a significant horizontal and vertical gender segregation of the labour market in the hospitality industry . Horizontally, both men and women are offered jobs in diverse fields – women are placed in front office; flight attendants; chambermaids, etc. whereas men are drivers; pilots; barmen, etc. Vertically, the “gender pyramid” is prevalent in the hospitality and tourism sector – low levels and occupations with few chances for career development are being opportune to women and key managerial positions given to men. Traditional gender – roles contribute to gender discrimination in the front office department. In these roles, women are assigned the main responsibilities of child rearing, household duties and caring of family members.

Thus, women are often forced to choose more casual labour, part-time and/or seasonal jobs. Legally, Human Resources cannot lay off women for having maternity leave off, which in Malaysia mothers receive 90days off . Therefore there is a very discreet tendency to hire men for higher positions in the department as well as the industry on a large. This is due to the mere fact that men are less prone to take absent leave, or paid-days leave to attend to family matters whereas this is traditionally a women’s responsibility. 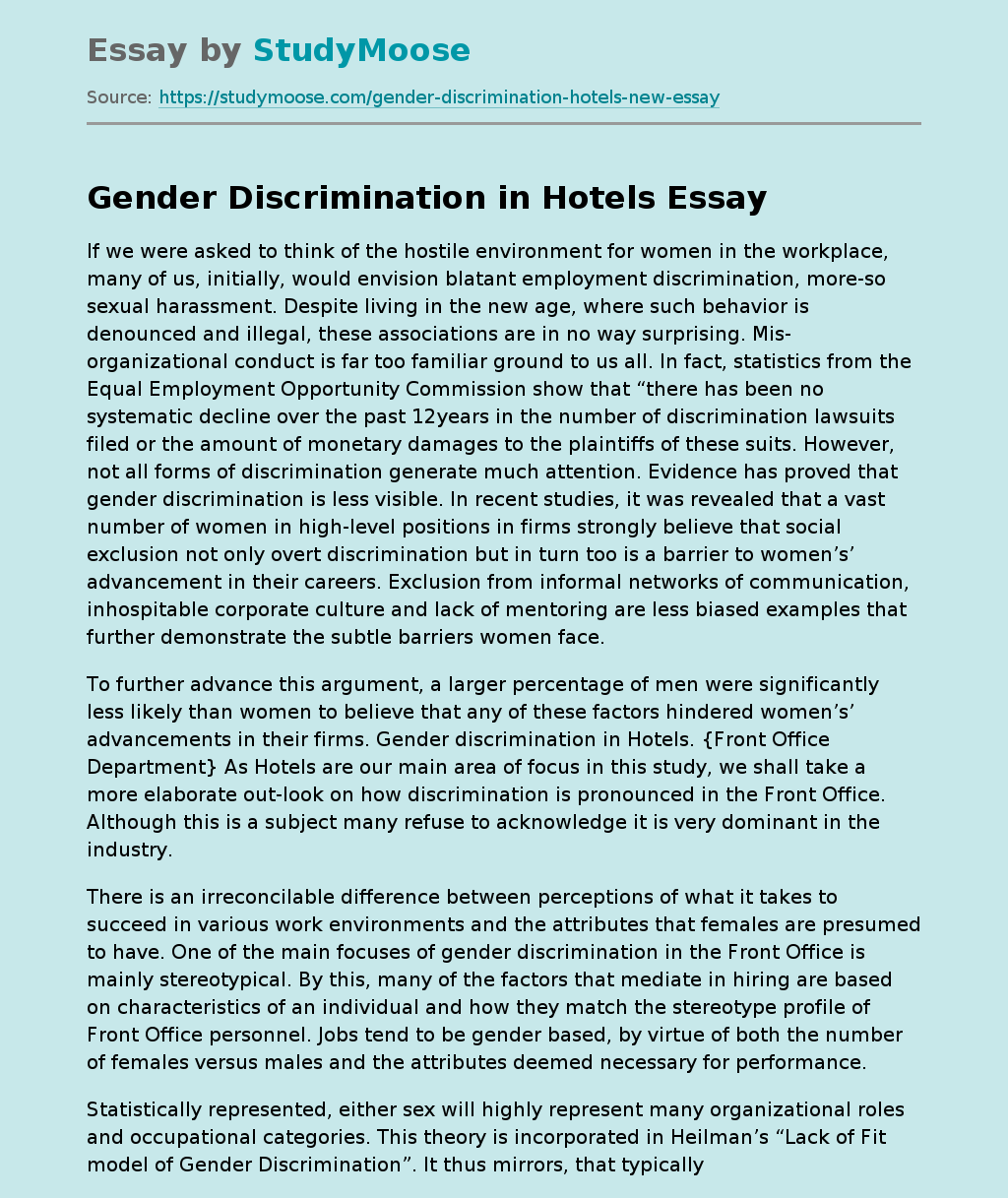