Friedrich Froebel was a German educator of the nineteenth century who developed an Idealist philosophy of early childhood education.

He established kindergarten and education for four and five-year-old children. Kindergarten is now a part of education worldwide. Friedrich Froebel was born in the small town of Oberwiessbach, Germany in 1782. His mother died when he was a baby. His father remarried, but Froebel never liked his stepmother. His feeling of rejection and isolation remained with him for life. This had a strong effect on his theory of early childhood education.

He believed the kindergarten teacher should be loving, kind and motherly. Froebel also had an unsatisfactory relationship with his father which, along with his shyness, caused him to be “introspective and socially inept” (Gutek, 2005, p. 261). Therefore, he wanted his kindergarten to “foster a sense of emotional security and self-esteem in children” (Gutek, 2005, p. 261). At the age of ten, Froebel went to live with his uncle. As a young child, Froebel spent a lot of time playing in the garden around his home.

This led to his love of nature and had a profound effect on his educational philosophy.

When he was fifteen years old, Froebel apprenticed with a forester and surveyor and studied forestry, geometry and surveying in school. He briefly attended the University of Jena from 1800-1802. Then he studied architecture at Frankfurt University. Although he ended his studies without receiving a degree, Froebel gained a sense of artistic perspective and symmetry he later used to design his kindergarten “gifts” and “occupations.

” While in Frankfurt Froebel was hired as a teacher at the Frankfurt Model School, which was a Pestalozzian school. He studied the Pestalozzi method of instruction which emphasized using objects to teach.

His method rejected the use of corporal punishment and emphasized respecting the dignity of children. This method of teaching very much appealed to Froebel. Froebel wanted to incorporate Pestalozzi’s method and creation of a loving and secure environment for children in his own teaching methods. After teaching at the Model School for three years, Froebel studied with Pestalozzi for two more years Froebel also decided to study languages and science at the University of G? ttingen. He wanted to identify linguistic structures that could be used in language instruction.

During this time he became very interested in geology and mineralogy, and also pursued this in his studies. Froebel believed that the process of crystallization (moving from the simple to the complex) emulated a “universal cosmic law that also governed human growth and development” (Net Industries, 2008, Biography section, 3). He would later incorporate the geometric shapes and formations in crystals to create his kindergarten “gifts. ” In 1816, Froebel started a school in Griesheim called the Universal German Educational Institute. He enrolled students who were 7 years old or older.

The school eventually moved to Keilhau. The school remained opened until 1829 when it struggled and was forced to close. However, Froebel was able to test and develop some of his educational ideas in his school. In 1818 Froebel married Henrietta Hoffmeister. She shared Froebel’s love of children and assisted in his educational work until her death. Froebel established an educational institute at Wartenese in 1831. Later, he was invited to establish an orphanage at Burgdorf. Here he conducted a school for the town children and a boarding school for those who lived away.

He trained teachers and established a nursery school for 3 and 4 year olds. He developed songs, rhymes, games, physical exercises and other activities for the nursery school. He experimented with the objects and other materials that eventually became his kindergarten gifts. He also stressed play and its role in education. In 1837, at the age of 55, Froebel relocated to Blankenburg and established a new type of school for early childhood education. He called it “kindergarten,” or “the children’s garden” (Smith, 1999,  5).

This word expressed Froebel’s vision for early childhood education: “Children are like tiny flowers; they are varied and need care, but each is beautiful alone and glorious when seen in the community of peers” (Smith, 1999, 6). He used play, songs, stories, and activities to establish an educational environment in which children, by their own activity, could learn and develop. According to Froebel, this meant that children, in their development, would learn to follow the “divinely established laws of human growth through their own activity” (Net Industries, 2008, Biography section, 5).

This is where he used his kindergarten gifts and occupations. “Gifts were objects Froebel believed had special symbolic potential. Occupations were the raw materials children could use in drawing and building activities that allowed them to concretize their ideas” (Gutek, 2005, p. 265). Froebel became famous as an early childhood educator in Germany and by 1848, forty-four kindergartens were operating in Germany. Froebel began training young women as kindergarten teachers. Kindergarten achieved its greatest influence in the United States.

It was brought to America by the Germans after the European Revolution of 1848. Kindergartens appeared wherever there was a large concentration of German immigrants. Henry Barnard, the first United States Commissioner of Education, introduced Froebel’s kindergarten into educational literature in the 1850’s by including it in the American Journal of Education, of which he was the editor. He also recommended to Congress that a public school system be established for the District of Columbia that would include kindergartens. In 1873, William Torrey Harris established a kindergarten at a school in St.

Louis, Missouri and incorporated it into the public school system. This event led to more public schools incorporating kindergartens into their systems. Eventually, Harris became the U. S. Commissioner of Education and he continued to press for the incorporation of kindergartens into public school systems throughout the United States. Before Froebel started his kindergarten, children under the age of seven did not attend school as it was believed that these young children did not have the ability to develop the cognitive and emotional skills needed to learn in a school environment.

However, Froebel believed in early childhood education: “because learning begins when consciousness erupts, education must also” (Pioneers, 2000, 7). In his book, Education of Man, Froebel states the idealist themes of his philosophy: “(1) all existence originates in and with God; (2) humans possess an inherent spiritual essence that is the vitalizing life force that causes development; (3) all beings and ideas are interconnected parts of a grand, ordered, and systematic universe” (Net Industries, 2008, Froebel’s Kindergarten Philosophy section, 1).

This is what Froebel based his work on, claiming that each child had an “internal spiritual essence – a life force” (Net Industries, 2008, Froebel’s Kindergarten Philosophy section, 1). This life force seeks to be manifested through self-activity. He also believed that “child development follows the doctrine of preformation, the unfolding of that which was present latently in the individual” (Net Industries, 2008, Froebel’s Kindergarten Philosophy section, 1).

Froebel’s kindergarten created a special educational environment in which this self-activity and development occurred. Froebel used his kindergarten gifts, occupations, social and cultural activities, and especially play to promote this self-activity. Froebel also believed that children were to learn that they were members of “a great universal, spiritual community” (Gutek, 2005, p. 266). Thus the use of games and social activities. According to Froebel, play was essential to educating the young child.

He believed that through engaging with the world, understanding would develop. That is why play was so critical – it is a creative activity through which children become aware of their place in the world and the world around them. Education was to be based on each child’s interests and spontaneous activity. The kindergarten teacher’s job was to create an environment that would stimulate the child’s development. She was also to create a safe, secure environment that prevented anything from disturbing this process.

It was essential to the kindergarten children’s progress that the teacher did not hinder the child’s free play and individuality. Each child would learn what he was ready to learn when he was ready to learn it. As Froebel states: “Education in instruction and training, originally and in its first principles, should necessarily be passive, following (only guarding and protecting), not prescriptive, categorical, interfering” (Sniegoski, 1994, p. 8). Froebel believed the kindergarten should have a pleasant physical environment.

He recommended the use of an adjoining garden or a brightly painted room with plants, animals and pictures. This should also be a prepared environment which would provide the teacher with the proper tools which the teacher felt would be most beneficial to the learning environment. And instead of traditional books, the kindergarten should teach using geometrical play objects of different shapes, sizes and colors (“gifts”). He also believed in symbolism and that if a child played with the “gifts,” they would help the child to understand fundamental truths. Froebel’s gifts consisted of:

(Net Industries, 2008, The Kindergarten Curriculum section,  1). Also, Froebel designed “occupations” to be used in the kindergarten. These allowed more freedom and were things that children could shape and manipulate. Examples of “occupations” are string, sand, clay, and beads. As always, there was an underlying meaning in all that was done in Froebel’s kindergarten. “Even clean up time was seen as a reminder to the child of God’s plan for moral and social order” (Nichols, n. d. , Occupations section, 1). Froebel’s careful study of the nature of children and their part in the world continues to be of great importance, as it opened a door to a new world in childhood education. Froebel attached importance to what “originated in children, not merely what adults gave them to do or learn” (Sniegoski, 1994, p. 15). He also discovered the educational value of play and the use of new non-book, hands-on materials in teaching children.

Froebel provided a “theoretical basis for early childhood education that recognized stages of intellectual growth” (Sniegoski, 1994, p. 15). The one aspect of Froebel’s theories that has disappeared for the most part is the mysterious symbolism that overcastted his educational philosophy. However, his ideals of freeing children to develop according to their own interests and needs and giving them a bright, playful, nurturing environment in which to learn remains an important and vital part of early childhood education today. 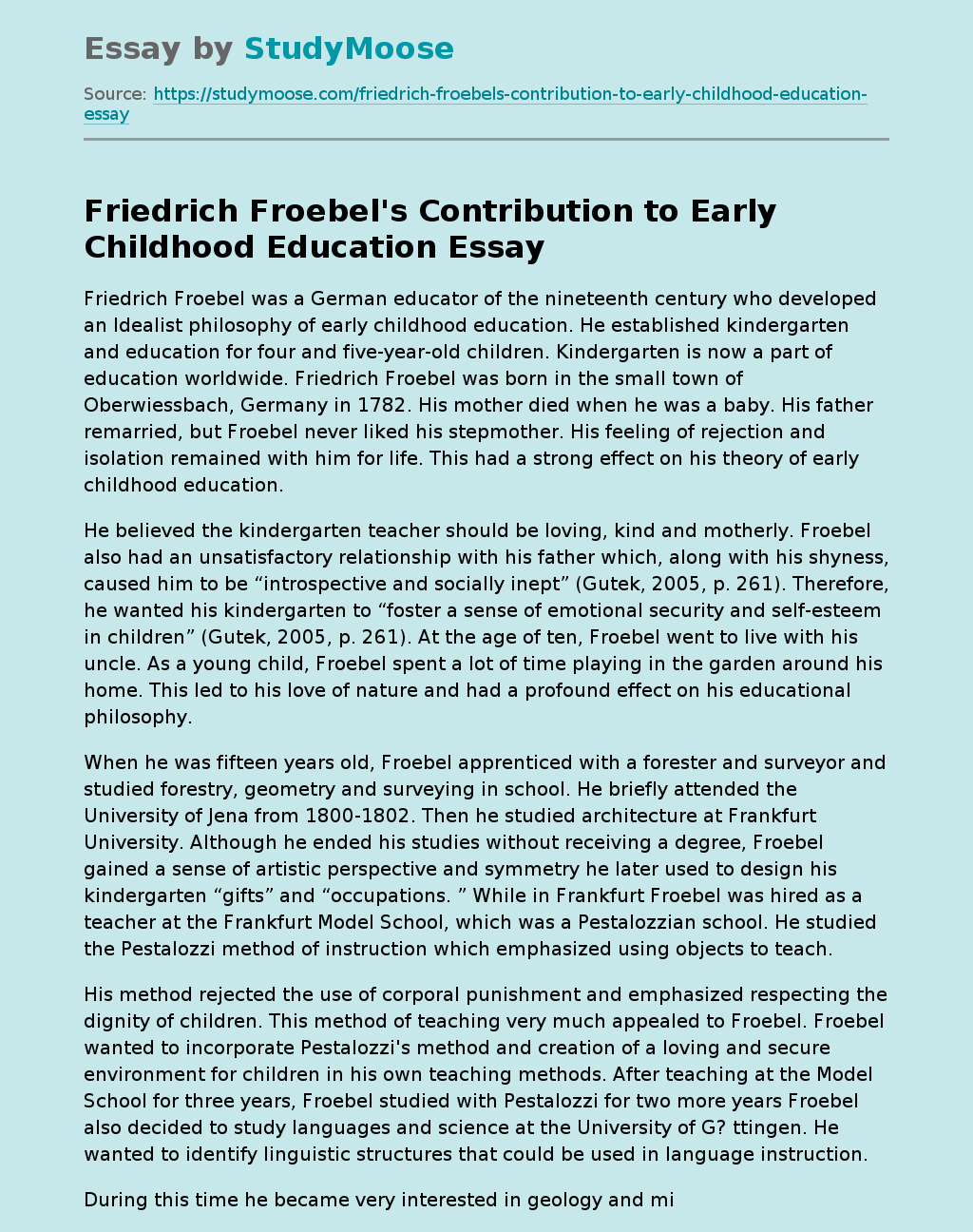