In Long Beach, California, a war is raging. You can’t always see it, but its soldiers know it’s there. You need to go and watch “Freedom Writers” right this instant. In this heartwarming movie, Hillary Swank plays quirky school teacher Erin Gruwell who, alongside her unsupportive husband (played by Patrick Dempsey) attempts to make history with her class of integration students, played by April Lee Hernandez, Jaclyn Ngan, Armand Jones and many more. The movie plays for 122 minutes of pure joy and raw emotion, where we get to see wonderful changes in the most unlikely people.

Don't use plagiarized sources. Get your custom essay on
“ Freedom Writers by Richard LaGravanese ”
Get custom paper
NEW! smart matching with writer

The film was directed by Richard LaGravanese and released by Paramount Pictures on January 5th, 2007. “The Freedom Writers” is an emotional drama, filled to the brim with suspense and hope that will leave its viewers in a state of mixed emotion. In the movie, there is a war being fought in Long Beach between the Blacks, Latinas and Asians and it seems irresolvable.

On Erin Gruwell’s first day teaching at Wilson High, words are being spat out and fights are erupting, she sees that the students do truly hate each other.

She then makes it her mission to teach the students of room 203 about respect, about dignity, and what it will really mean when you fight for “your own” or die trying. Through Snoop Dog and Tupac, the peppy teacher somehow gets through to her students and learns that each and every one of them has been somehow affected by gangs and gang violence.

Throughout freshman and sophomore year, the students of Erin’s English class find themselves respecting her, and respecting each other, which shocks them all. They are taught to write in a diary, which showed them that it doesn’t matter what is read, but what has been written.

The school seems to have finally found peace within itself and room 203, but disaster strikes when we find out that Erin is not allowed to teach junior and senior years, and that her students must go on without her. Does this mean that gangs will reconnect? Shootings, will they start back up again? Can the balance of peace really be kept one, very strange, second year teacher? The climax of this film touches the heart and minds of the viewers, and makes the long rising action worth every minute. “Freedom Writers” takes place in Long Beach, California and is set in 1994-1996.

It travels through the treacherous homes of the students, and shows the viewer what it’s really like to live a day like them. The setting sets a dim mood and shows the viewer how poor the kids truly are. It makes the viewer think about how hard life can be, while the plot shows us the harsh truth. The special effects in the film add an edge to what would have otherwise been a very slow film. Sound effects were few and far between, but added an edge where they were placed. A more plentiful effect would be voiceovers, where the students read excerpts from “The Diary of Anne Frank” and their own personal diaries.

It showed the viewer that they were getting a voice, and that they were no longer afraid to speak up. The costumes and lighting reflected the variation of cultures and gangs in Wilson, and enhanced the overall mood of the story. Special effects and elements were very strategically placed in “Freedom Writers”, they were not sparse enough for the viewer to lost interest, but they were also not overused to enhance a certain concept. In “Freedom Writers”, there were many actors that played very important parts in making the film so touching and sad.

The main character was Erin Gruwell, played by Hillary Swank who does a wonderful job catching the essence of a believer. Swank puts forth a believable performance, where the viewer really thinks that she is feeling some kind of a connection to her students. With great facial expression and the ability to look as if she is holding back fake tears, Hillary Swank makes the viewers feel as if they too can experience such real, hard emotion. Another character that played a key role in the film was named Jamal Hill; who was played by Deance Wyatt.

Jamal was a student of room 203, and to the untrained eye, he comes off as your stereotypical gangster who could care less about school and everybody else around him. However, when a racial caricature of Jamal with very large lips circulated through the class, he begins to cry and we see that gangs have almost ruined his life. Later on in the movie, Deance Wyatt reads from his characters diary with such passion and power, saying: “At sixteen, I’ve seen more bodies than a mortician. Every time I step out my door I face the risk of being shot. To the rest of the world it’s just another dead body on a street corner.

They don’t know that he was my friend” The way that Wyatt read these words made them so true, so passionate and it makes the viewer feel that there is a little bit of Jamal in all everybody. These two actors made the movie feel so real and so true; they did an excellent job portraying the true meaning of what it’s like to be a Freedom Writer. The film “Freedom Writers” has so many different meanings, so many different themes that their interpretations are up to the viewers. Social issues were touched upon making the story extremely controversial and yet somehow important for all teenagers to see.

It touches mainly on racial discrimination and how at that school, African-American, Mexican and Asian students in gangs do not get a voice. As Mrs. Gruwell develops relationships with each and every one of her students, she learns that all they truly want is for somebody to hear them, for somebody to remember them if they die. By giving the students their diaries, Erin attempts to get them in touch with who they truly are, and what they do with such a quiet voice shocks her. The movie shows viewers that together, they can move mountains.

The viewer will explore touching diary entries, teaching them that everything that is said will make a difference to somebody. It doesn’t matter what is spoken, or what is written, what matters will always be the moments when somebody hears the author. Hears them not by reading what is written, but by understanding that everybody has a story to tell and everybody’s story is important. The viewer will grasp a new found respect for everybody that they meet because, as learned though the movie, everybody has a voice, they just need to learn how to use it. “Freedom Writers” was a wonderful film and an even better experience for its viewers.

It touched upon so many different social issues so that there is something for everybody to relate to making it such a great movie to watch with others. There are so many different interpretations to be made, so this film is recommended for teenagers aged 13-18, because that is the age of the characters along their journey. This was an amazing movie, and everybody that watches it should agree. There is not one possible way that any viewer will not find a character that reminds them of themselves and what they’ve been through, even at a less intense level.

Freedom Writers” compares to “Pay It Forward” and this is because it explores the concept of respecting each other and respecting oneself. The idea of a few people being able to change the world is also explored and well conveyed in each film, making them incredibly relatable and inspirational. The film was touching, and impressively well made. The actors were phenomenal, the effects were catchy and there were many other elements that the viewer will discover on their own. “Freedom Writers” is recommended to anybody that wants to learn a little bit more about respect, dignity, love and the harsh, cruel world around us. 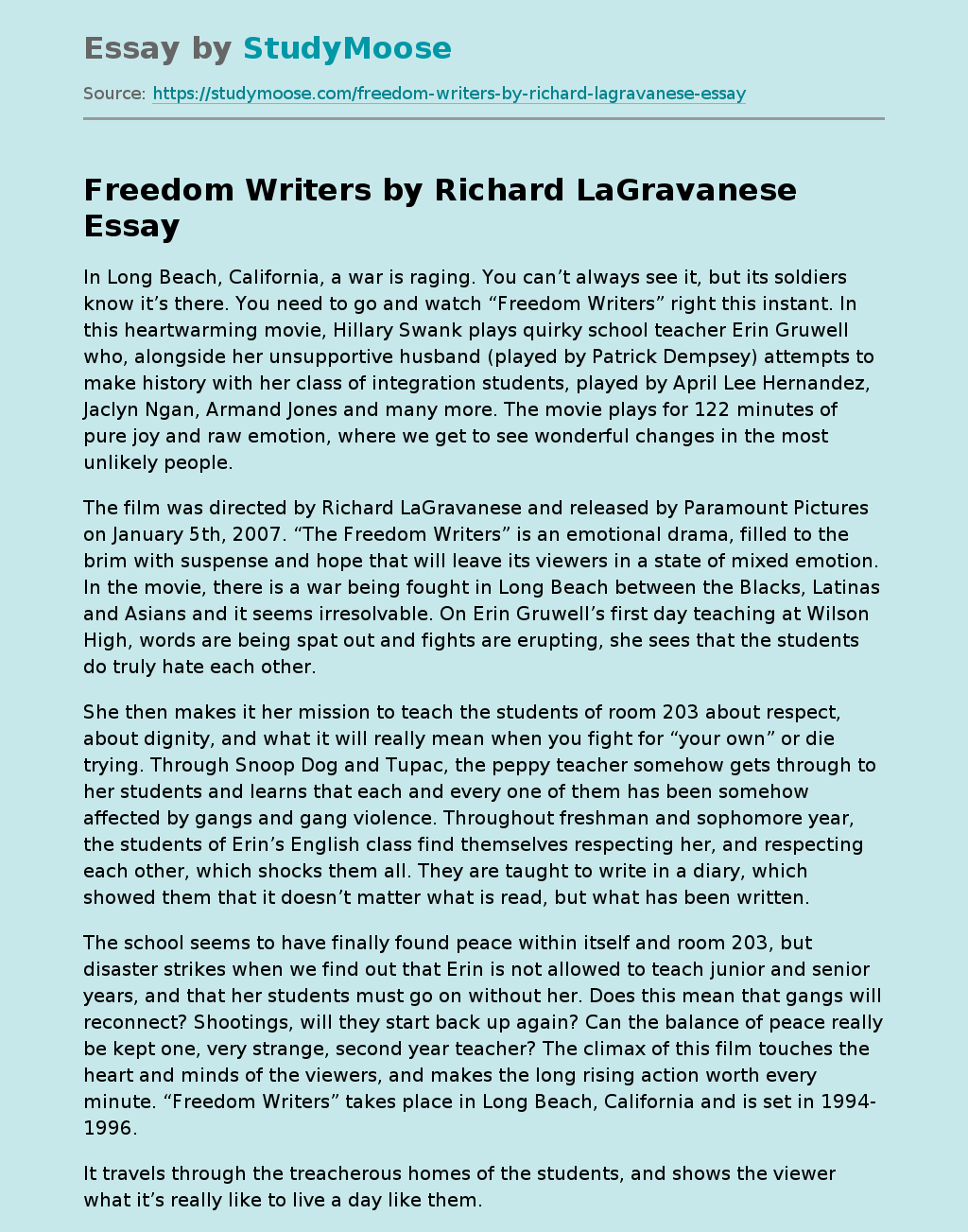