Don't use plagiarized sources. Get your custom essay on
“ Fractional Distillation ”
Get custom paper
NEW! smart matching with writer

The Northern Pines Chemical Company specializes in manufacturing chemicals from wood products such as turpentine. To obtain pure α-pinene, it must be separated, using fractional distillation, from the other major component  turpentine, β-pinene. This company would like to switch to a cheaper and longer-lasting packing material. The objective of this experiment was to separate an equimolar mixture of cyclohexane and toluene by simple and fractional distillation, using an empty column and a copper sponge column respectively. The distillate was analyzed through gas chromatography, using helium as the mobile phase. Helium is a good mobile phase because it acts as an unreactive carrier-gas that pushes the samples through the chromatogram. This information was used to determine which packing material is most effective by comparing HETP values which based on the number of theoretical plates each material provides. Using the copper sponge as packing material in the fractional distillation column provided a very effective separation of cyclohexane and toluene.

The calculated HETP for simple distillation was 8.274 cm/plate and 3.332 cm/plate for fractional distillation. The fractional distillation was more effective because it had a lower HETP value which means that it has a higher number of theoretical plates for the same column length as the simple distillation. When comparing the purity of the major cyclohexane-rich fraction with the starting mixture (the equimolar mixture of cyclohexane and toluene) of each distillation the packing material improved efficiency by more than six percent. One way to recover cyclohexane with even greater purity would be to heat the starting mixture slowly and steadily instead of rapidly, allowing better separation of the components.

Another way to improve purity is to make sure the column is properly packed (not too tight) and insulated. Different packing materials will have diverse efficiency for distillation and therefore yield different HETP values. The most efficient packing material used was “rascing rings,” which provided an HETP of 2.67 cm/plate. The copper sponge material had an HETP value of 3.3 cm/plate, followed by glass beads and coiled copper with 7.5cm/plate and galvanized steel with 12.5 cm/plate. Packing the Northern Pines Chemical Company’s 3ft fractionating column with rascing rings would provide 34.2 plates, which meets the minimum requirement for separating α- and β-pinene.

2) The HETP value and efficiency of separation can be affected by experimental errors. A) If the HETP sample was collected midway through the distillation, the mole fraction of cyclohexane:toluene would be much lower, which would in turn yield a higher HETP value. B) If all of the liquid distilled within 5 minutes of heating, a higher HETP value would be found again because all of the toluene would be distilled as well. This also means poor separation. C) If two packed columns were stacked over the boiling flask instead of one, the HETP value remain the same if the columns were identical because the height and number of plates would be the same. 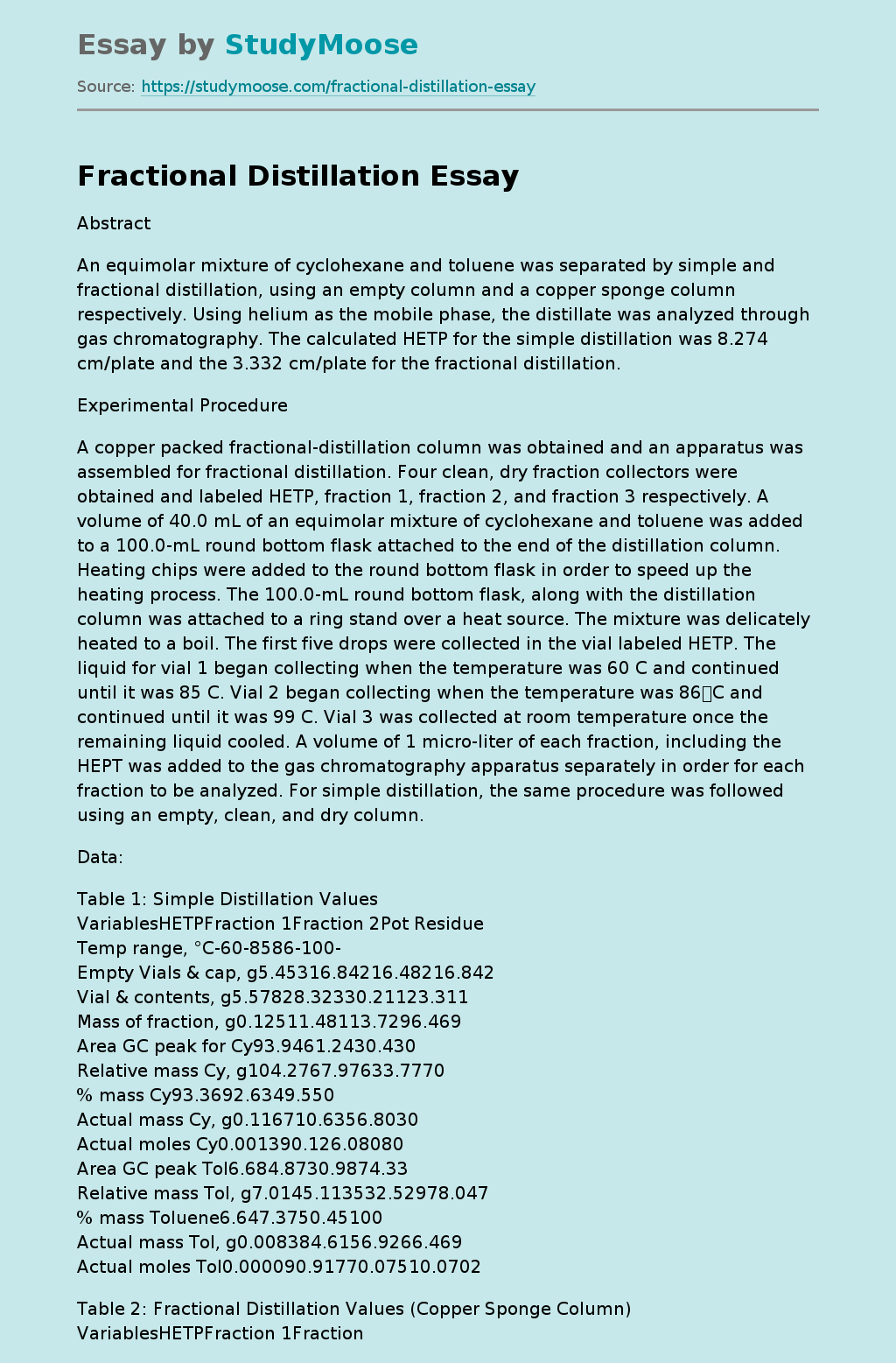