Are you or your child receiving an education that fits your element? If not then when would now be a good time to look into that? Adults and children today or mostly unaware of how education is being presented do to the fact that they are only aware of one type of education. Of course most of us all are all born and raised on the “ladder system” which is another way of saying formal education, but many people don’t realize that there is an abundance in different types of education.

We have all heard of private schools and charter schools, but those are just schools not education.

The levels being Elementary school, Middle School, High School, and finally college. Seeing that there are different levels to be completed makes a more focused approach on education which in the long run will increase your intelligence, do to wanting to complete the final task which is college. Even by doing this many people blindly rush into college only forgetting what they have learned in middle school and even high school. Formal education is also very narrow and not open in many other experiences. Formal education schools are often decided what to teach based on what the state wants.

With most of the formal educations power going to the government and states. That leads formal educated schools to having a very closed curriculum and not being able to learn outside the box or have any other experiences. With formal education being a ladder system and a narrow curriculum, you can see that in terms of college expectations you are intelligent, but in realistic experiences you are not. Now what is Informal Education. Let me share an idea with you before i tell you. You probably know what a formal event is right?

You wear a formal garment such as a suit or a dress and you go to a very on point social event, but whatever when you are not dressed formally? You tend to have more creative freedom and you start to be educated on different types of apparel. Informal education the informal clothes appose to formal clothes such as a dress or suit. In the world of informal education there is no Ladder system. It is in short basic education but in a progressive form. And with being no ladder system the states are not involved with the curriculum which means you get to learn outside the box and experience far more than formal education could ever teach you.

Formal education gives you a very narrow curriculum not allowing you to experience other things that are more valuable outside of school. Most of the things in formal educated school apply only to school and not in the real world although english, science and some math is an exception. Informal education allows you to see many different prospectives on certain subjects and you really get to experience a lot more than what the state narrows it down too. Experience such as different people usually everyday, different subjects everyday and when a subject is ever retaught, it is taught by a different teaching making a different point of understanding.

The education in an informal school is usually basic things that you would learn in middle school, but going more into formal education it starts to be applied to many different areas in a real world circumstance, and applied several different ways. In a formal education school you are taught more advanced things that help develop the brain, but has no use in the outside world. In todays formal educated schools we are all taught that knowledge is power but that is really an understatement. What use do you have of acquired knowledge if you don’t even know how to apply it in a real world circumstance? Point proven.

Formal educated schools today are focused to much upon how to help you get to the next step of the ladder rather than helping you understand the use of the information provided. While formal education has a great affect on the brain development wise, it lacks many uses outside of its buildings. In formal education on the other has many experiences that are less advanced and may not enhance or develop the brain much. But if knowing how to use one piece of great information acquired and it making you become very successful. Then all the other information obtained that had no transformational value was just a waist of time.

What people do not know is the physiological effects that the cards hold towards the child. When growing up we are all taught right from wrong, but it is now human nature to focus only on the problems. With that said many times in elementary school kids are often punished more than rewarded, and many times barely acknowledged for the good they have done. When still developing at a young age there brains start adapting and internalizing what they are surrounded by.

Many times do kids get yelled at for there miss behavior and even punished frequently. And not so often do the kids get praised with the same amount of energy they were being punished for. With so little energy going towards the good and rewarding, and so much going towards punishing there starts to become an imbalance of emotions. In the long term the students feel like they are useless and not worthy enough for whats to come.

With that they start growing up with these feelings and in the long run do not have the emotional uplift to conquer any dreams or goals. While during informal education every student is treated equally and is not so much punished as they are rewarded. This in the long run carries the opposite effect than in formal education. 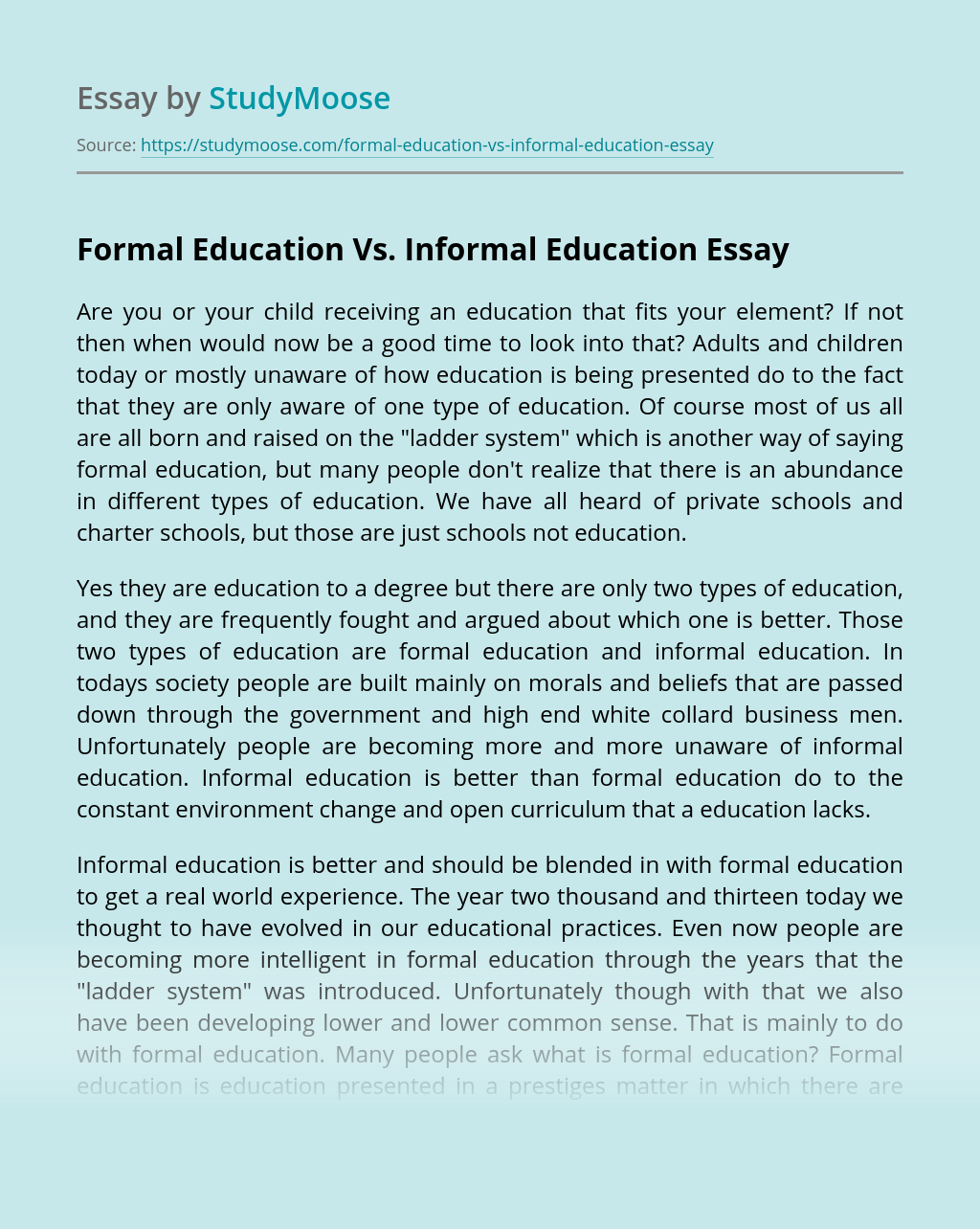 Curriculum Development for inclusive practice Curriculum is defined as the following; a specific blueprint for learning that is derived from content and performance standards. Curriculum takes content and shapes it into a plan for effective teaching and learning. Thus, curriculum is more than a general framework, it is a specific plan with identified lessons in... VIEW ESSAY

View sample
The Problem of Rural Education in the Philippines

About 80% of the Filipino poor live in the rural areas of the country. These are towns located deep in the mountains and the rice fields. The population density in the rural parts of the country is low, and there is a corresponding deficiency in schools and classrooms. Public school is free, but families still... VIEW ESSAY

Pre-colonial period During the pre-colonial period, education was still decentralized. Children were provided with more vocational training but fewer academics. Philippine schools were headed by parents or by their tribal tutors. They employed a unique writing system known as baybayin. Spanish Period When the Spanish first arrived in Manila, they were surprised to find a... VIEW ESSAY

Cheating is an easy shortcut in terms of getting homework, tests, assignments and such done in a quick way. Cheating is efficient in a lot of things in life. Cheating should not be a crime for students, especially in high school. This Argumentive Essay is basically going to be focusing on 3 topics on why... VIEW ESSAY

Education is a process of learning. It is a kind of method to get knowledge in human life. As John Dewey said education ‘brings out all capabilities’ of human beings. It helps us to live our life independently. Accordingly, Socrates said that education has taken out our ideas from ‘innate capabilities’ so that we can... VIEW ESSAY