“Two little dickie birds, Sitting on a wall;” These opening lines of the nursery rhyme introduce two of the main ideas within the novel.

Don't use plagiarized sources. Get your custom essay on
“ Fly Away Peter ”
Get custom paper
NEW! smart matching with writer

The two birds talked about in the nursery rhyme are Peter and Paul. the birds and are a reference to the motif of birds seen throughout the book. The birds are used to symbolise the idea of life being a continuous cycle that carries on regardless of the situation, “even here, in the thick of the fighting, there were birds”. For Jim the birds symbolised normality and provided a “private reassurance”. This provided Jim with a sense of normality in the middle of ‘hell’.

Proficient in: Fly Away Peter

In the rhyme the wall symbolises the sanctuary.

These add an extra level to the understanding and the natural beauty of the sanctuary. The sanctuary is also used to introduce another theme of the novel, two planes of live.

Within the first sentence Moulaf uses a narrator voice to introduce the setting of the novel. With the Use of Jim being a narrator Moulaf foreshadows the idea of there being two planes of life. “a clumsy shape had been lifting itself out of an invisible paddock”. The invisible paddock talked about in the first sentence is foreshadowing of the introduction of the two planes of life. Moulaf is also using symbolism. The “invisible paddock” symbolises the sky, and as later introduced the view from the sky is the second plane of life.

Moulaf has used the lines; “One named Peter, One named Paul” to link the characters of the book to the religious views and ways of living in the 1960’s. In the 1750’s the rhyme ‘Two Little Dickie Birds’ talked of two birds names Jack and Gill, in the early 1900’s the names were changed to the disciples ‘Peter and Paul’. In ‘Fly away Peter’ Moulaf has used this link between the birds name to introduce the religious connections. The bird peter symbioses Jim and Paul symbolises Ashley in the context of ‘Fly away Peter’. Throughout the novel Moulaf uses the literary technique of narration to tell parts of the story. “The world Jim found himself in…” this narrator figure symbolises God. Jim and Ashley also symbolise angels. This references the first quote Moulaf placed in the front of the novel. The “divine creature” is an angel. Jim and Ashley are angels incarnated in a human form, and the ‘flying away’ is the time on earth and the coming back is the return to heaven. In the novel Jim dies from injuries sustained form a battle, and in this the cycle of his life is complete and he returns to heaven.

The lines “Fly away peter, Fly away Paul” foreshadow Jim and Ashley going to fight in the war. The war is the complete contrast of the Sanctuary. The descriptive language used shows the contrast between the two locations. Moulaf describes the sanctuary using phrases such as “wooded country beyond” and “silvery scrub” in comparison to the description of the war; “The air was tormented” and “Deadly”. The war is over-run with rats, which are seen as creatures of evil, where as the sanctuary is full of birds which are
creatures of the sky. Moulaf also uses the cattle trucks to symbolise how the soldiers were treated. The trucks had a sign which read “eight horses or forty men” meaning the army treated the soldiers as if they were as replicable as cattle. The cattle trucks also took the cattle to the abattoir, likewise the cattle truck is taking the majority of the soldiers to their death.

The rhyme itself is a cycle, the birds fly away and come back again “Come back Peter! Come back Paul!”. With the religious understanding and interpretation of the novel the coming back is returning to heaven, however the coming back can also be related to the quote at the beginning of the book, where it talks about “the stone will be our bed”, the returning is being buried in the earth. Moulaf introduces the theme of digging early in the novel, however this motif is used when Jim is dying. During war digging symbolises a grave, and after a long exposure to war Jim assumes digging has to be for a grave “a grave it must be”. During Jim’s stream of consciousness before his death he meets Clancy, the first hint that Jim has either passed on or is hallucinating. Clancy instructs Jim to dig, “That’s the style! Dig”. When you are buried you are returned to the earth, and hence returned to the stone. This is part of the continuous cycle of life. The lines “Come Back Peter! Come Back Paul!” foreshadow the ending of the novel and complete the cycle, which is one of the key themes Moulaf is portraying.

Moulaf has used a variety of literary techniques such as contrast, Imagery, Symbolism and foreshadowing to portray ideas and themes throughout ‘Fly Away Peter’. Malouf focuses on the theme the continuous circle of life to illustrate the connection between the novel and life “the places, the stories of a life that was continuous elsewhere”. 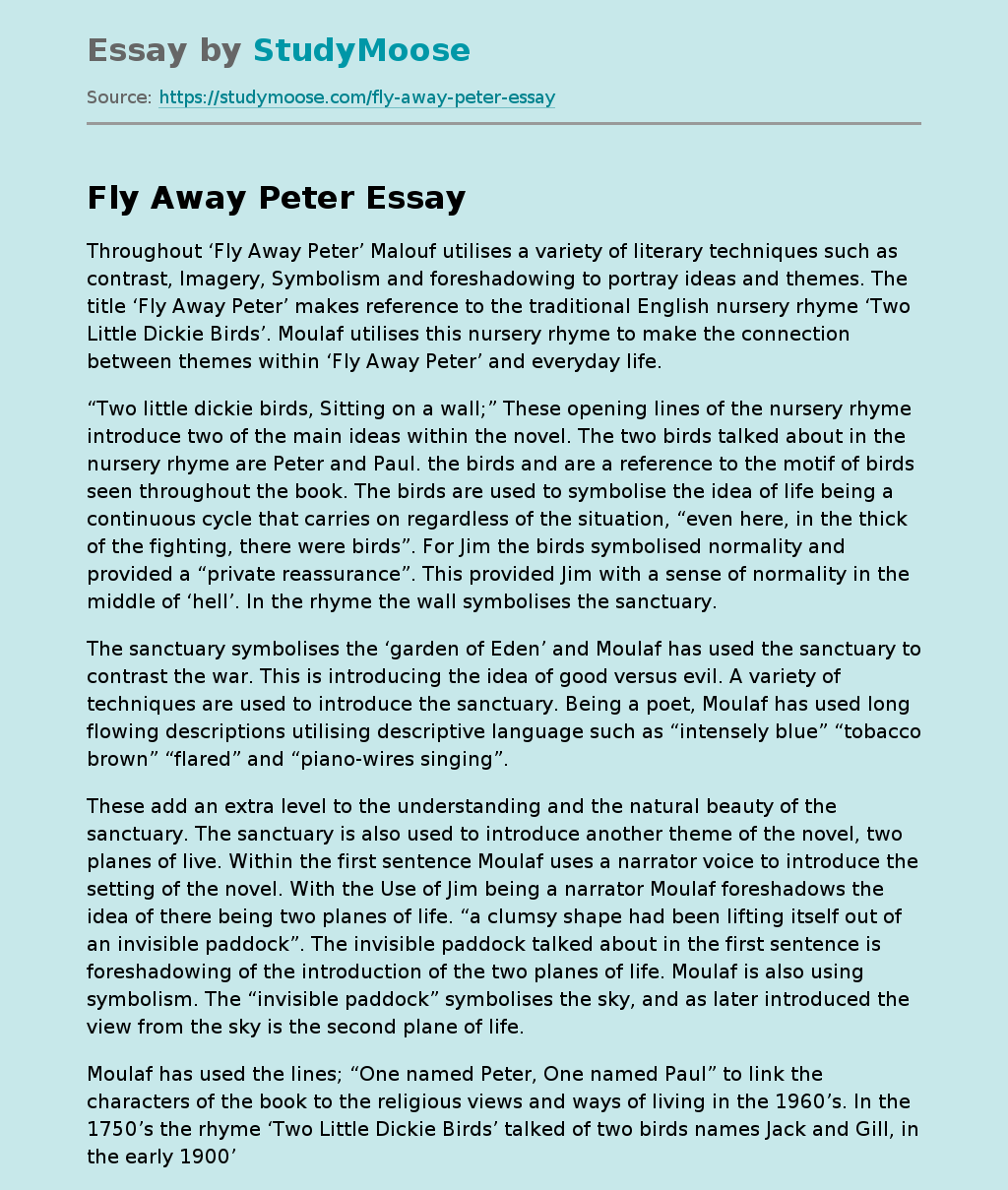