Directed by Robert Mulligan, the movie To Kill a Mocking Bird is an adaptation of Harper Lee’s novel with the same name. Narrated from the viewpoint of a six year old girl by the name of Scout Finch (Mary Badham), the movie tackles the issue of racism and prejudice against minorities that was ingrained in America in the post- and pre-civil war periods. Although the movie is set in a fictitious town of Maycomb in Alabama, it echoes the problems African Americans passed through at the hands of the white dominant rule.

Don't use plagiarized sources. Get your custom essay on
“ Film Research Paper: To Kill a Mocking Bird by Robert Mulligan ”
Get custom paper
NEW! smart matching with writer

The issue of racism is highlighted by the trial of tom Robinson, a black man who is accused of raping a white woman, Mayella Ewell (Collin Wilcox). Atticus Finch, his lawyer faces an uphill task of convincing the white jury of his innocence against a backdrop of racial prejudice that was evident in the small town. Although Atticus articulately reveals that Tom is innocent in his arguments, the defendant is found guilty by the judge when he claims that he felt sorry for Mayella, which prompted him to go and assist her.

This assumption angers the prosecutor because African Americans are deemed inferior and the prospect of a black person feeling sorry for a white person is unbelievable, unheard of and to some extent degrading to the white populace.

Tom is subsequently sent to jail and on the way he is murdered by a deputy, according to Sheriff Heck Tate’s revelations. The brief trial of Tom summarizes the sufferings that black Americans went through post the civil war.

Although slavery had been abolished, they were not fully integrated into the American society. They faced sharp backlash from whites, especially in the south who benefitted greatly from the slave trade. Even abolitionists like Atticus Finch still had black slaves (Calpurnia- Atticus’ cook).

During the Jim Crow era, black Americans were completely segregated and considered social outcasts. It was a taboo for whites to associate with them. Whites who were seen interacting with them in a more ‘civilized’ way, would undergo the same harsh treatment as their black friends. Consider the case of Atticus Finch, who despite being appointed by a prosecutor to represent Tom, he is branded a “negro lover”. A white mob therefore comes to lynch both him and Tom, including Cunningham who paid hickory nuts to Atticus for his services. His hate for black Americans blinds him from the fact that Atticus was kind to him, and is willing to end the good man’s life to satisfy his desire for Tom’s death.

This hatred does not end with Atticus- it extends to his children. Scout and his older brother are taunted in the schoolyard for their father’s decision to support a black man, despite being innocent victims in this whole debacle. Ironically, it is the young Finchs who are able to disperse the lynching mob. Apart from wrongful persecutions, blacks were also attacked by mobs and lynched. While there is no instance of a mob lynching in this movie, the people of Maycomb gather at the local jail to lynch Tom, although everything does not go as planned. Killing black people was not a big deal for white folks back then and they would easily get away without even a trial.

There is also discrimination against women. Before the civil rights movements in the ‘50s and ‘60s, America was basically a male chauvinist state. Women had no equal rights to men. While white women were considered superior to other minority groups, they did not enjoy the same privileges that white men enjoyed. Women’s roles were limited to housekeeping and child bearing. They were openly discriminated in job opportunities and paid lower salaries than male workers. It was only in the 1920s that women were allowed to vote after the passage of the 19th Amendment.

Since they had no claim to their husbands’ wealth, women were completely disadvantaged. As a result, many opted to stay in dysfunctional families, where they were physically, emotionally and verbally abused. Divorce was not an option for them, as they were completely reliant on their husbands’ providence. In the movie, it is evident that Mayella Ewell is physically abused by her father, Bob Ewell. Apart from the constant beatings she gets from her father, she is also forced to do hard chores, such as chopping chifforobes, tasks that are reserved for men.

Since the work is too much for her, she decides to seek Tom’s help. Tom shows Mayella compassion, a trait that is absent from her life. She falls in love with him, despite the racial barrier and consequently kisses him. Bob may have learnt of the affair and forced Mayella to falsely accuse Tom. Interracial relationships between white females and black males were very rare and not tolerated. On the other hand, white men could have sexual relations with black female slaves as they wished without any repercussions.

Another minority group in this movie is the “weirdoes” or the different types- the ones who do not commit to societal norms, such as hippies. This is represented by Arthur “Boo” Radley. Boo is the black sheep of the town. Due to his reserved, isolated and quiet life, many narratives have been formulated to describe him. He has been credited with most of the weird things in the city, even though they are all mere speculations. At the end however, he is the person that saves the young Scout and his brother Jem from Bob Ewell, which subsequently changes the perception of everyone that is present. The movie airs the societal perception of unique people. Just because we do not understand them does not mean they are evil. Once you get to know them, you realize they are normal people with emotions like us.

To Kill a Mocking Bird is among the greatest movies that highlight the plights of minority groups in America. Despite the despair they faced, the movie offered hope for the discriminated people through the actions of the protagonist. As a result, Atticus Finch was named the greatest hero of the 20th century by the American Film Institute in 2003. The movie questions the concept of superiority and inferiority among races. Ironically, the people that suffer in the movie, suffer at the hands of their own people. In conclusion, this movie is a rare gem that should be in everyone’s must watch list before they die.

Film Research Paper: To Kill a Mocking Bird by Robert Mulligan. (2018, May 31). Retrieved from http://studymoose.com/film-research-paper-to-kill-a-mocking-bird-by-robert-mulligan-essay 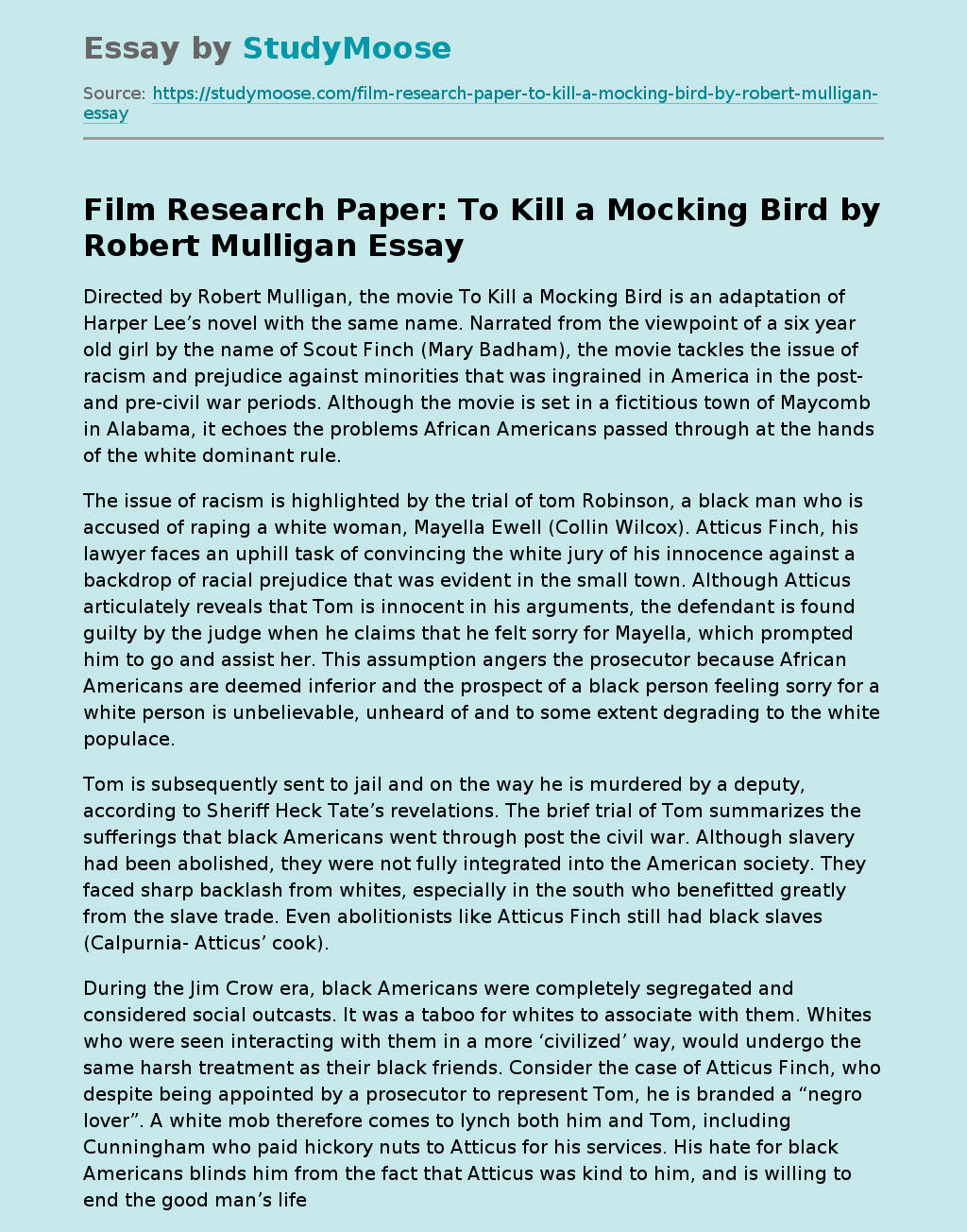