Female characters in Death of a salesman are marginalised and trivialised. Criticism from feminists reflects the lives of women and what extent they are marginalised and trivialised. Women are being relegated to a secondary level and are made unimportant as portrayed by critics, feminist and Arthur Miller in his book Death of a salesman and this can be derived from their views towards the topic. There are different reasons why and different ways in which women are made unimportant and ways in which this may be stopped if not minimized.

Don't use plagiarized sources. Get your custom essay on
“ Feminism and Marginalization ”
Get custom paper
NEW! smart matching with writer

Some feminist view marginalization and trivialization as factors brought about by equality or difference in gender or sex. They argue that women’s supposed differences from men have been used over the centuries to justify discrimination against women and their exclusion from full social and political citizenship. They argue that the constant differentiation, however has been that women have been given an inferior or secondary status in the society because of the assumed natural sexual difference pg9-10 (freedman.

For centuries difference has been the starting point of and justification for the creation of different social roles for men and women. Not only was women’s biological capacity for child birth and breast feeding and the generally lesser physical strength seen as determining their social role in the home ,occupying themselves with domestic chores and bringing up children, but it was also claimed that these biological differences made them unfit to participate in the public sphere. Women were judged to be less reasonable than men, more ruled by emotion, and thus incapable of political decision making, for example.

They continue to say that the social roles and modes of behaviour that civilizations have assigned to women have kept them in an inferior position to that of men. This means that women are not like the Working classes in Marxism ideology: they have not emerged an oppressed group because of particular historical circumstances, but have always been oppressed in all forms of social organization. Ortner(1998: 21) argues: the secondary status of women in the society is one of the true universals, a pan-cultural fact.

And as she goes on to explain, this secondary status of women can be explained by the fact that within multiplicity of cultural conceptions and symbolizations of women that exist and that have existed in different societies, there is a constant in the women are being closer to nature in their physiology, their social role and their psyche. Whereas women have been perceived as closer to nature, men have been perceived as closer to culture, more suited for public roles and political association.

For this reason, women have been relegated to a secondary status in the society, often confined to roles in the home rather than able to accede to powerful public positions. For example Willy Loman treated his wife Linda badly, he overpowered her and he bosses her and disrespects her and s always rude to her and this is why she kept herself busy with house hold duties as any other oppressed wife would do. E. g he doesn’t give her a chance to talk when she tries to give her own opinion pg31 and he shouts at her a lot even she is doing the best she can to make situations better pg69 (Arthur Miller. Death of a salesman) Carol Gilligan believes that the reason why women are marginalized and trivialised is because their voices have not been heard, that women have not been given a chance to air out their views because of the common culture that men are more superior.

‘Only if we can understand why their voices have been silenced, and how the dominant ideal of moral autonomy in our culture, as well as the privileged definition of the moral sphere, continue to silence women’s voices, do we have a hope of moving to a more integrated vision of ourselves of our fellow humans generalized as well as ‘concrete’ others’. Benhabib 1988:95) for example: where Linda tries to give suggestions or to air out her opinion then Willy tell her to shut up and he told her not to interrupt him. Willy does not allow her to say what she wants to say, he does not give her the opportunity to speak.

This in its own way is marginalization and trivialization because it proves how men feel that everything they say is right and matters most than what women say because they feel that they are more superior than women. pg31 and pg49(Arthur Miller. Death of a salesman) Feminist ambivalence to maternalism is based on the argument that women’s public role if framed women’s condition of oppression: the ideology of domesticity and women’s exclusion from public roles in society. The qualities and capacities make women different from men are those acquired through their condition of oppression. Pg31(Sara Goodman and Diana Mulinari. Feminist intervention in discourses on gender and development). Dorothy Smith(1987) has shown how men in position of power do not only control the world but name it and how women are excluded from the process of description and ordering the world.

SHULAMITH FIRESTONE 1979:12 believes that women’s oppression is thus the primary oppression, ‘an oppression that goes back beyond history to the animal kingdom itself’, and this oppression is based on biological oppression. The effects of biology are all-pervading, and women’s inferior social position can be explained by biology- their reproductive capacity and their weakened physical condition – these biological factors being reinforced by men’s development of social structures that keep women tied to their reproductive role. pg69 (freedman. Feminism).

Examples of oppression are where Linda always tries to make situations better as way to please her husband, she takes a lot from Willy and never complains about the way he treats her. She takes all this in because she believes in pleasing her husbanding and by so doing it is shown that she is oppressed, she is not doing what she wants but what she thinks is right because she lives under the shadow of her husband and her dictatorship. E. g Linda looks out for her husband, does everything in his favour and does everything for him. E. where she asks her sons not give Willy a hard time and where she tries to make the situation batter by telling him that it was just a joke yet she know it wasn’t and she does this to protect him pg42-48(Arthur Miller. Death of a salesman) Firestone(1979) says women’s liberation is therefore ’a struggle to break free from oppressive power structure set by nature and reinforced by man’. She believes that women must be liberated through destruction of biological oppression and this can happen through the development of reproductive technologies that will free women from their biological reproduction capacity.

In my opinion, marginalization and trivialization are phenomenons that exist in everyday life because it is believed that man are superior and women are inferior and this idea contributes thus they encourage marginalized and trivialization of women. Inequality and difference are also contributing factors because they give the impression that just because women and man are different based on their sex, women are believed to be incapable of a lot of things including decision making thus giving man the impression that they are able to rule or they are more capable of a lot than women.

Oppression is also a contributing factor because it limits women from doing things to their full capacity in that they live according to what they are stipulated to do and this oppression gives man the power to belittle women and to make them unimportant. I believe that equality meaning equal opportunities to both man and women is the best solution to stopping marginalization and trivialization of women. 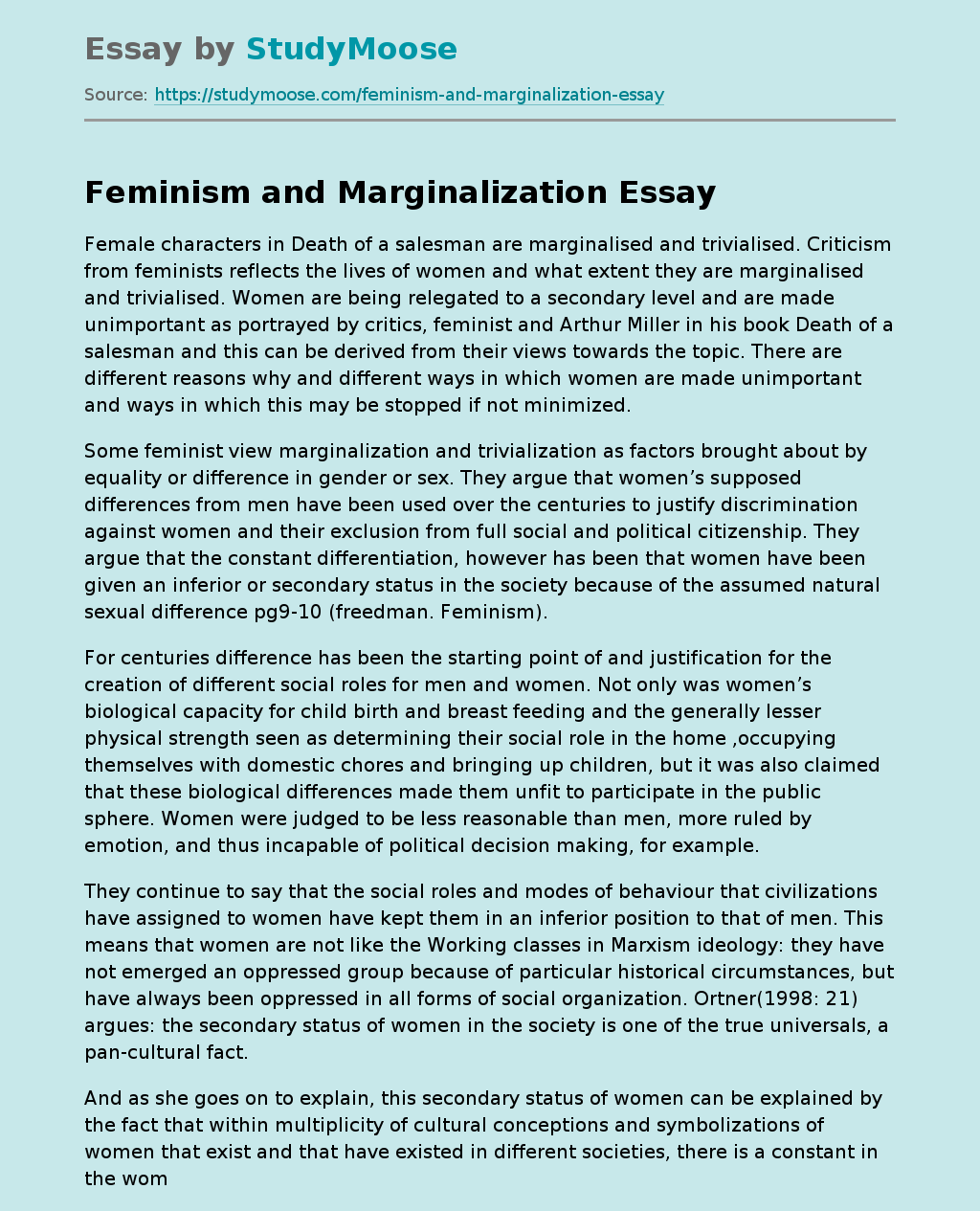