Femicide in Guatemala “Six women and girls were killed in Guatemala last week in one day alone. Two of the girls, about 6 and 12 years old, were found strangled to death in a street in the capital Guatemala City wearing their pajamas” (Moloney 1). Guatemala has the third highest rate of Femicide in the world. Femicide is defined as the killing of a woman by a man because she is a female. In Guatemala, a significantly high number of femicide cases have been reported and I strongly believe that this is a very troublesome and unhealthy issue for the population.

Don't use plagiarized sources. Get your custom essay on
“ Femicide in Guatemala ”
Get custom paper
NEW! smart matching with writer

More than 3800 females have been murdered in Guatemala since the year 2000 and this is just the official number. This clearly suggests that numerous innocent women are tortured and killed by men each day throughout the region. Another report suggests that 512 women were killed between January 1 and October 16 in the year 2012 alone and this is after a 10 percent decline from the previous year. (PCUSA, 1) Most of these cases were reported in the province of Guatemala, which includes the country’s largest city and capital.

The fact that this number is still so high despite the drop suggests what an urgent issue this is.

There are various reasons for this violent victimization of women throughout Guatemala and is becoming an increasingly pressing issue which needs serious attention. It has been reported that this region is one of the unsafe areas in the world for women. Each day countless women are raped, mutated, forced into sexual slavery and abortions, sterilized and murdered.

This creates a sense of fear among the entire population and makes them more submissive to this brutality. Men and women throughout the country live their lives in immense anxiety and stress of losing the women that they love.

One of the main concerns regarding femicide is impunity, meaning that most of these cases are not brought to trial. Reports suggest that only 1%-2% of femicide cases are prosecuted whereas criminals have a 98% to 99% chance of completely escaping any punishment or prosecution. This poses a huge problem because women don’t get the justice that they deserve and criminals easily escape. This is very unfair for the innocent women who are victims of such crimes because their offenders don’t receive the punishment that they deserve. Another main reason for this exigent issue is the inability of the

Guatemalan authorities to ensure the safety of women. This is to say that the Guatemalan government is so corrupt that they are unable to provide security for women and with the extremely high rate of impunity it is almost impossible for women to find justice. Now, it is very important to understand why these gender specific crimes exist in the region. One of the main reasons for this violent targeting of women goes back to the “Guatemalan government and military’s 36 year old genocidal counterinsurgency campaign against the country’s Mayan population” (Mychalejko 1).

This is to say that the reason behind this problem of femicide exists to destroy the intricate social bonds of Mayan communities. Additionally, “Gender violence not only terrorizes women in the community, but it also disrupts traditional patriarchal gender relations by sending the message to men that they are not capable of protecting women” (Mychalejko 1). I find this medium of using gender violence to target an indigenous population very disappointing. It is not ethical for a population to kill thousands of women in order to get even with a community.

Further, it is believed that this harsh behavior against women is really effecting the male population because such incidents happen so frequently that they are becoming insensitive to such incidents. Men in the Guatemalan society have become normalized to such reports and this can be seen because the crimes are continuing to become more inhumane and frequent. As mentioned above, one of the primary reasons for this ongoing violence against women is the Guatemalan Civil war, which left behind harsh memories of violence and impunity.

The increased militarization cause by the ongoing war on drugs also continues to contribute to these high femicide rates. Guatemala is one of the regions strongly involved in the drug trade and thus women are used as collateral damage in the battle between gangs. Additionally, the economic and political climate in the region is not very stable and thus the land a resource conflict also contributes to these innocent deaths. Lastly, it has also been found that the increased involvement of foreign governments, especially US and Canada play an important role in this violence targeted to women.

Basically, the Guatemalan government uses the targeting of women as a “tactical and deliberate tool of political repression (Mychalejko 2). In my personal opinion, not only is this very disturbing but it is also very unfair. Women play an important role in building a society and this unnecessary violence against them is very alarming. Using women as a bait to target the bigger economic and political issues is unethical and should not be practiced by any government. It is impossible for women to find hope and justice in a society where such high impunity exists.

This continues to be a never-ending cycle for thousands of innocent women who lose their lives, while the people responsible are let free. Overall this is an absolute shame and mockery of the system. The Guatemalan civil war really contributes to these high rates of gender violence in the country. The aftermath of the war left more than 200,000 Guatemalans murdered, most of who were indigenous. Also, thousands were raped, tortured, disappeared and displaced. The most disappointing part however, is that over 98 percent of the people who engaged in these war crimes were left free.

It is this lack of justice that left criminals in the country in power and innocent victims hurt. Therefore, these high rates of femicide are to inform the local population about this harsh past and to remind them that justice has not yet come. In conclusion, I think that we must all focus our attention to this increasing issue of femicide in Guatemala. In the recent times, as the political repression against women in increasing, they are becoming more active in order to prevent femicide.

For example, “In Guatemala it has been proven that as more women participate politically and socially, it brings out more repression. An example is the recent attempt on the life of [the aforementioned anti-mining activist] Yolanda Oqueli” (Mychalejko 3). Yolanda is a leader of FRENAM, a movement that aims to defend land from expansion activities. She was returning home from a peaceful protest when she was shot. I believe that this issue of femicide is one that needs immediate attention.

It is absolutely wrong and immoral to use a country’s women as a way of gaining political control. Additionally, the Guatemalan government is extremely corrupted and has a very high rate of impunity, which in turn, allows criminals to go free and possibly even commit the crime again. I suggest that the citizens of the world acknowledge this and do an intervention throughout the region. It is high time that women not be used as a bait to target men or to settle past scores. Women are an integral part of any society and deserve respect and security. 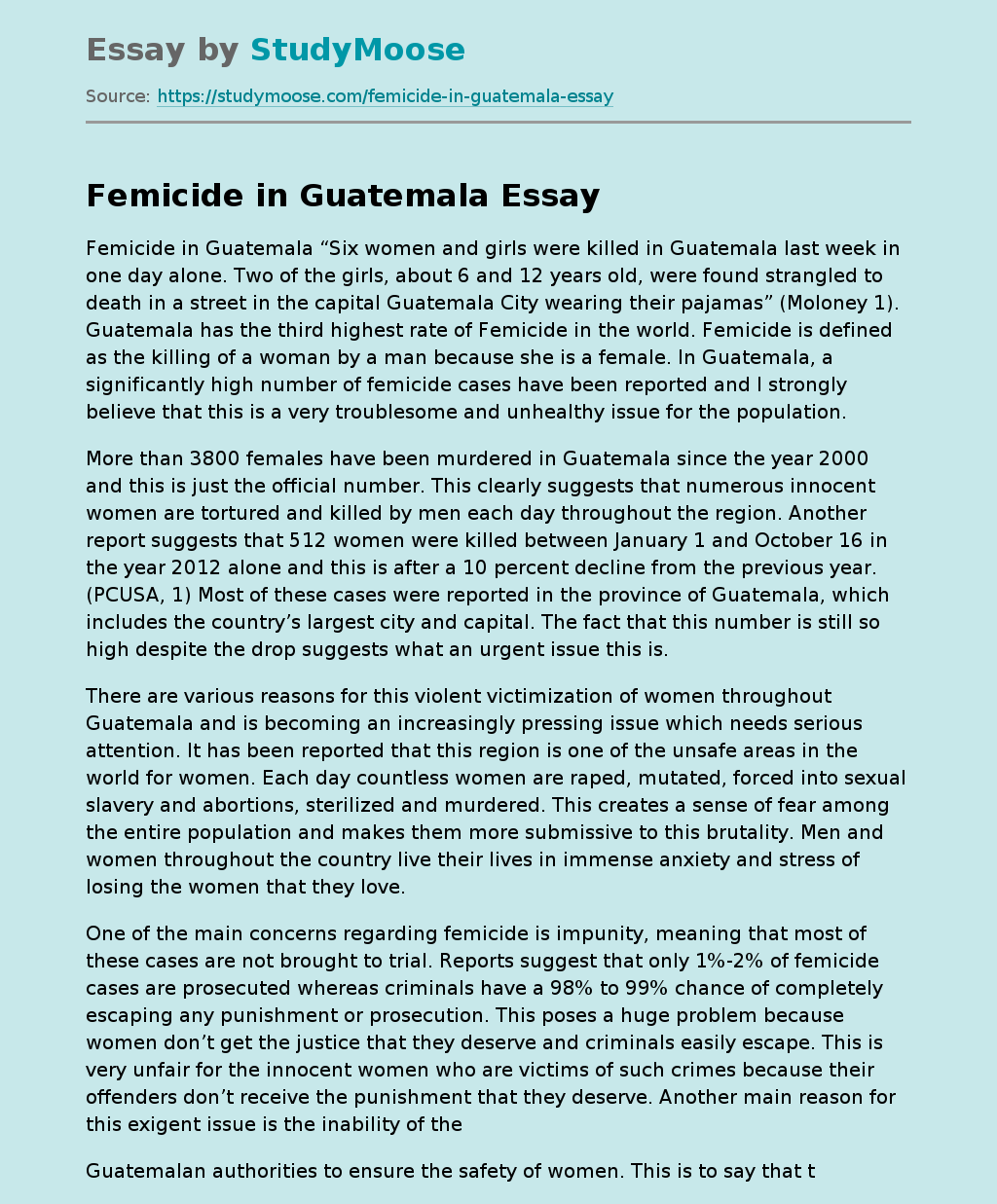