On December 7, 1941 there was a surprise attack on Pearl Harbor, Hawaii by Japan. The attack came from the Japanese, yet it caused unfounded fear in this country toward Japanese Americans. The book Farewell to Manzanar by Jeanne Wakatsuki Houston and James D. Houston depicts the reactions of the government and the American public toward Japanese Americans after the attack on Pearl Harbor. So why were they the ones punished for it?

We still see examples of inaccurate assumptions, hypocrisy, and discrimination during this time in our nation’s history that can be related to our own community since we continue to categorize, generalize and overreact.

The fear, hatred and racism directed toward Japanese Americans came out in different ways. A primary example was that Americans assumed the Nisei (people of Japanese descent who were born, raised and were living in the U. S. ), Issei (Japanese who were born in Japan, but were living in the U. S. ), and the enemy Japanese were all the same with respect to their loyalty for the U.

S. Many saw no differences between these three groups.

This is shown in the book when Mr. Wakatsuki (the father of author and main character Jeanne Wakatsuki) was interviewed by the Justice Department. The interview focused on a picture of Mr. Wakatsuki’s commercial fishing boat, which had two fifty-gallon drums attached. The Justice Department assumed he was using the drums to deliver oil to Japanese submarines off the coast of California. Mr. Wakatsuki was a commercial fisherman, and the drums were actually used to carry chum, which is fishing bait made of ground-up fish heads.

Even though Mr. Wakatsuki had received his American citizenship, the Justice Department wrongfully assumed that he was using his boat illegally simply because he was of Japanese descent. They questioned his loyalty to America. This was very hypocritical of the government because in America, as citizens, we supposedly all have equal rights and freedoms. When the government questioned Mr. Wakatsuki in this assumptious manner, they took away his rights and freedoms. In many communities today, an example of making assumptions would be the way people view carnival workers as potential troublemakers.

Another challenge Japanese Americans had to deal with was discrimination. They experienced this when only Japanese Americans were targeted and forced to move into internment camps. Jeanne and her family lived in one called Manzanar, near Independence, California. They stayed there for almost three years. Whenever a Japanese family boarded a bus headed for one of the camps, they were given a family number. This number was used by the camp officials to refer to the families. They weren’t even called by their names. This is an example of discrimination.

When the buses arrived at the camps, they were forced to live in barracks. These barracks were virtually paper-thin shacks put together with the least amount of effort possible, in order to finish them in time for the arrival of the Japanese Americans. Most barracks had very little living space. In the case of Jeanne’s family, there were sixteen people in a space about the size of a living room. They ate in mess halls and used latrines with no partitions. The American government treated the Japanese Americans as though they were prisoners of war in their own country.

The lack of minority residents in Livingston County would make it appear that minorities are discriminated against. The high cost of living means few minority residents can afford to live here. This could be described as passive discrimination. When Jeanne and her family finally do make it out of Manzanar, she was in the sixth grade and in a classroom of predominately white students. In the beginning, the teacher had simple expectations of her. Later, the teacher asked Jeanne if she wanted to read aloud for their reading lesson.

She agreed. After she was done, a little girl, quite innocently, said, “Gee, I didn’t know you could speak English. ” This was what the war, and being in internment camps did to the Japanese Americans. In spite of being American citizens, it made them look like foreigners in their own country. In the community of Fowlerville, there are people discriminated against. An example would be the community’s attitude toward people who live in mobile home parks. These individuals are often called “trailer trash”.

They are looked down upon because people think they’re from a low-income level and often thought to be involved in illegal activities. Some people may argue that The Japanese Americans deserved to be treated the way they did. This, however, is not true at all. They were Americans just like the rest of us, and if the constitution was really what we governed ourselves by, other Americans should have been ripped from their homes as well. The Japanese American’s mistreatment wasn’t fair, just, or called for by any means, and it should not have happened.

Although what the Japanese Americans went through was years ago, we still see examples of inaccurate attitudes of discrimination, and assumptions based on fear and outdated concerns today. It’s sad to say that even after having fought two world wars, this country still cannot overcome these issues. The First and Second World Wars were won, but the war against misunderstanding is still being fought. Maybe someday, when this war has been won, we can truly be considered the greatest country on earth. 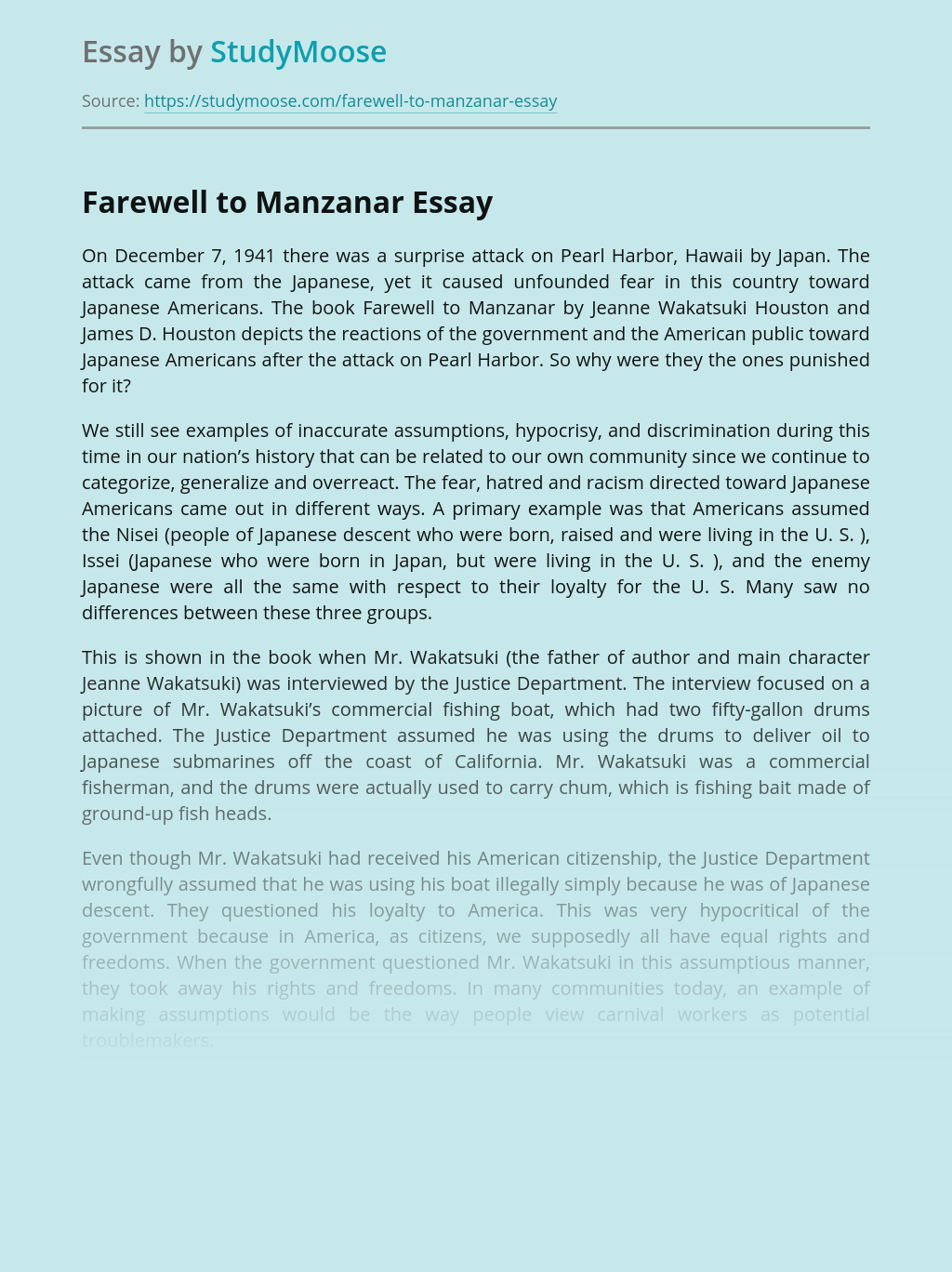