Factors That Lead to Passion Killing

Don't use plagiarized sources.
Get Your Custom Essay on Factors That Lead to Passion Killing Just from $13,9/Page

Wikipedia, the free encyclopedia defines passion killing as a criminal act in which the perpetrator commits a crime of murder against someone because of sudden strong impulse such as sudden rage or heartbreak rather than as a premeditated crime.

This despised end result where most relationships of nowadays head to, commonly known as passion killing is fueled, or caused by several factors. Some of these include socio-economic status, the need to have power over the other, selfishness, jealousy, insecurity, lack of understanding, poor communication, unfaithfulness, lack of direction, poor knowledge in what a person really wants in relationship wise and mental ill health in some cases. Gerson sindano, a master of arts in English student, in the department of language and literature studies, faculty of humanities and social science at the University of Namibia, wrote in the New Era news paper. He says that instead of looking for real love, some men are trying to buy love with money or any kind of riches or materials. He continues to give advice that this kind of love that is held or based on material items is dangerous to both the individuals involved in it. Therefore people should look for real and genuine love that will not disappear when the money will finish.

The end result of fake love is disappointments and loss of wealth; this also leads to the dilemma of passion killing, because a person will not accept losing his or her money or possessions and be left, hurt or disappointed at the end. Some people want something in return and if they are not paid or given their items back, the whole relationship that seemed to be full of love, happiness and joy, can turn into a nightmare. A relationship should be a fifty/ fifty [50/50] thing, where by both the people involved can express themselves freely, without fear of the other. A problem comes in when one individual in the relationship opts or desire to have control over the other or to have power over the other. This control or power can be influenced by physical body structure in men, and success in women. Men are believed to be naturally stronger or powerful than women, and due to that they want to control women to do their desires instead of doing what they want; of cause resistance is always experienced in such situations. Clinical psychologist Dr. Shaun Whittaker spoke to the Windhoek observer and said that, we live in a male dominated country, where the men still have power and continue to will to have power over women.

Due to this, men are controlling their women and if a woman resists doing the will of the men, there is always violence against the woman. Women who are very successful than their man, also opts to have control on the men, and this is often not welcomed by men because they will appear weak if they are to receive orders from their female counterpart. The violence that result from the rejections of being controlled is always assaults and in some cases this may lead to passion killing. Of cause respect should be there in relationships but having control over the other is different from respect. Therefore its only wise if the men can gain respect the correct and humanly way, instead of applying force. Jealous in relationship terms, is referred to as the real or perceived threat of the loss of a valued relationship to a rival, in most cases men do not know how to control their emotions and anger especially when it comes to their relationships or the women they love. Jealousy crops in when one of the individuals in the relationship is no longer having interest or is getting involved with someone else.

When there is jealous, an individual begins to feel low and unappreciated; this leads to people becoming frustrated and unhappy. In most cases men are not able to control their anger and they find it hard to believe that another man is taking over, since they don’t want to be seen weak or to be undermined, they plan to commit a crime and this crime is always murder. Insecurity is defined as the feeling of not being secure or having thoughts that your partner is seeing someone else, this is mostly brought about when a person has a history or believed to have not been faithful in their past relationships. Insecurity is also caused when there are suspicious changes in an individual’s life, changes like limiting or cutting off some other activities you use to do together, or when a person becomes too social with another person of the opposite sex and with only one individual This causes people to react differently and in other cases some people chose to commit crimes. Some people are too jealous to the point that, they never want others to succeed, or they don’t want their partner to be involved with another person, they always use an excuse like; if I can’t have you then no one will have you! When situations get to this extent, it means that they are ready and willing to commit a crime, this crime is always have to be murder.

Mental ill health is a situation where by an individual suffers from a mental illness, such people are not able to control their anger and in some cases they don’t consider crime to be a bad thing. People, who are mentally unfit, don’t hesitate to commit a crime and if they get angry, they use any object in their way to assault or cause harm to other people. In relationships, when a mentally ill person is tempered with, they usually consider to solve problems in a violent way instead of solving problems the polite way. When they become violent, they can end up commit a crime and even murdering their partners. In this way the crime of passion killing has been fulfilled. Even though not necessarily possible, selfishness is another factor that leads to passion killing. The whole world believes that love is always accompanied with giving and receiving, it does not matter when you receive or give, for as long as it is there then life and love becomes real for other individuals. The honest truth is that, love is from the heart and not from the materials that other people can offer so for a person to be more concerned with receiving or giving then it means that such a person doesn’t know what they want.

Focus is lost if a person is looking at receiving or giving in a relationship, the idle way is to be in a relationship with someone for who they are and not what they have, what they do, where they come from. Some people feel unwanted or think that they are being robbed due to the fact that it’s only them that give, so at times arguments and disagreements break out to the point that people begin to apply violence against each other. Men are stronger than women and so they can easily hurt their partners. Socio-economic status, lack of understanding, poor communication, lack of a clear direction, poor knowledge in what a person really wants relationship wise, are also some of the factors that can possibly lead to passion killing in relationships if not addressed wisely or professionally. These factors can be avoided and lives could be saved if people try with all their best to control themselves and try to understand that disappointments or rejections are part of life and therefore one does not need to commit a crime when they occur. In conclusion, the above discussed are some of the factors that are believed to possibly lead or contribute to the occurrence of passion killing in relationships.

This crime-related article is a stub. You can help Wikipedia by expanding

Factors That Lead to Passion Killing. (2016, Mar 11). Retrieved from https://studymoose.com/factors-that-lead-to-passion-killing-essay 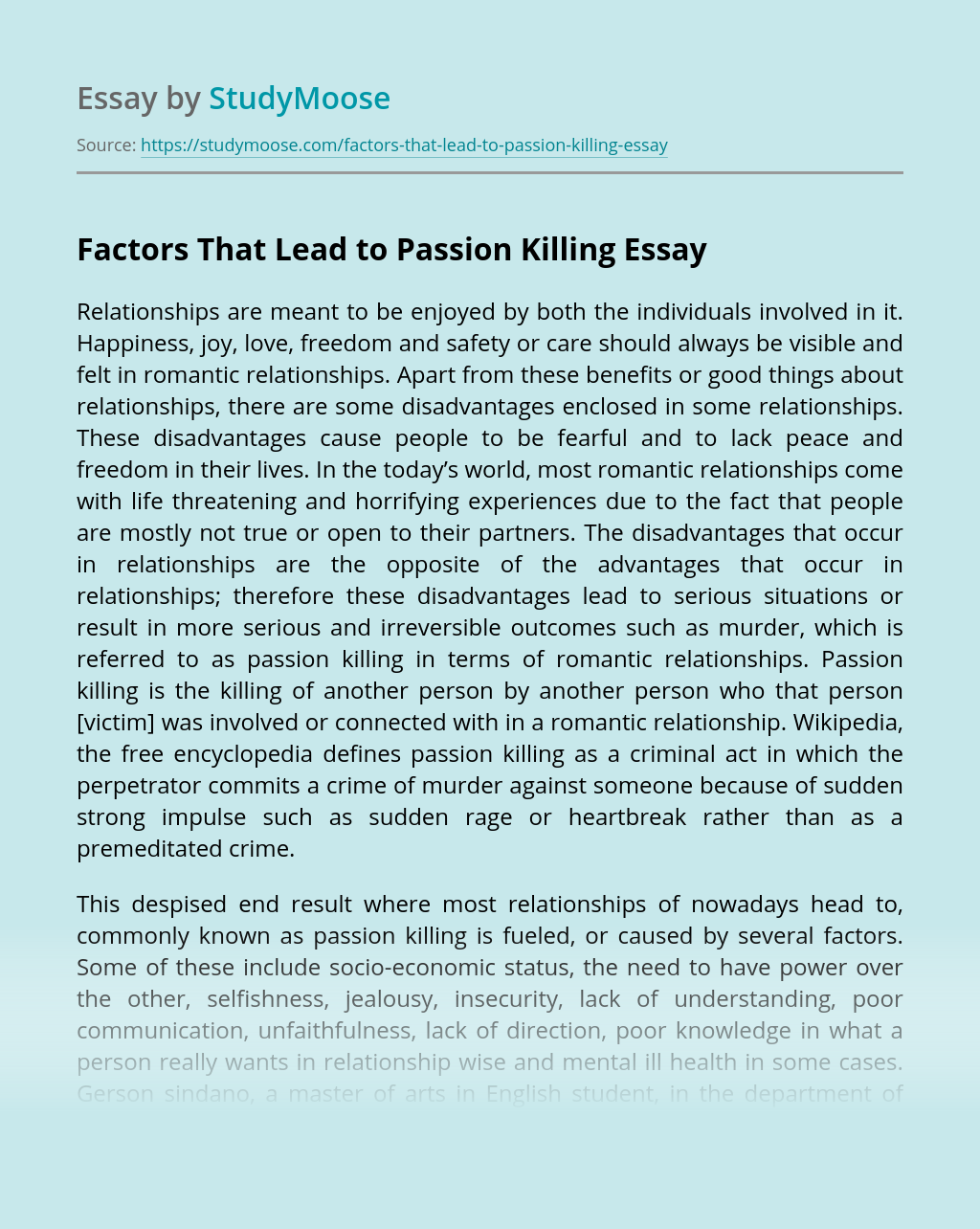 Criminology as described in an institutionalised setting is considered as an outside view of habits which results in defining criminal offense as an intentional behavior that can be penalized by the state. Our text discusses criminal offense as any offenses that happens against the law. Crime is considered a social problem therefore it is studied...

Get Essay
Let the Punishment Fit the Crime

If you can’t do the time don’t do the crime or how about let the punishment fit the crime. These two statements have been around for years. If someone commits a crime they should be punish but to what extent? Should similar crimes be dealt with the same? Such as if a person had a...

Solution to War on drugs

Abstract The War on Drugs is extensively regarded as a requirement in the present society that has been laden with the burden of drug abuse, addiction, rehabilitation and increased crime rates due to drug abuse. War on Drugs has remained a deep rooted contentious campaign that has been debated over and over for several years...

Introduction Twenty-five percent of the world’s prison population, 2.5 million people, are held in American penal institutions. (ACLU, 2008). Sixty percent of those incarcerated are racial and ethnic minorities. These figures mean that 2.3% of all African Americans are incarcerated. The percentage of whites admitted to prison is 0.4% of whites and Hispanics, 0.7%. (Associated...