Evil Can Only Be Overcome by Good

Evil in the context of this essay refers to moral evil, which is evil that we as human beings originate through our thoughts and subsequent actions. ‘The greatest bulk of human suffering is due either wholly or in part to the actions or inactions of other human beings’. The problem of evil is a serious and enduring challenge for religious faith, as Romans chapter 12:21 states ‘Do not be overcome by evil, but overcome evil with good’.

In this the final verse of the chapter, there is an underlying promise that good will eventually triumph over evil, as Paul encourages Christians to not allow evil to overwhelm them but instead to play their part in overcoming evil through doing good.

Don't use plagiarized sources. Get your custom essay on
“ Evil Can Only Be Overcome by Good ”
Get custom paper
NEW! smart matching with writer

In modern culture, for example, violence is met with counter violence, injustice with force; the pervasiveness of sin and evil is such that we are compelled to wonder whether the darkness has eclipsed the light. In essence, forgiveness is the means to overcoming or conquering evil by unlearning and breaking the habits of sin and stopping cycles of violence and vengeance.

Habits and practices of forgiveness in the service of holiness, is a way of unlearning sin and evil in general and violence in particular. Embodying forgiveness is the way that offers new life and a hopeful future to those who suffer and to those who inflict suffering. This essay will examine the practice of forgiveness as a way of healing brokenness, being healed by God and by others. The question then is, what is forgiveness? Forgiveness is a process of ‘letting go’, that is not allowing the negative experiences of the past to dominate the future.

Let the past shape the future positively’. From a Christian’s perspective, forgiveness is not so much a spoken word, a feeling felt or an action performed; it is an embodied way of life in an ever-deepening friendship with the Triune God and with others. Due to the persuasiveness of sin and evil, forgiveness must be an expression of commitment to a way of life, one of holiness in which people cast off their ‘old’ selves and learn to live in communion with God and with one another.

It is also a means of seeking reconciliation in the midst of particular sins and specific instance of brokenness. In the broadest context, forgiveness is the way in which God’s love moves to reconciliation in the face of sin. Forgiveness is the only possibility for preventing the consequences of sin from “eating away” at us; it rescues and restores what can still be rescued. An endless chain of evil can be broken by a single act of forgiveness. Why then is forgiveness such a difficult practice?

The forgiver, who is also sometimes the victim is overcomed or overwhelmed by evil and has to wrestling with feelings of hatred, aggression and revenge, but the action of revenge will perpetuate the current of evil, rather than containing it. Forgiveness is then required but is only possible through God’s grace that comes over the one who has been wronged (the forgiver), persuading him to be an instrument of reconciliation and renewal. It’s important to note here, that there are however two types of grace in the central Christian message of forgiveness of sins; Cheap grace and Costly grace.

Cheap grace is the preaching of forgiveness without requiring repentance, baptism, without church discipline, hence it is grace without discipleship, grace without the cross and grace without Jesus Christ. Cheap grace, which is the emphasis in today’s western culture, denies any real need for deliverance from sin since it justifies the sin instead of the sinner, in effect, it offers consolation without any change. This cheap version of “therapeutic” forgiveness create the illusion of caring about the quality of human relations while simultaneously masking the ways in which people’s lives are enmeshed in patterns of destructiveness.

Costly grace is the sanctuary of God, it is discipleship and it is following Jesus Christ. Costly grace requires practices of forgiveness, repentance, confession and love for enemies. It must form part of the practices of the Christian community and life. At the heart of forgiveness, it is also important to learn to be forgiven, as there are people who see themselves as unforgiven. Being forgiven frees us of the burdens of the past and also deepens our relationship or friendship with God and each other. It is the journey towards holiness.

At the centre of Christian forgiveness is the proclamation of God’s Kingdom and the call to repentance so that we can live as forgiven and reconciled people with God and with one another. In other words we are enabled by Jesus’ forgiving love to forgive others because we learn to understand ourselves as sinners who have been forgiven. There is a need for people in general and more specifically in the church, to learn to become more forgiving in their relationship with each other; but the need to also learn what it means to be forgiven by God and by each other must be embodied.

To be forgiven by God does not come apart from an acknowledgement of and confrontation with, human sin and evil He does not overlook or ignore our destructiveness, rather God confronts sin and evil in all of its awfulness. In doing so, God exposes our wounds, both those that have been inflicted on us and those we have been inflicted on others and on ourselves, for the purpose of forgiving us and healing our wounds. Confrontation is important, as it can illustrate the importance of forgiving but not forgetting because in trying to forget the past, unconfronted sin and bitterness find ways to influence people’s lives.

Evil Can Only Be Overcome by Good. (2017, Jan 22). Retrieved from http://studymoose.com/evil-can-only-be-overcome-by-good-essay 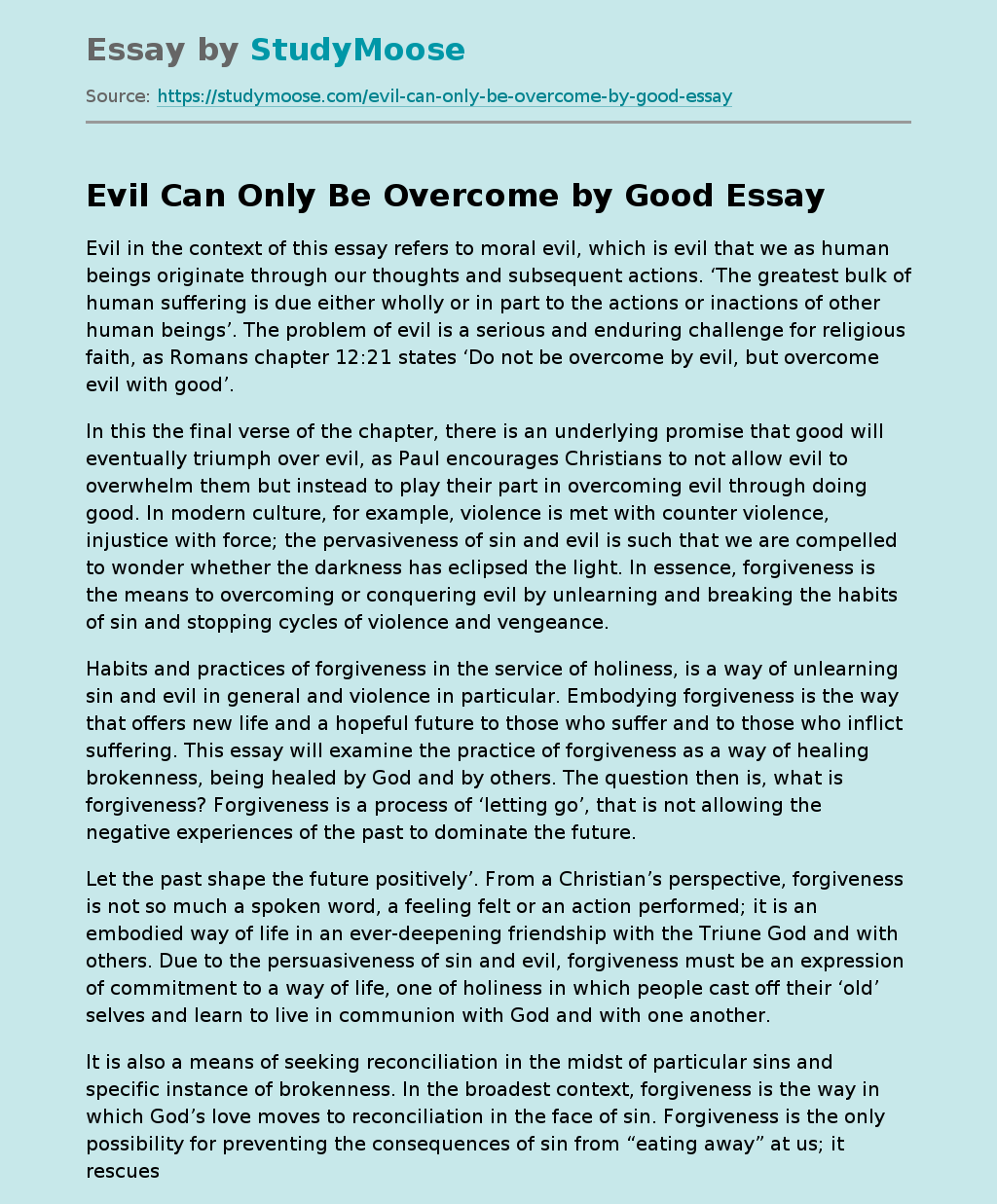