Ethics in Environmental Conservation and Research

Ecological ethics originated from environmental ethics which, just like the Blackstone’s ethic of environmental rights and the utilitarian ethic of pollution control, focuses on the complex issue of human-nature relationship and the resultant environmental problems which include loss of biodiversity, pollution and scarcity of resources (Minteer & Collins, 2008).

Don't use plagiarized sources. Get your custom essay on
“ Ethics in Environmental Conservation and Research ”
Get custom paper
NEW! smart matching with writer

Ecological researchers emphasize that although human beings arevery important in the human-environment relationship, they must evaluate the benefits of their actions vis-a-vis the negative impact of such actions.

Human beings must not harm the environment knowingly, particularly if the action leading to such harm is not necessary.

Ecological ethics holds that the non-human environment is valuable and mankind must protect it. Blackstone viewed access to a clean and safe environment as a fundamental human right, meaning that no one should take away or compromise another’s right to a livable environment (Valezquez, n.

d). At the core of Blackstone’s ethic is the argument that human beings must gauge and anticipate the impact of their actions to ensure that such actions do not threaten other people’s access to their environmental rights.

Although Blackstone failed to give a clear guide on how it should be done, he argued that polluters should be held responsible for their actions. Non-human life is useful to human life as humankind depends heavily on the former to satisfy their needs. As such, human beings should protect the non-human environment and only assault the non-human environment to meet essential needs. According to the utilitarian ethic of pollution control, environmental problems are pointers to defects in the market.

Utilitarians argue that human beings should invest in reducing pollution to the minimum possible, as it is harmful to the welfare of society. This implies that resources should be used when necessary and they should be allocated and used efficiently. According to Valezquez (n. d), utilitarians draw a line to separate the costs firms incur to produce a product (private costs), and the costs incurred during the production process but which the firms do not pay directly (social costs).

These include the costs of pollution and health-care costs for pollution victims, and biodiversity loss. When firms consider only the private costs and overlook the social costs, resources are not utilized efficiently as firms do not invest in efficient production systems. The result of inefficient use of resources is wastages and pollution which contravene the very utilitarian principles on which the market system stands. Producers should therefore consider both social and private costs to arrive at the real prices for products.

A prominent problem with setting the real price is that many firms are responsible for pollution and it is not easy to determine which firm is harming who and which is not. The most adequate of the three views is the ecological ethic. Ecological ethicists view mankind as part of a larger system which involves continuous interactions with the non-human environment. Mankind therefore stands to lose from environmental degradation and scarcity of resources. The utilitarian and Blackstone’s views may imply that mankind can justify environmental destruction by paying for the same and compensating those who are affected.

According to the ecological view however, human beings have the important role of, not simply paying for harm occasioned by their actions but of, protecting the environment from harm and ensuring that harm is tolerated only when the benefits outweigh the adverse effects. References Minteer, B. & Collins, J. (2008). From Environmental to Ecological Ethics: Toward a Practical Ethics for Ecologists and Conservationists. Sci Eng Ethics 14: pp 483-501. Swart, J. (2008). The Ecological Ethics Framework: Finding our Way in the Ethical Labyrinth of Nature Conservation. Sci Eng Ethics 14: pp 523-526.

Ethics in Environmental Conservation and Research. (2016, Sep 22). Retrieved from https://studymoose.com/ethics-in-environmental-conservation-and-research-essay 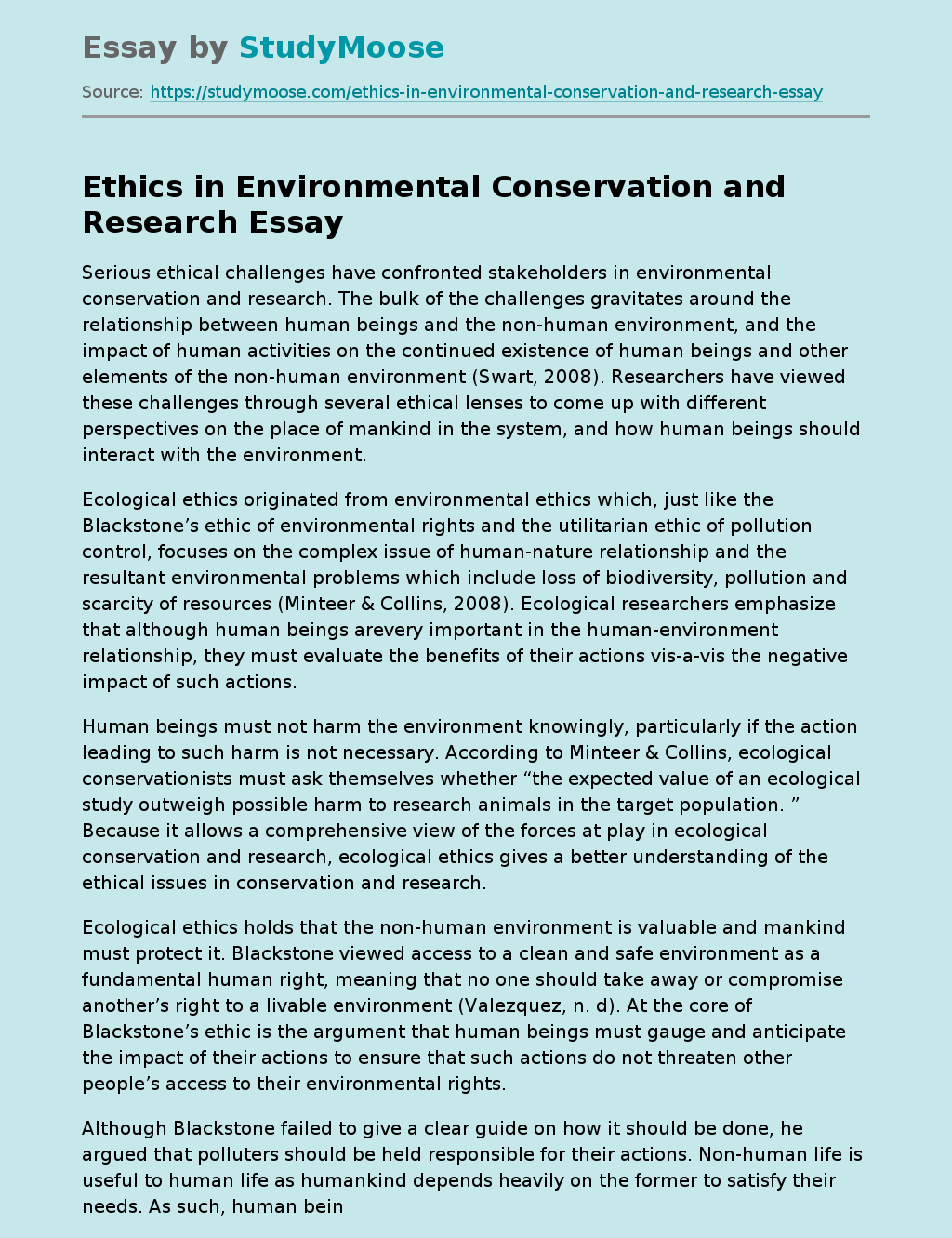