Megan did not have a bright attitude towards school. She was always not looking forward to studying because she has problem coping in school. Whenever they bring in a new topic, she sighs heavily knowing she would take a long time to understand it even though it is considered an easy topic to the rest of the class. She was always positioned last in class and having a mere fifty-five percent and below for her percentage in exams and tests. Her position in level is one of the bottom few.

Don't use plagiarized sources. Get your custom essay on
“ English Personal Recount ”
Get custom paper
NEW! smart matching with writer

She did not like being in a school filled with intellegent students.

Her teacher, Mrs Tay, had asked the class to prepare a short speech to say in front of the class on what they want to be when they grow up and what are they are going to do to achieve their goal. Most of the students had said that they want to be a doctor, a lawyer, a banker or even an Army Sergent.

Many of them had bright futures waiting for them. They all wanted to complete their Masters and futher their education abroad.

When it came to Megan’s turn, she look down into her script nervously and read out her speech. She was hesitant to speak the truth but she decided that she should not be embarrased as she too has embitions. She wanted to be a veternarian to help cure sick and needy animals as she had once lost her dog in a car accident.

Many of her classmates were shocked. They did not expect a weak student to have high embitions. After speaking out, her classmates shouted from their seats, saying she can do it. Mrs Tay gave words of encourangement which made her delighted. After class, Megan went up to Mrs Tay. She asked her if she could have one-to-one sessions with her to help her. Mrs Tay gladly took her under her wings.

As months pass and her PSLE finishing, Megan made an increasing improvement. She was now confident in her work, partake in class work and volunteer to help others. Teachers were saying among themselves that she has changed into a positive and outspoken person unlike before. She was the role model of many students in her school.

When the day of the results of the PSLE came, Megan was confident. She knew she had done her best regardless of her aggregate. Mrs Tay passed to her her certificate and it shows A for most of her subjects. Megan jumped for joy and many of her friends went up to her to congratulate her. Her effort paid off. If she had not shared her embitions, she wouldn’t be excelling in her subjects.

One of my most recent memories is the authentic experience at the mall with three of my friends, Eunice, Wing Kit and Cheng Ye. We went there to buy a gift for Cheng Ye’s cousin, Claire, from abroad, whom he has not met in a long time.

She is aged 14 years old, her favourite foods are ice- cream and sushi, and her hobbies are sleeping, swimming, cycling, running, and listening to music. She is also more of a sporty and hardworking person. She likes playing on her phone, the colour PINK, using social media such as whatsapp, facebook to socialize. She dislikes computer games and the colour blue.

Cheng Ye has not seen Claire in quite a while, and Claire has not visited Singapore in ages, we have decided to get Claire a gift to welcome her. Thus we decided to go to Tampines Mall as there is a wide variety of shops there. Our budget is $50.

When we reached Tampines mall, it was very packed with shoppers, were lugging huge shopping bags. The mall was filled with the noisy sound of people chattering and laughing. It was so noisy that I had to shout and strain my voice to talk to Eunice, who was just right beside me. Salespersons were announcing the various offers they were having. The smell of curry chicken entered my nostrils as I while gazed at the patrons savouring the mouth-watering curry chicken, causing my mouth to drool as we walked past the restaurant.

Finally, after browsing through many electronic stores, we decided upon an pink shiny earpiece from Courts that costs $20.

We chose the product based on her preferences as she liked pink and shiny objects and also because it had a reasonable price and was within our budget.

After buying the earpiece, we were left with $30. Thus we decided to get her another gift based on her hobby of sports. We wanted it to be within our budget of $30, the colour pink and it to be useful and long-lasting.

Eventually, we headed down to the ‘ Royal Sporting House’ and chose a pair of pink as it would be useful to her as swimming was her favourite hobby which she did pretty often. Thus, she would be able to use it often as well.

In conclusion, this experience of going to Tampines Mall on 29 March 2014, was a wonderful experience.We had a lot of considerations at first, such as her personality,likes & dislikes, the budget for the gift and what gift would she really wanted. However, all of us worked together, communicated effectively and overcame the challenges. So, eventually we decided on the gift.

I also think that this experience was an educational and enriching one, as we learnt how to decide on things in a group without having any conflicts and how to take things into considerations before making a final decision.

In conclusion to this, this experience was a fun, educational and enriching experience. 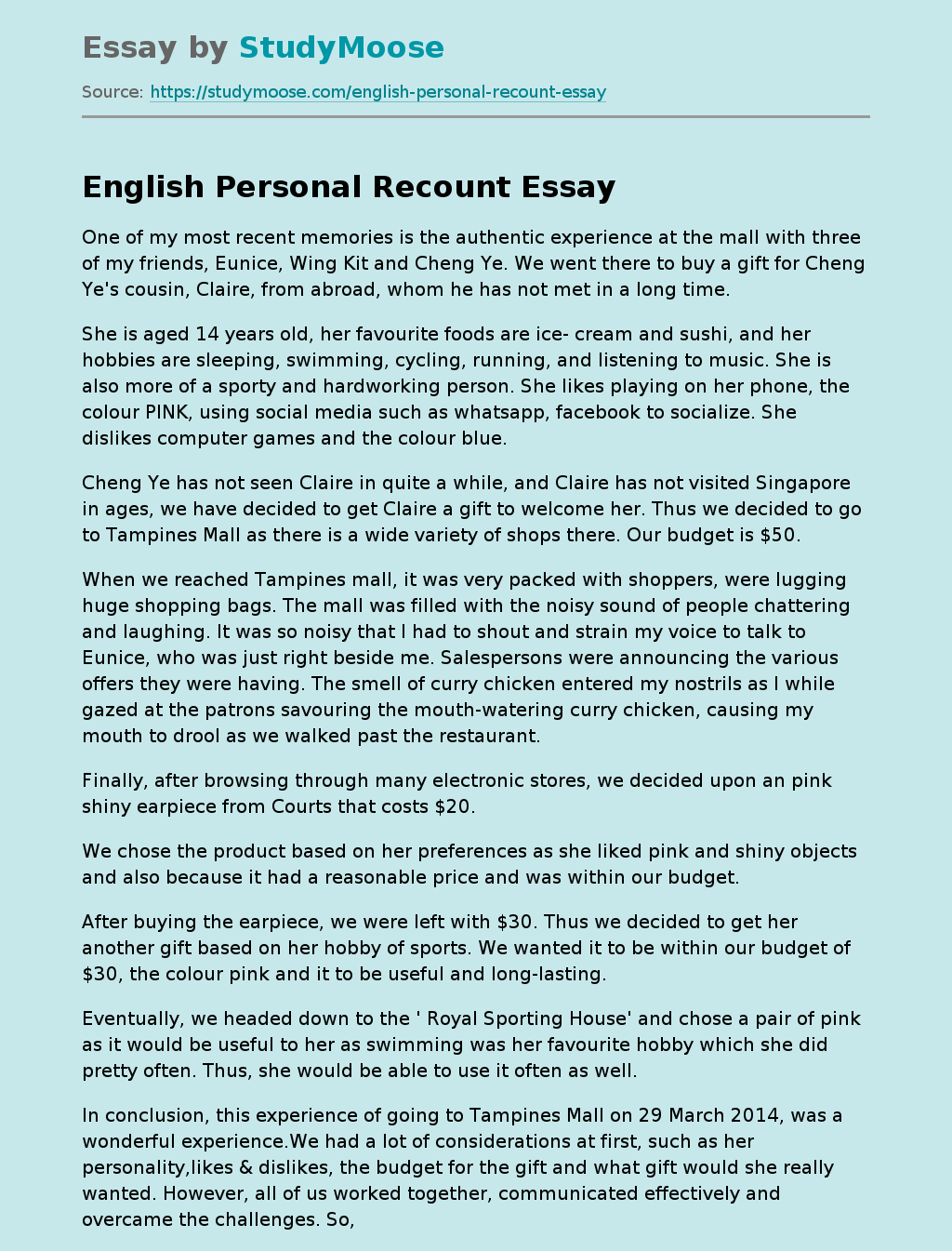