Hardy shows a various amount of thoughts, feelings and concerns throughout the ‘Veteris Vestigia Frammae’ section of his poems. These emotions always differ depending on the memory he is recalling to the place where it took place and even general differences between the way he feels about his late wife, Emma. To start with in the first poem ‘The Going’, Hardy shows feelings of guilt and blame towards Emma.

The first line of the poem, “why did you give no hint that night” straight away shows that Hardy is blaming Emma for her own death when she didn’t even know herself that she was going to die just that she was quite ill.

Don't use plagiarized sources. Get your custom essay on
“ Emma Gifford Poems ”
Get custom paper
NEW! smart matching with writer

In this poem Hardy doesn’t show guilt straight out but he does it by asking many questions in the poem but never giving any answers, it seems as if he doesn’t, maybe even can’t explain the way he feels due to Emma’s death.

Another emotion shown in this poem is resentment, resentment for the fact that they did “not speak” and she died without him being able to say what she meant to him.

‘I Found Her Out There’ is also one of Hardy’s poems that shows many emotions and some concerns of his about where Emma had been buried. Hardy’s main concern is the fact that he wants Emma to be in her childhood home of Cornwall where she loved to be but instead she is buried in Wessex where they lived.

In the poem Hardy says that he wants Emma to be “where she once domiciled”. This shows that Hardy wanted Emma to return to her home where she once was as he knows that she enjoyed her life there more than what she did in Wessex. Hardy uses the word “creep” to describe the way Emma would move underground, this seems to be an odd word to describe how the woman you love would move.

In this case it seems as though he uses it to express his regret and how morbid it is without her but also morbid for him to remember that she loved Cornwall more than him and he knew that that was where she belonged no matter what. Hardy also uses to word “shade” to represent Emma’s soul which also seems a little strange as it would be her soul that would move if anything was going to not her shade which to me means her shadow as she doesn’t have one now. This to me represents that Hardy can’t and maybe don’t want to believe that she has gone and he will never be able to make things better between them and make her happy like she once was.

“Without Ceremony” is also a good poem that shows a lot of Hardy’s emotions as I think it can be seen as his way of having a break down as he is being haunted by the past. This poem is addressed to Emma which shows that it means a lot to him and is rather sentimental but also it shows how strong and powerful his words are and how much they generally mean to him. The very first line shows affection as he calls Emma, “my dear”, this however is not the way it was when she was alive. We can see from this that either he is imagining things or is wishing how could have been.

The poem to me shows a confession from Hardy as he says a lot of things that he never got a chance to say to her but always wanted to but also he lets out some of his grief and regrets. It also shows slightly how it used to be for them being together but never being with each other. For example, “before I had thought thereon” showing that he neglected her and wasn’t there for her even when she needed him to be. Hardy even went as far to say that he “inferred” which to me is him telling himself that it wasn’t all his fault but he is also questioning if they acted like a couple when they were around others but went their separate ways when no one was around.

The last line of the poem, “Good-bye is not worth while!” is a very strong statement to finish on. This can shows a number of thoughts and feeling from Hardy, it could mean something as simple as it is exactly what Emma did as neither of them said bye. But it could also mean how much of pretence their relationship was and how little it meant to Emma in his eyes. Lastly it could show his grief and regret of loving her but not being in love with her, as it shows that he had more to say to her and wished that he could now so to him for not doing that he doesn’t deserve a good-bye from her. 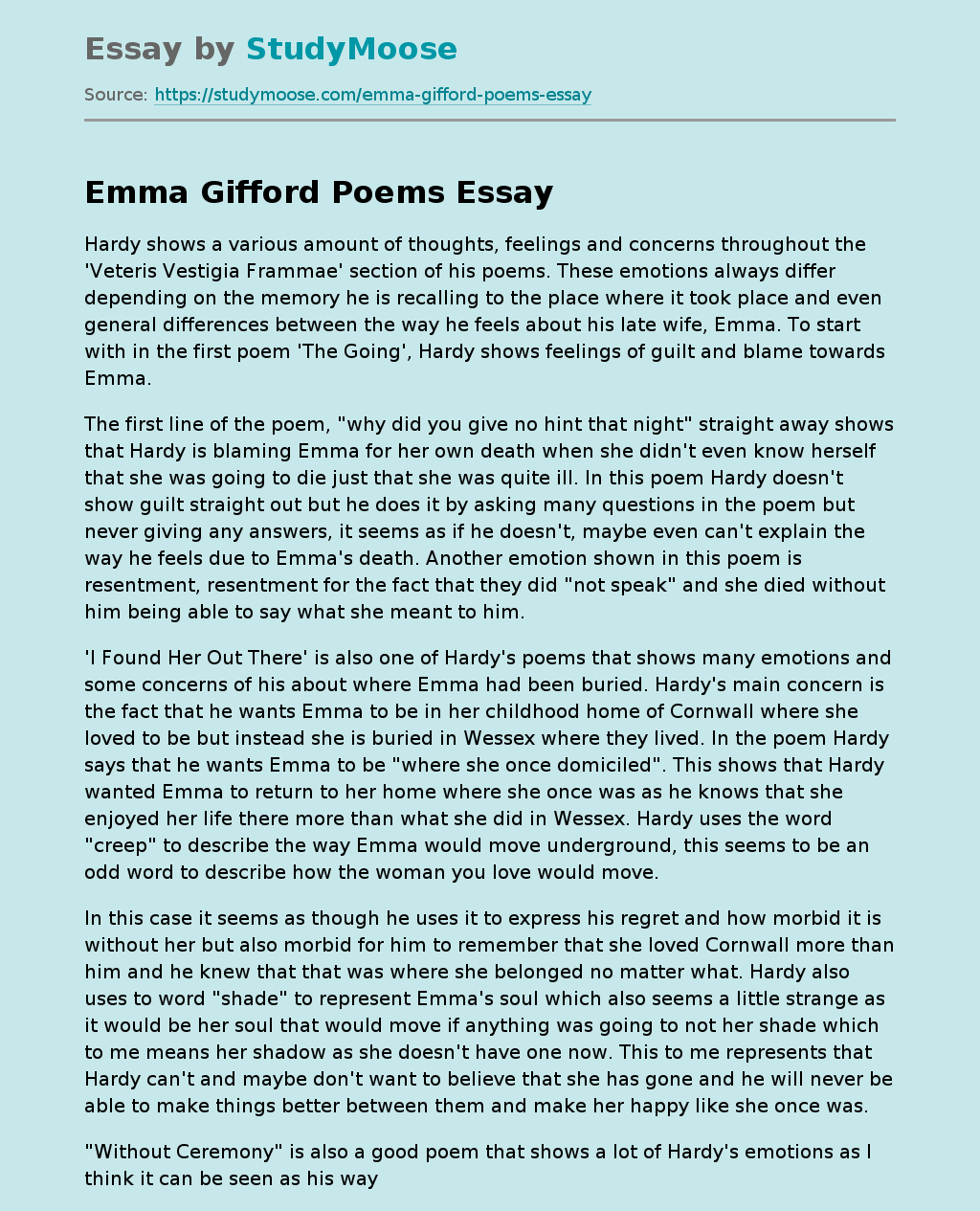