The danger posed by Arc Flash incidents as well as their relative frequency of occurrences has led to greater concerns by various stakeholders in the Electrical industry. Wellman, & McClung, (2003) defines Electric arc flash (also known as arc blast) as an electrical explosion which occurs as a result of electric current passed through air when the insulation or isolation between two different conductors is no longer capable of holding the current. If high level of current is involved, tremendous amounts of radiant energy are released often causing substantial damage to property and/or injury to electrical workers.

Don't use plagiarized sources. Get your custom essay on
“ Electric Arc Flash ”
Get custom paper
NEW! smart matching with writer

Several causes of electric arc blasts have been documented. Most cases occur when a worker confuses energized equipment for a de-energized one and unknowingly starts operating the equipment. It may also result from loose connections of an electric circuitry, overheating, frail wires, insulation breakdown, mishandling of equipment such as when a worker drops or mishandles an electric equipment. The intensity and duration of different cases of arc blasts vary.

The intensity is fundamentally determined by the magnitude of current causing the fault, while the duration is determined by the time period between the fault and the action of a protective device in interrupting the fault. Knowledge of the intensity and duration of an arc flash are imperative for the calculation of incident energy that a worker may be exposed to and are the fundamental considerations in the guidelines drawn by different agencies, S&C, (2008). Weigel, (2008), reports that on the basis of hospitalization records, approximately five to ten arc flash explosions are experienced in workplaces in the United States daily.

IEEE gives a similar report asserting that 2000 arc-flash related burns are treated annually in the United States. The likelihood of an individual being exposed to arc flash is determined by; the condition of the tools in use, duration of exposure to live equipment, complexity of the duty involving electric equipments, experience of the worker and a worker’s mental and physical preparedness to the task and conditions of the power system such as probability and extent of power fluctuations. Injuries resulting from arc flash exposure are serious in nature some resulting into death.

Other injuries may include damaged auditory system or eyesight and most prevalently severe burns. Properties, mostly electrical equipment, of significant value are often destroyed as a result of arc blasts. Cumulative cost of expenses in one arc flash accident may reach up to $10 million in the US alone, Wellman, & McClung, (2003), Weigel, (2008) puts the figure to be between $8 million-$10 million. Lippert, Colaberardino, & Kimblin, (2004). notes that in the United States, four regulatory measures are in place to govern and control incidences of the arc flash hazards.

Electrical safety for workers is under the jurisdiction of Occupational Safety and Health Act (OSHA) with standards 29-CFR, part 1910 specifically addressing Arc Flash related safety practices. The Institute of Electronics and Electrical Engineers (IEEE) 1584 which has the responsibility of performing arc blast calculations, important in the preventions of blasts. National Fire Protection Act (NFPA) 70E offers the standard safety requirements of employees working conditions, besides serving to ensure that electrical equipments are in optimal conditions.

Proper understanding of the causes and hazards of arc flash is the key to a reduction and prevention of accidents and injuries. Better trained workers, cleaned and well maintained equipment, use of corrosion resistant terminals, insulation of exposed electrical conductors, ensuring that all circuit breakers are in optimal operational conditions and providing workers with electric arc flash protective clothing are some of the precautions that may be put in place to significantly reduce arc flash exposure, Hartman, (2004).

Furthermore, workers should be equipped with basic technical information to help protect them from electrical explosions. 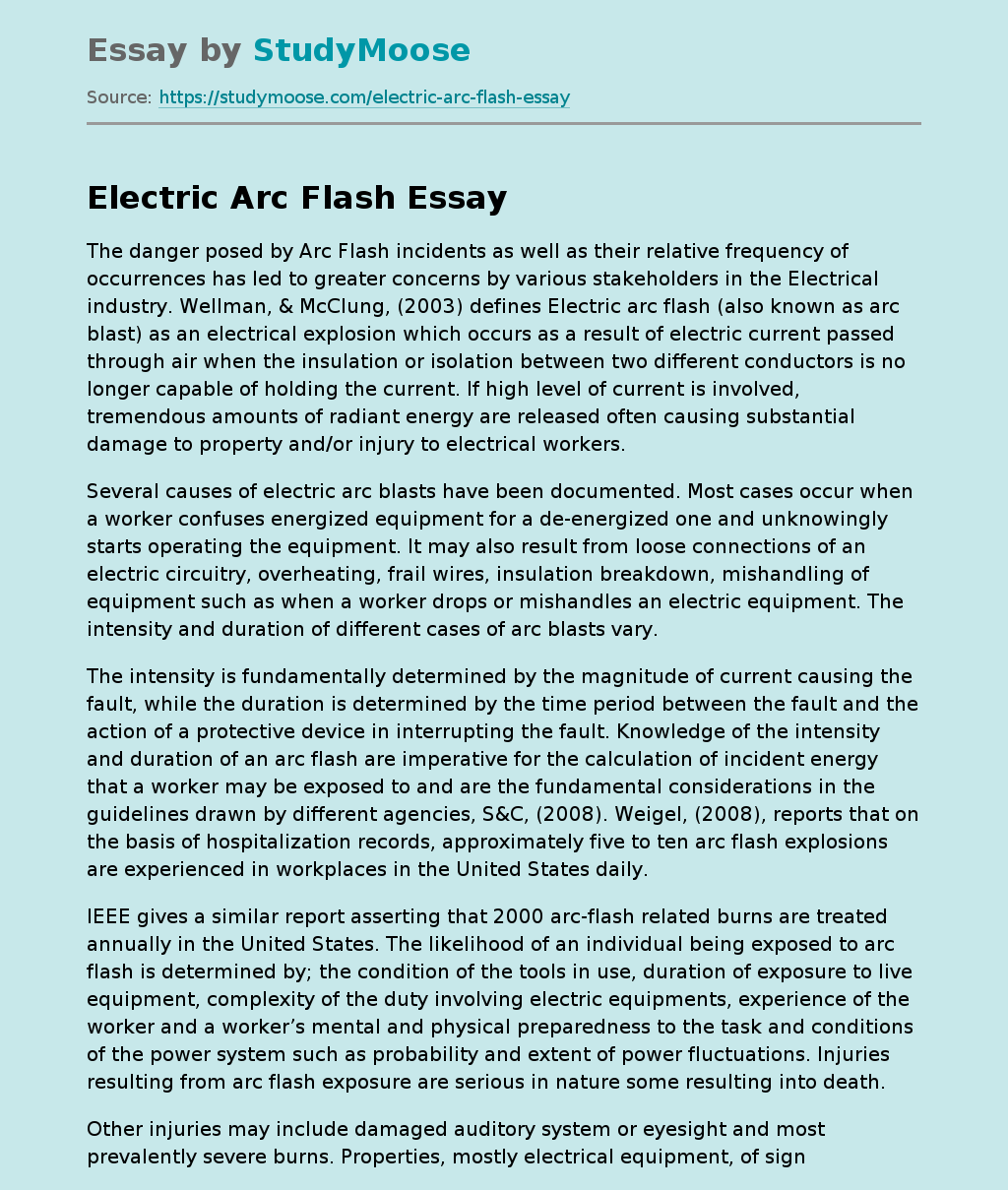