In view of these possible surprises, fiscal adjustment plans must thus be designed in a way that makes them sufficiently flexible to accommodate the impact of shocks, but also sufficiently resilient so as to preserve their medium-term fiscal consolidation objectives even when the underlying economic environment turns out differently than initially expected, Mauro (2011).

Don't use plagiarized sources. Get your custom essay on
“ Efforts to Reduce the USA State Budget Deficit ”
Get custom paper
NEW! smart matching with writer

During the Reagan era, the United States experienced a recession which occurred in 1980. The economy recovered from this recession, but experienced a rise in unemployment and payments for food stamps. The deficit increased, but only a small bit of that could be contributed to the recession. The 1980’s had a period of armistice development until the early 1990’s when inflation began to increase. The United States continued to experience brief periods of recession all the way up until 2009 and the Federal Government created solutions such as The American Recovery and Reinvestment Act of 2009; which provided relief for many businesses and individuals effected most by the recession.

The rapid growth of the national debt alarmed some politicians and created pressure for restricting Congress’s unlimited ability to spend. After many years of talk about a balanced budget amendment to the Constitution, which would require a balanced budget on an annual basis, Congress passed the Gramm–Rudman–Hollings Act in 1985. This act set a timetable for reducing the deficit from over $200 billion in 1986 to zero in 1990. Targets were set for each year. Failure to meet the targets would automatically trigger painful across-the-board cuts in most federal spending programs. However, the president and Congress were required to meet the targets only in the projected budget (based on assumptions about economic conditions), not the actual budget, Amacher & Pate (2012).

The United States experienced more downfall such as the terrorist attacks of September 11th and the continued was on terrorism in Iraq and Afghanistan. This alone sent us further into a financial crisis and caused politicians to go back and forth in debates, until President Obama and Speaker of the House John Boehner reached an agreement and signed into law on August 2, 2011, the Budget Control Act of 2011 immediately increased the debt limit by $400 billion. The bill also specified $917 billion in spending cuts over 10 years, among other proposals to further reduce government spending, , Amacher & Pate (2012). The United States continues to recover, but at the same time still go further and further into debt. The deficits continue to increase and as a nation continue to rob Peter to pay Paul. 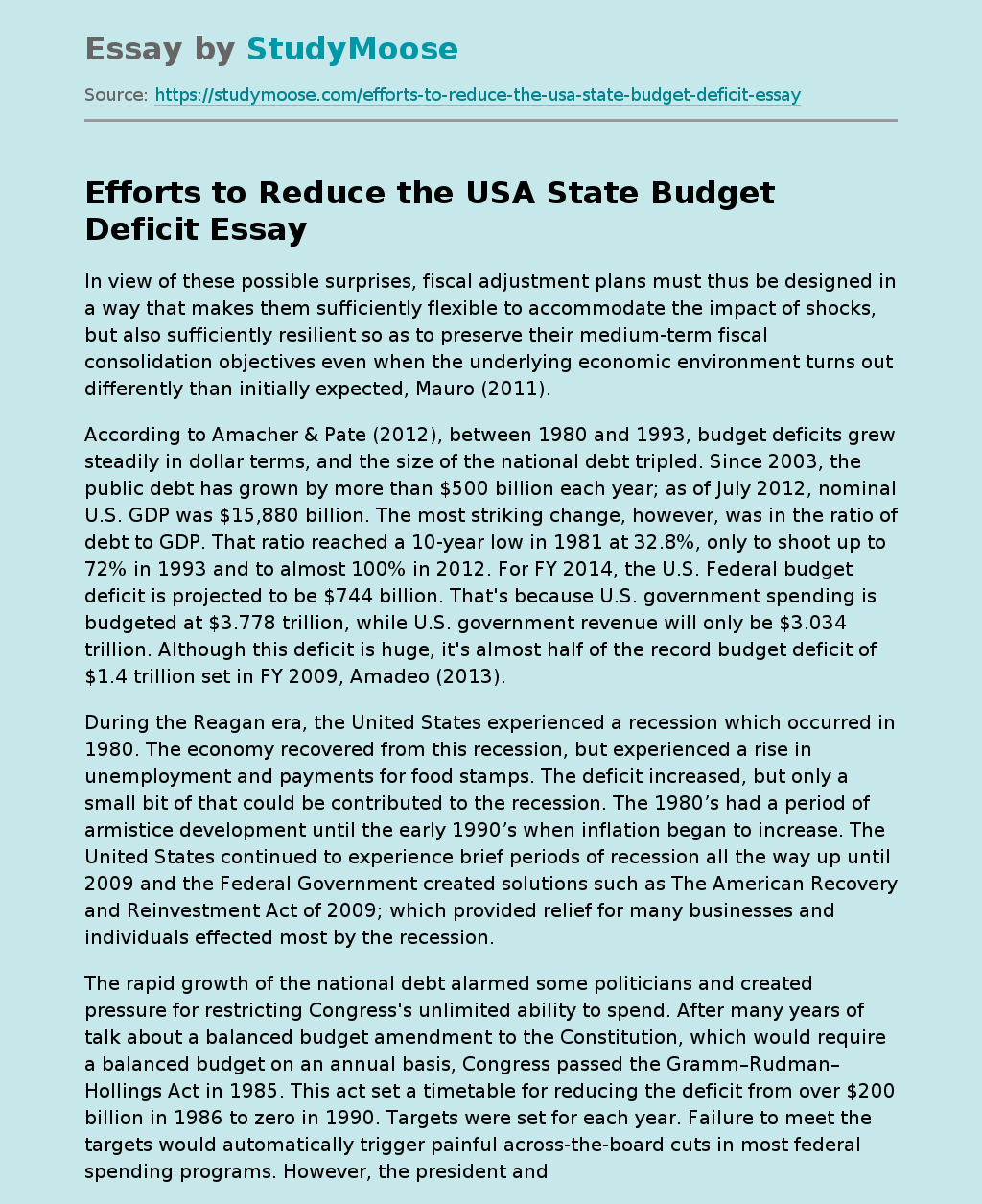