What do these terms mean to American politics? According to We the People, the definition of trust is “The people of the Americas’ mindset and hope in their nation’s government” (Ginsberg, p. 7). Recently, our nation’s political trust has declined and as mentioned by We the People, “Although many groups in America are supportive towards their government’s views, many still distrust their government’s abilities.” (Ginsberg, p. 7). Political trust is a major component of creating a successful democracy, but as mentioned in our class discussion, having a slight amount of mistrust in the government is necessary to provide an active democracy.

Don't use plagiarized sources. Get your custom essay on
“ Efficacy, Trust, and Political Behavior ”
Get custom paper
NEW! smart matching with writer

Although many individuals may believe that this type of information displays a negative connotation, it allows the members of society to make an argument and voice their opinions, whether it be through peaceful protests or voting in local elections.

In Parks and Rec, countless examples of political efficacy and political trust are used throughout each season. A specific example of political efficacy used in Parks and Rec is when Leslie held a town meeting about building a park on lot 48. Each member in the community was welcome to attend this meeting and speak their opinion on whether the park should be built or not. Many members in the meeting spoke their opinion on why or why not they believed that the park should be built. This meeting allowed members of the society to come together and voice their opinions, but also alter the decisions of the government to better represent the wishes of the people. Overall, this scene is a great example of political efficacy in the local community.

Political trust is another quality used countless times in Parks and Rec. A specific example is a very first episode when Leslie and Tom go to a public meeting and listen to the community questions, comments, and concerns. This is a very good example of political trust because it demonstrates how the members of the social trust that the government will make the best choice to support their needs. As seen in this episode, many needs that are requested can’t, unfortunately, be met and that is why political trust in the government slowly decreases, including Ann’s hope that the government will do something with lot 48 to prevent further injuries to any civilians.

My own sense of trust and efficacy is very dependable on who is in office. For example, if democrats fill up a vast majority of the office, my political trust will be higher because I tend to lean towards the beliefs and values of the democratic society. I will also be more confident in my political efficacy because I believe that democrats will abide to my beliefs and negotiate a solution that benefits the entire community. On the other hand, if Republicans were the vast majority in office, my political trust would most likely be lower, due to the fact that since we have different values, I may not be able to trust in them to make the best decision that benefits myself and my beliefs. My political efficacy might also lower because since a vast majority of liberals, including myself, want the people of society to have rights and power, the Republicans might not abide by this because it isn’t something they agree with, even with countless protests and political votes.

On the other hand, some people may not have a strong sense of political trust and political efficacy due to traumatic life events, such as natural disasters, police brutality, etc. An example may be an African American citizen who has experienced police brutality sometime in their life and decided to peacefully protest in order to speak up about the issue. After countless protests, no political action is taken to handle this issue, which is a major issue as to why citizens’ political trust and efficacy skyrocket down. Whenever citizens tend to face a challenging life issue, they expect to receive attention from politics, to prevent this issue from recurring. If no political action is taken to assist the citizen’s issue, people tend to grow frustrated and think to themselves, “What’s the point in speaking up about this issue, if no one is going to do anything about it?” Overall, whether your political trust and efficacy are high or low, the importance is still drastic and without them, we wouldn’t have a successful and productive democracy. 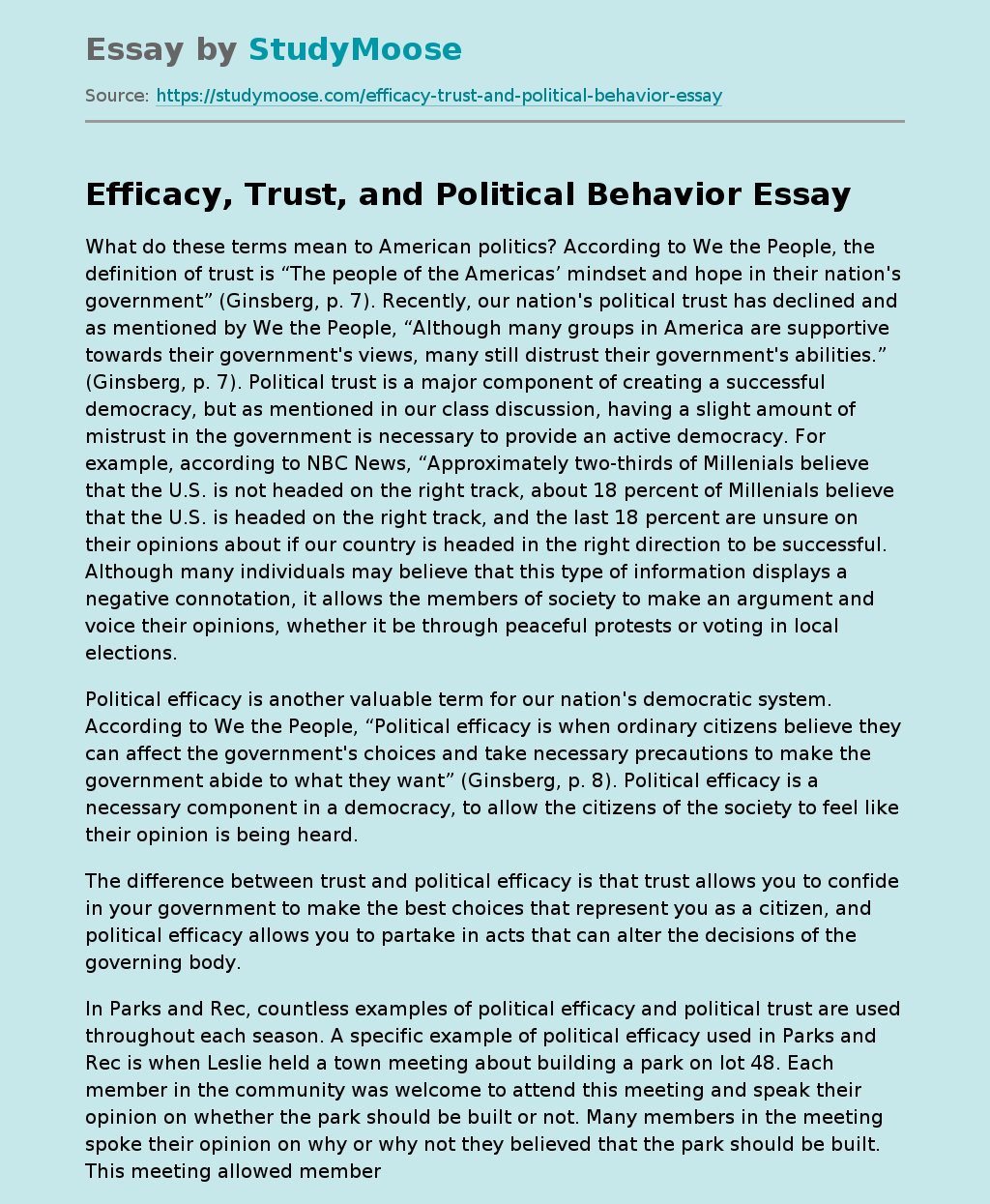