Effect of Temperature on Lipase: Theory, Hypothesis and Limitations

The higher the substrate concentration the more quickly product is produced (rate of reaction increases) until enzyme saturation is reached at which time more substrate has no further effect. Enzymes such as Catalase are protein molecules which are found in living cells. They are used to speed up specific reactions in the cells. They are all very specific as each enzyme just performs one particular reaction.

Catalase is an enzyme found in food such as potato and liver. It is used for removing Hydrogen Peroxide from the cells.

Don't use plagiarized sources. Get your custom essay on
“ Effect of Temperature on Lipase: Theory, Hypothesis and Limitations ”
Get custom paper
NEW! smart matching with writer

The prediction would be such that as the substrate concentration increases, the rate of reaction will go up at a directly proportional rate until the solution becomes saturated with the substrate hydrogen peroxide.

When this saturation point is reached, then adding extra substrate will make no difference. The rate steadily increases when more substrate is added because more of the active sites of the enzyme are being used which results in more reactions so the required amount of oxygen is made more quickly.

Once the amount of substrate molecules added exceeds the number of active sites available then the rate of reaction will no longer go up.

This is because the maximum number of reactions are being done at once so any extra substrate molecules have to wait until some of the active sites become available. Variables Independent Variable(s) Concentration of substrate Dependent Variable(s) Rate of enzyme activity Control Variable(s) Temperature pH Pressure Apparatus S. No Item Qty. Size, Capacity, Amount 1 Graduated cylinder 1 500mL, 500cm3 2 Metal Stand 1 – 3 Catalase from Chicken Liver.

Pour the hydrogen peroxide solution into the test tube containing the chicken liver and immediately put the cork with a transferring tube plugged into it connecting it to a rubber tube leading to a filled inverted graduated cylinder to measure the amount of gas in mL (cm3) formed. 3. Bubbles should start to rise up the tube and the water level in the graduated cylinder should move down. 4. Record the water level after every 30 seconds for a total period of 5 minutes. 5. Do the same for 4%, 6%, 8%, 10%, 12% and 14% and record the readings for them individually.

The reason that the number is less than two times could be put down to the fact that at 10% the Enzyme’s active sites may already be close to being saturated with Hydrogen Peroxide. There may also be some experimental error which causes the inaccuracies. After 10% the increase in the rate of reaction slows down. This is shown by the gradient of the graph going down. At this point virtually all the active sites are occupied so the active sites are said to be saturated with Hydrogen Peroxide. Increasing the Hydrogen Peroxide Concentration after the point of saturation has been reached will not cause the rate of reaction to go up any more.

There is a slight delay between pouring the Hydrogen Peroxide into the catalase, putting the bung on and starting the stopwatch. This will slightly affect all the results but as I carried out all the three steps in the same way for all the experiments it should not make any difference to the overall result. It is also impossible to precisely measure out the amounts of Hydrogen Peroxide and catalase each time. As the scale on the pipettes shows the volume to the nearest mm3 the volume of the solutions that I used should be correct to the nearest mm3.

The volume of gas in the test tube to start with is slightly affected by the amount which the bung is pushed down each time, if the bung is pushed down further then the volume in the tube will be less so the 30cm3 of gas is reached faster. Due to the fairly slow speed of our reactions it is only possible to measure the time of the reaction to the nearest 0. 1 second even though the stopwatch shows the measurements to the nearest 0. 01 second. Human errors such as inappropriate readings, time difference in readings, stopping flow of air by accidentally compressing rubber tube… could also have been made

Effect of Temperature on Lipase: Theory, Hypothesis and Limitations. (2018, Sep 18). Retrieved from https://studymoose.com/effect-of-temperature-on-lipase-theory-hypothesis-and-limitations-essay 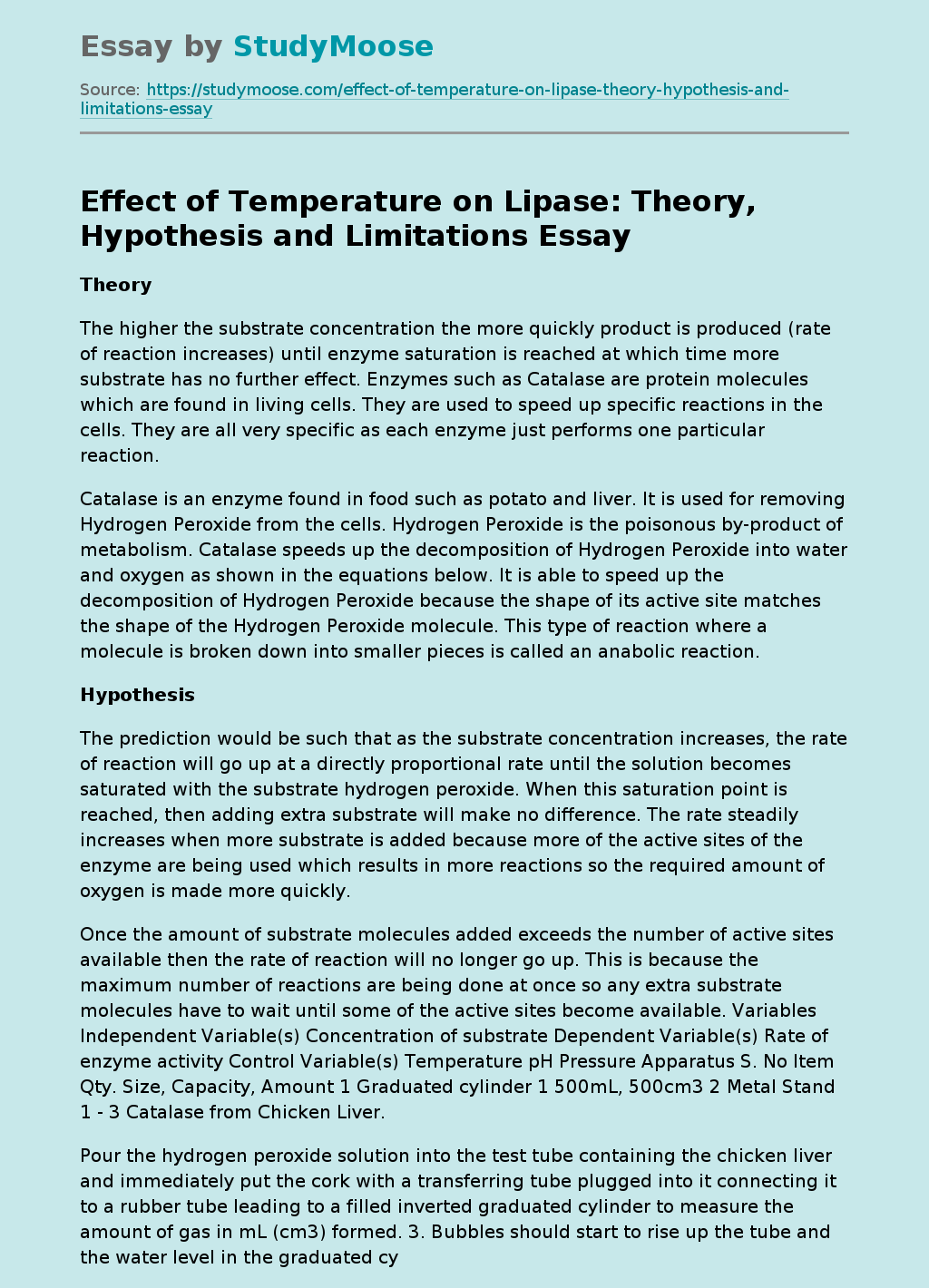