Effect of Power and Politics in an Organization

Turn in your highest-quality paper
Get a qualified writer to help you with
“ Effect of Power and Politics in an Organization ”
Get high-quality paper
NEW! AI matching with writer

Organizational politics can have a detrimental affect on employee’s, moral, loyalty, and trust.

The struggle of power and influence by competing groups creates politics. Some believe that the practice of politics can be cunning and deceitful, while others believe it can be a motivator with positive results.

Competing groups require more than convincing facts in order to get management to make a decision; the group that can influence and pollute the facts of other groups will be more successful (Robbins, 2001).

Office politics or effective management; some of these terminologies are used when office politics are obvious and things go wrong; “kissing up”, apple polishing, passing the buck, covering your rear, creating conflict, forming coalitions, cunning, arrogant and scheming. These are a some terminologies associated with obvious office politics with positive results; developing working relationships, encouraging change and innovation, improving efficiency, facilitating teamwork, planning ahead, astute, and practical-minded. (Robbins 2001).

Robbins, 2001, states that there are two different forms of office politics legitimate and illegitimate politics. The normal everyday politics such as “complaining to your supervisor, bypassing the chain of command, forming coalitions, obstructing organization policies or…” (Robbins 2001). Illegitimate politics are acts of sabotage, whistle-blowing, different types of protest such as group coming in to work late or not coming in at all.

The negative impacts can be described by past scandals resulting in the crash of corporations, non-accountability in the accounting industry, and lack of ethical direction from boards of directors and have cost thousands of people their jobs and taken millions of peoples’ retirement funds to zero. 401k plans that held the stocks for retirement were all depleted from the unethical practices of Enron. How, with all the checks and balances that are supposedly in place within the government, did Enron happen? The answer could very possibly be greed, fear, or just following the crowd. This can be related to the politics played upon by power.

On a positive side of power and politics organizations have also been found to be responsible and able to promote trust. Take Johnson & Johnson for example, when Tylenol was tampered with leaving several people ill, they did not listen to their lawyers who were trying to prevent lawsuits, they admitted there was a problem and pulled all products from off the shelves. They did not hide behind the organization shirttails’ of attorneys’, they faced up and proved to society to be trust worthy. Which in turn, they gained respect from the general public.

Scandals grow larger and more intensive day-by-day for organizations. In part certain government laws have provided guidelines to follow as a check and balance for the unethical behavior amongst large organizations. Sarbanes-Oxley being one to keep company’s honest in bookkeeping and allowing documentation to be proof that the organization is doing what is ethical. This will also be a source of insurance that individuals will not
loose everything like those thousands of people did in the demise of Enron.

Code of Conduct, Intentions, and ObjectivityIf the employees accept gifts, the company or organization wants to make sure the employees are in compliance with the policy or law. Which is also called “Code of Conduct” and this is to ensure that employee’s decisions will not create a conflict of interest. The code strengthens standards and includes measures to protect employees from outside pressure, such a solicitation for personal affairs and the offering of gifts. Most companies have a strict code of business ethics and conduct. The code discourages employees from accepting gifts that could be seen as an attempt to manipulate business decisions. Some companies forbid their employees to accept any gifts of any value. If gifts are received or if employees are undecided about whether they can accept the gift, the incident must be reported to the manager or supervisor.

“All managers should establish a written policy limiting the acceptance of gifts and entertainment to items of small value. Managers should consider creating limits, for example-an amount per time period, per vendor for accepting gifts and prohibit the acceptance of any cash gifts” (Unswerving Loyalty, 2006). Employees should be required to document or disclose to the manager, the acceptance of any gift or entertainment. However, this is not meant to stop managers from maintaining multiple business relationships with a client, as long as possible conflicts of interest are managed and disclosed. Violating the code of conduct, regarding gifts if not reported can result in punishment. The employee can be penalized and there will also be an investigation. Providing clients with a code of ethics, sets a framework for how the manager conducts their business is an important step in developing the trust and confidence necessary for a successful investment management relationship.

Organizations must make sound business decisions and have good intentions. They must have processes in place in order to insure upper management remains objective. Organizations can be easily influenced by outside forces when having to hire employees, contractors, or expansion. Executives and upper management must be able to decide, when making business decisions, on whether to decision will benefit the organization as a whole or suit their personal or future needs. Organizations of today have to deal with a high amount of turnover in their executive positions. After these positions are vacated and new individuals are appointed is when an organization may finally find information on whether their executives were making sound organization decisions or decision that benefited them and assisted with their future gains or employment.

An example that surfaced this year is the scandal involving the huge insurance company named AIG. According to (Scherer, 2005), the scandal links two of the world’s richest men. According to Forbes Magazine, Buffet is the world’s second-richest person with assets of $41 billion. Greenberg is ranked 132nd in the world and 59th in the US with assets of $3.1 billion. Using a position or influence within an organization can be considered a conflict of interest. In other words, conflict of interest exists when a board member or officer personally benefits, or is perceived to personally benefit, from an activity of the organization (Colbert, 1999).

Personal power is used within an organization for personal gain as well as to benefit the organization. Expertise, rational persuasion, and reference are forms of personal power used by management to control the behavior of subordinates. Possessing the knowledge and experience needed uses expertise power. Expert power is increased when subordinates are denied access to critical information or to key contact persons. Rational persuasion can be effective by gaining the trust of the subordinates. Through reverent power, subordinates are controlled because they respect, admire and want to please their managers.

It is human nature to want to succeed and achieve. Some individuals have been fortunate to work for an organization that is respected by the community from an external perspective and feel treated and respected as a part of the organization from within. Credibility can be an important part of an organization. There are often choices that might have to be made, for many different reasons, as we have seen that can lead to the most well respected individuals and organizations to fall. Deciding on what might be in the best interest and not necessarily ethical can be a difficult decision made by one or a few. What is legal and what is ethical affect nearly every aspect of today’s life. A few examples are the use of the internet, ethics in medicine, and ethics within an organization. Putting a legal box around what is ethical conduct is a challenge that many companies face today.

There are many aspects of an organization, both internal and external, that will affect their success. Some of these are out of their control, but quite a few can be controlled within the organization. Organizations must insure decisions are not based on personal agendas or outside influences offering certain perks for contracts. Power and organization politics can have both a negative or positive affect on an organization. Through all the decisions an organization will make, they must insure they do not compromise their code of conduct, code of ethics, or decrease employee moral.

Effect of Power and Politics in an Organization. (2016, Jul 29). Retrieved from https://studymoose.com/effect-of-power-and-politics-in-an-organization-essay 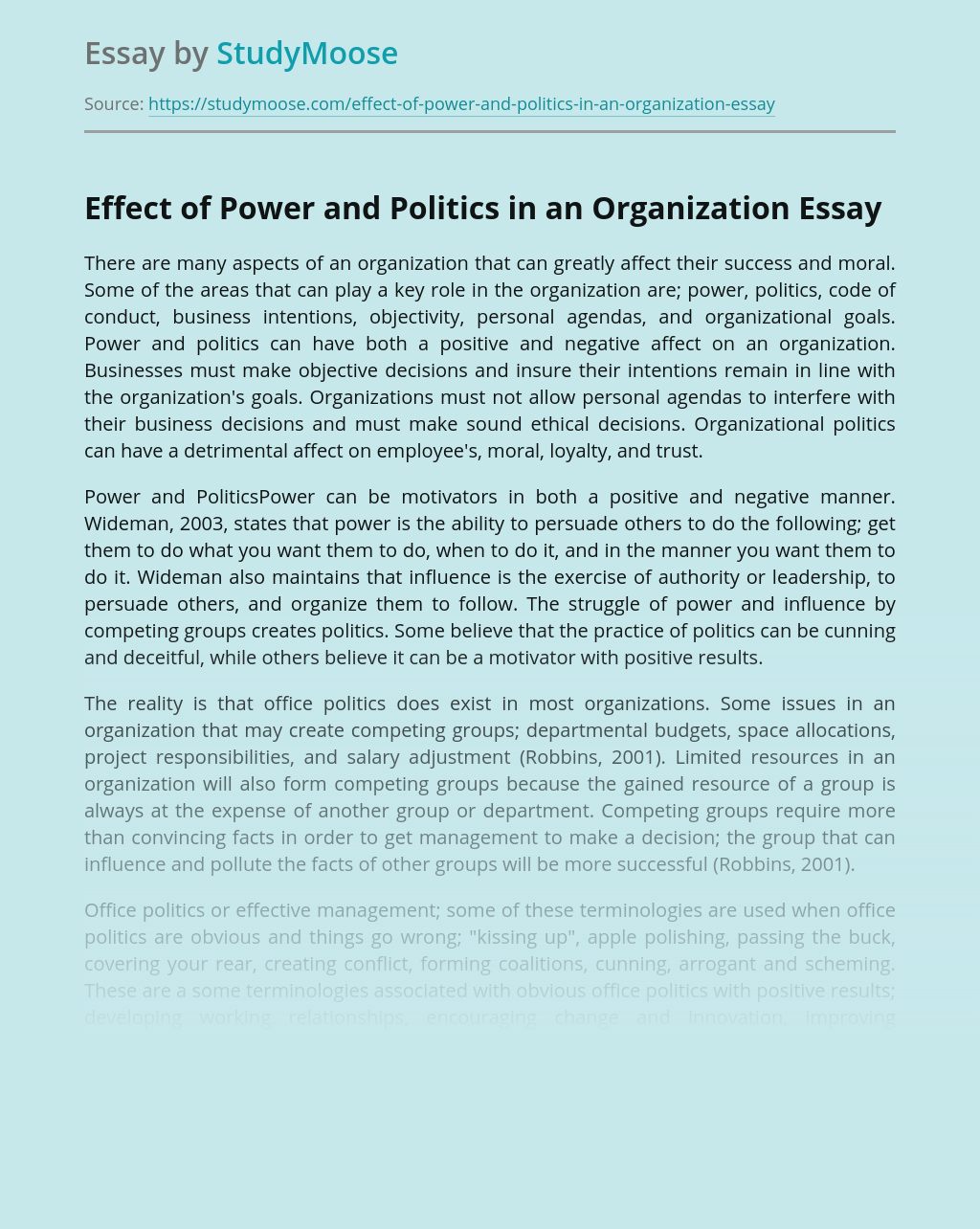 Turn in your highest-quality paper
Get a qualified writer to help you with
“ Effect of Power and Politics in an Organization ”
Get high-quality paper
Helping students since 2015
Stay Safe, Stay Original