Education Was a Privilege for Women in the Mid 1800s

Adrienne Rich is a well-known feminist who is considered as one of the major contributors to the second wave of feminist movement and on 1977, Rich delivered a speech called “Claiming an education” at the convocation of Douglass College which was considered as the Harvard University for women back then. Rich’s education interests in poetry started because her father who gave her encouragement. She, herself never had an encounter with a female professor when she was in college. At Douglass university even though it was considered as a women’s college it was still dominated by men and besides the fact that they considered teaching in a women’s university as a second-rate career or a horrible career for professors.

Don't use plagiarized sources. Get your custom essay on
“ Education Was a Privilege for Women in the Mid 1800s ”
Get custom paper
NEW! smart matching with writer

Adrienne Rich’s speech was intended to enlighten the professors who teach in any women’s college in order for them to take female students seriously. In the speech she mentioned for the professors to stop mistreating women, they should not give out low expectations for female students and they should believe that women’s opinions and experiences should be treasured and valued.

Rich, brought a new perspective to the professors when it comes to teaching and made sure that she persuaded them to be more equal and professional when it comes mentoring female students. Chan 2 In the text, it was emphasized that women are being objectified in universities by their male professors. At the end of her speech, she mentioned that “ Many tend to eroticize their women students—to treat them as sexual objects—instead of demanding the best of their mind ”.

Here she accentuated that instead of encouraging female students to speak their mind out, to be opinionated, to criticize or express themselves, professors would ignore or disregard their opinions or would not even let them enhance the students’ education but they would just sexualize them even though not physically, but mentally which is not appropriate and unfair to the students. In order to cease professors mistreating female students like this, Rich is suggesting here that they should treat women with respect and give them an opportunity to speak up and put a stop on setting low expectations for them.

Professors have learned from other professors who are trained in the male-centered tradition, so this tradition was just passed down to generations of instructors. Most of these professors do not give females freedom of speech about their ideas or opinions. On her speech, she said that “We may resign ourselves to low expectations for our students before we have given them a chance to become more thoughtful, expressive human beings”. To put it on another way, professors who would not let his student question information or criticize thoughts of other people have failed to do their job because they believe that women cannot excel more than what they have set. One of the reasons this is important because letting students have freedom of learning by asking questions or criticizing is the most important thing that they can use in everyday life which they can be trained for thinking critically. By giving them a goal or to set high expectations will enhance their knowledge and find a motivation to strive for the better. Chan 3 Rich is suggesting here that as instructors, they should believe that women’s opinions through their experiences should be treasured and valued. Women should be appreciated and valued.

As professors, they should support their students either men or women because they are seeking education for them to be knowledgeable, for their opinions to be heard and to better themselves. At the end of her speech she said: “But for her to do this, her teachers must be committed to belief that women’s minds and experience are intrinsically valuable”. Rich was pertaining to a female student when she said “her”. In other words, Professors are very important in the education system because they are the foundation of learning of these female students, they should learn to value themselves and consider themselves as important as men. Women’s opinions are very important because same as men they are people too, who have minds and experiences that can be very vital in their learning or even professors might learn something from the students.

In order for professors to take female students professionally, they should be open to women’s ideas and experiences because they are essential to their education. Towards the end of Rich’ speech, she united female students and the professors that they are both important in the education system and at enhancing each other’s knowledge. This was emphasized in her speech when she said “ —if both students and teachers in large enough numbers are trying to fulfill this contract. This contract is really a pledge of mutual seriousness about women, about language, ideas methods, and values”. In other words, education is just not a one-sided relationship; we just cannot blame students for not claiming education and not taking themselves seriously. For professors—professionalism is a very vital attribute for being a Chan 4 effective mentor. It is not right just because instructors are mentoring female students so they cannot express their ideas or opinions or mentors will just ignore the opinions coming from a female because of her gender or even does not have the right to be expressive is a wrong method of teaching and failing our education system.

The significance of this is that we should not limit somebody’s education or knowledge-based on gender, females are people who have minds and experiences that should not be wasted. They have the right to set high expectations for themselves, claiming education by being opinionated able to have free-flowing ideas which they can express freely and be worthy in this society. Rich ended her speech by concluding her purpose and stated: “It is our shared commitment toward a world in which the inborn potentials of so many women’s minds will no longer be wasted, raveled away, paralyzed or denied”. In doing this, Rich is supporting the notion that for professors know the fact that females are capable of learning and being responsible by the means of treating them professionally and not limiting their capabilities, they should encourage and motivate them to set high standards and strive for the better and believe that women’s minds should not be disregarded because those opinions can be very essential in their education.

Education Was a Privilege for Women in the Mid 1800s. (2021, Dec 11). Retrieved from https://studymoose.com/education-was-a-privilege-for-women-in-the-mid-1800s-essay 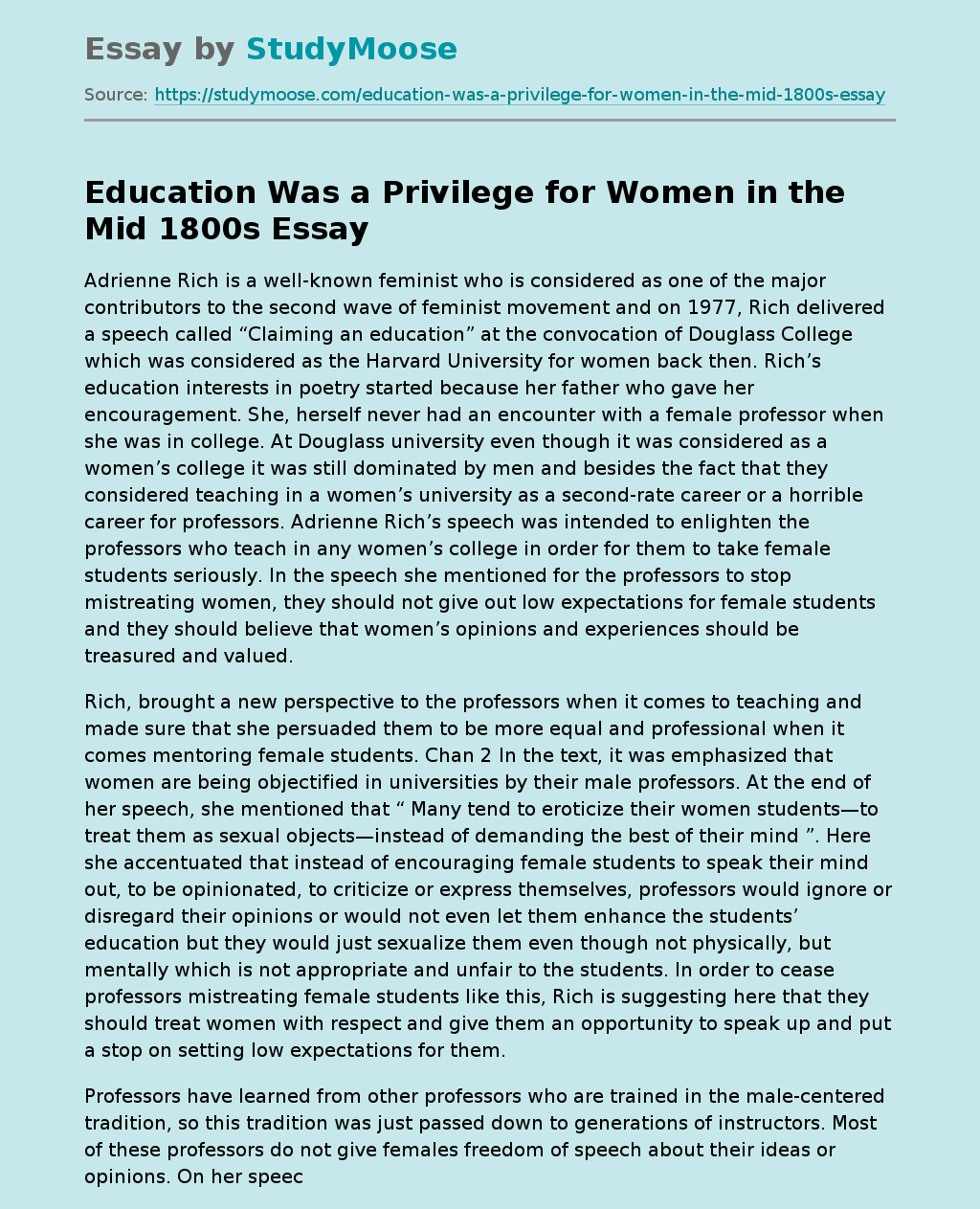