Economics is part of business that deals with the production, distribution and consumption of goods or services in the society (Paul, 2008). Economics contains many aspects that helps define different markets, which attribute to the applying of goods and services and also deal with individual needs and some economic issues. Free market economy has free reign on production and distribution of goods or services. In this market, they can take their own decisions on what to purchase and produce.

Don’t waste time
Get a verified writer to help you with Differentiate between free market economy and mixed economy
Hire verified writer
$35.80 for a 2-page paper

According to Paul (2008) free market economy is also called capitalist economy. Each exchange is done between two people or between two groups represented by agents. Each party undertakes the exchange because they expect to benefit from another. The market economy enforces its own private contacts and ownership. The government only plays a neutral role in its legislation economy and administration. However, the buyers and sellers in this market do not pressurize each other in case of obtaining each other’s property rights without the use of force, threat or fraud.

Their laws of demand and supply regulate the production of their goods.

This kind of economy is practiced by many countries but is mostly initiated by the United States economy. Their own agents do however, the concerns like maintenance of employment. Mixed economy on the other hand has a combination of communist, market and traditional economics. The mixed economy has both private and owned companies. The government plays the key role in their market (Paul, 2008).

They are also limited to free decision since the government and private organizations are the only ones who intervene. The mixed economy is responsible for paying taxes that they get back as s benefit through infrastructure, social programs and government services. However, the government is involved in the planning and even the resources. It is involved in the concerns such as maintenance of employments standards environmental protection and competition. The mixed economy does not define its own policies, laws and limit power by the government.

Joint supply is whereby goods are produced or supplied together (Daniel-Kagbare, 2014). The products are produced in a fixed proportion since they cannot be varied. This shows that the quantity of one product can be increased with the expense of the other. An example can be that of a cow. One can breed a cow for either meat or hide. This shows the product can yield two or even more outputs. If the supply of the product increases, the output they produce will definitely also increase. The rise of productions is in response to increase in demand. The joint supply affects demand differently. Decrease in supply depreciates demand while increase in supply increases the demand of goods. However, joint demand on the other hand refers to products or commodities that are complement in production and in use.

The commodities produced are used together to satisfy the needs and wants of consumers. One commodity cannot be used the expense of the other. According Daniel-Kagbare (2014) increase in demand for one commodity increases the demand for the other. The commodities are designed to design to satisfy the same want. An example is sugar, milk and coffee. They work as complements. If there is decline in the supply of sugar in the market, then the demand for milk and coffee is likely to decline. However, price affects joint demands differently. A rise in one commodity leads to fall of price in the other product. A good example is; increase in price of milk decrease the price of sugar and coffee while the decrease of the price leads to increase in the price of sugar and coffee in the market.

According to Banerjee (2014), they are very important to managers since they provide a rough thumb. That is, if the price is inelastic, raising price slightly raises consumer expenditure which attributes to a higher revenue. However, if the price is elastic, lowering of its price slightly alters consumer expenditure by raising it leading to firmness in revenue. According to Barnejee (2014), there is two other price elasticity of demand. That is the income elasticity demand and cross- price elasticity demand. Thee income elasticity demand is whereby impact of change in income level on the demanded quantity keeps the price of a product fixed. Cross- price elasticity is used to measure the effects or influences of change in price of another good on the demand of a particular product.

Explanation of difference between positive and negative externalities

However, positive externality takes place when the private marginal enjoyed from consumption or production of goods or services exceeded by benefits as a whole to the society (Besanko et al, 2011). In this case, the third party apart from the buyer and the seller is included in receiving a benefit because of transaction. An example of positive externality is education and training provided to employees in an organization. This is because, the education and training reduces expenses that an organization needs to encounter or bear in training individuals to make them efficient and productive. Increasing productivity attributes to more efficient use of products such as raw materials in an organization raising the living standards benefiting a greater society. Apart from that, innovation in technologies is also part of positive externality. Having knowledge in technology help, lower production cost, result in better standards that benefit producers and consumers leading to better qualification.

Explanation of difference between diminishing marginal returns and return to scale

Diminishing marginal return is whereby a firm or organization needs to combine variable input with a fixed input. It is based on the short-run production of a firm. When productivity variable is more used in a short-run production; variable input declines. When productivity of variable input decreases, high cost of productivity rises and also a high supply of price is needed. According to Basenko et al (2011), usage of one input increases the quantity of other inputs such as land and capital that are held fixed. These decrease the input of marginal product. However, rate of technical substitution of labor is equal to the ratio of product of labor to marginal product of capital. This shows capital can be reduced for every increase in every unit in quantity labor and hold output quantity constant.

Return to scale refers to what takes place when all inputs are increased by a certain percentage (Besanko et al, 2011). When all inputs change in the same proportion leads to scale of production. Nevertheless, change in total output due to scale changing results in return scale. When all inputs increase in the same proportion the total product may increase the rate, remain constant rate or diminish the rate. This may occur because the higher efficiency obtaining as a result moving from one level to another; that is from small operation to a large scale operation . Decrease in return may occur if production depreciates as production expands. Also it may occur in a firm or organization expands and it becomes difficult for it to be managed as one single unit.

In order for business to expand and economic sector to improve, negative externality need to be taken care of. The government should initiates rules to cut off the behaviors of people or organization after imposing a risk to the society and other organization. A right aspect to take is to punish the organization that pollute environment by taxing them heavily for their consequences. This will help secure other people’s business and even health. The business people should put into consideration aspects like elasticity of demand in other to make sure that the demand or price does not affect the business in a negative way.

Daniel-Kagbere, T.E. (2014). A dictionary of economics and commerce. AuthorHouse 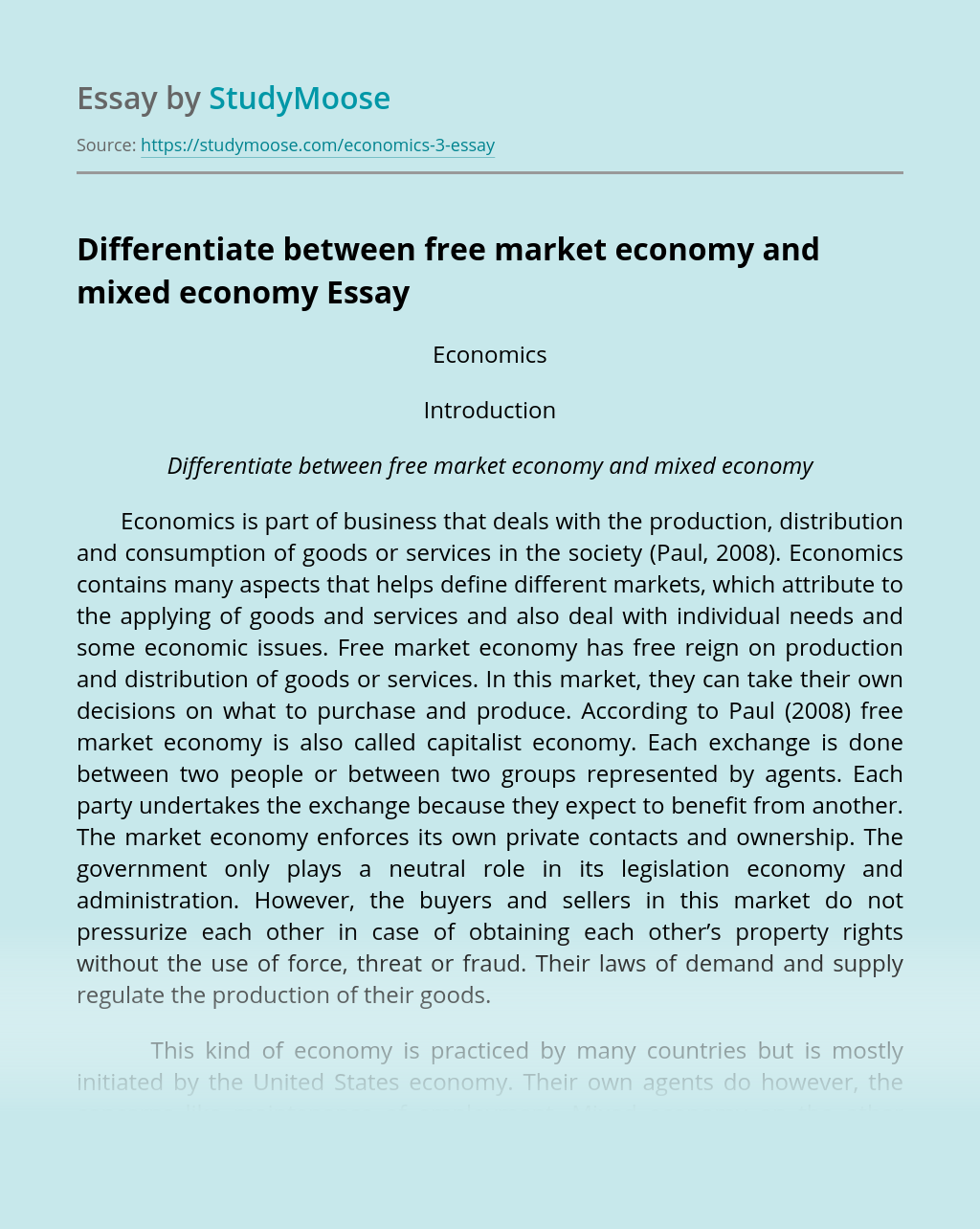 Don’t waste time
Get a verified writer to help you with Differentiate between free market economy and mixed economy
Hire verified writer
$35.80 for a 2-page paper
Stay Safe, Stay Original