“A policy decision involves action by some official person or body to adopt, modify, or reject a preferred policy alternative.” (Anderson, 125)

Turn in your highest-quality paper
Get a qualified writer to help you with
“ Rational Comprehensive, Incremental, and Mixed Scanning Theories ”
Get high-quality paper
NEW! AI matching with writers

Within this decision making process there are theories that are the quantitative models of such like: the rational comprehensive theory, the incremental theory and the mixed scanning.

(1) The decision maker is confronted with a problem that can be separated from other problems or at least considered meaningfully in comparison,

(2) the goals, values, or objectives that guide the decision-maker are known and can be clarified and ranked according to their importance,

(3) the various alternatives for dealing with the problem are examined,

(4) the consequences (costs and benefits, advantages) that would follow from selecting each alternative are investigated,

(1) selection of goals or objectives and the empirical analysis of the action needed to attain them are closely intertwined with , rather than distinct from, one another,

(2) the decision-maker considers only a few of the alternatives for dealing with a problem, which will differ only incrementally (i.

(3) for each alternative, only a limited number of “important” consequences are evaluated,

(4) the problem confronting the decision-maker is continually redefined.

(5) there is no single decision or “right” solution for a problem. The test of a good decision is that various analysts find themselves agreeing on it, without agreeing that the decision is the most appropriate or optimum means to an agreed objective,

(6) incremental decision-making is essentially remedial and is geared more to ameliorating present, concrete social imperfections than to promoting major future social goals.” (Anderson, 129) Decisions made in the United States as a pluralist society are given and taken in joint decisions in the incrementalism theory also seen as a realistic decision-maker because it lacks resources, time and intelligence.

The mixed scanning combines both the rational-comprehensive and incrementalism theory. Etzioni, a sociologist describes that the decisions making in incrementalism theory better details the interest of people more powerful and organized groups, leaving behind the interests of underprivileged people including unorganized groups. While the mixed scanning will approach decision making with both theories in mind providing for high order this also allows for both theories to be used in different instances taking into consideration that the dimensions of the implementation of their decisions. (Anderson, 130-131)

In my opinion the mixed scanned theory balances out the best segments of both theories, utilizing the strong points of each for a better decision making outcome. 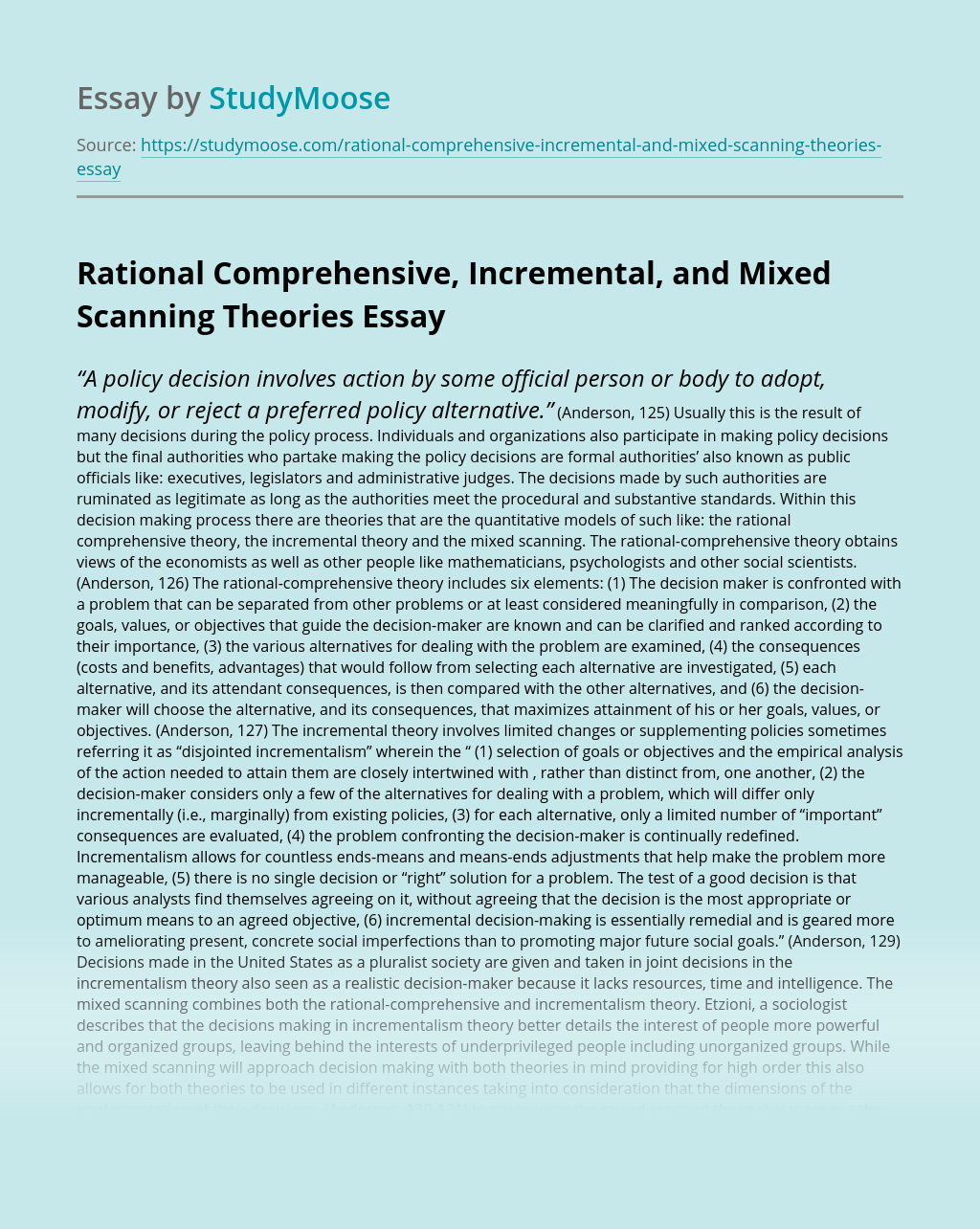 Turn in your highest-quality paper
Get a qualified writer to help you with
“ Rational Comprehensive, Incremental, and Mixed Scanning Theories ”
Get high-quality paper
Helping students since 2015
Stay Safe, Stay Original